Bradley Beal's scoring, and the Wizards are uniquely connected 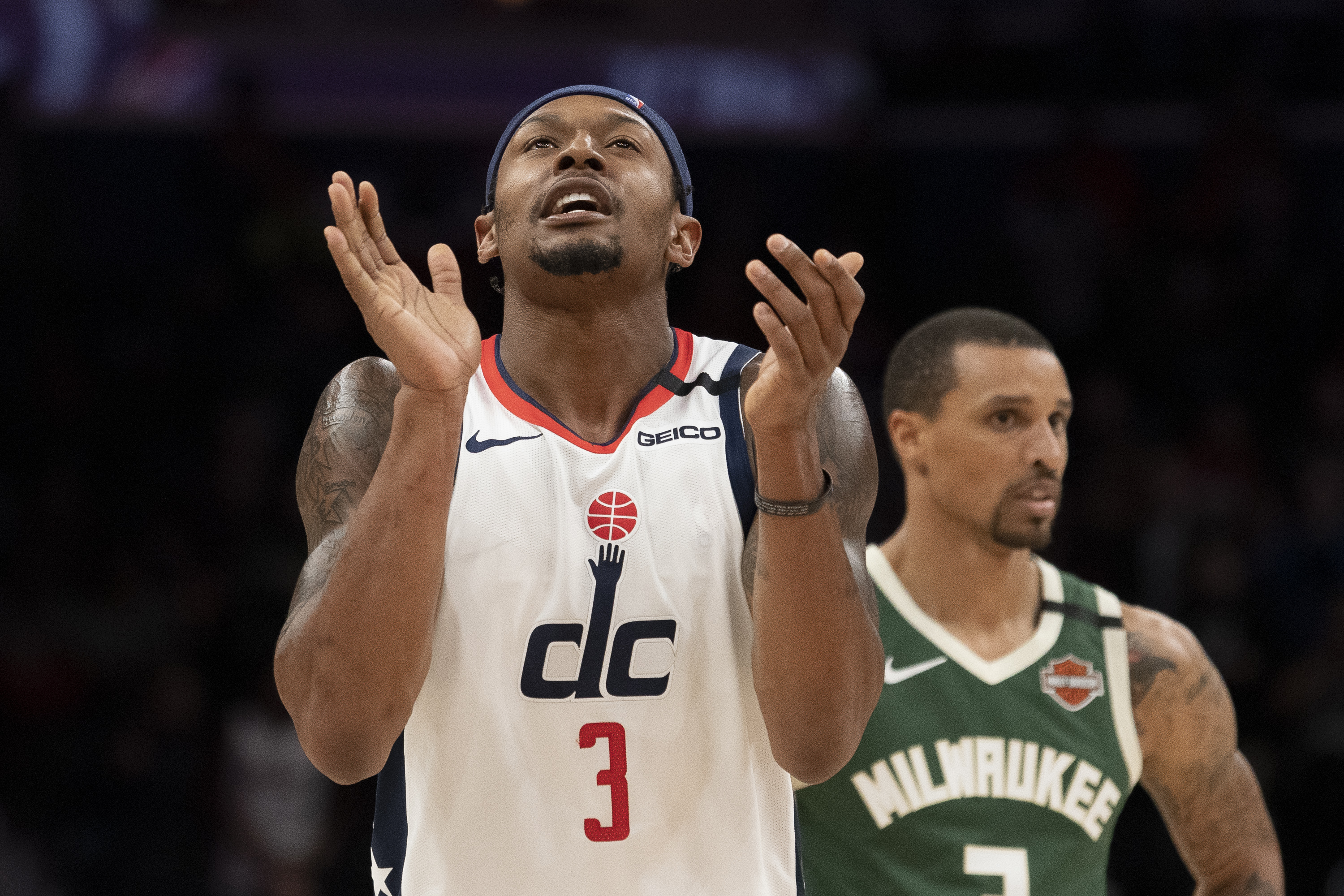 Bradley Beal's scoring, and the Wizards are uniquely connected

The Washington Wizards are a completely different organization under the leadership of general manager Tommy Sheppard. That does not mean that the team has not carried over tendencies of underperforming from recent seasons. No one was expecting the Wizards to make a lot of noise this year without five-time All-Star John Wall, but opportunities have presented themselves to Washington that they have thus far squandered.

The Eastern Conference is bad, like really bad. Besides a handful of teams, there is not much difference between teams 7 through 15. Two sub-.500 teams will make the playoffs because of how bad the conference is. That means Washington had an outside chance of sneaking in as the No. 8 seed. They were 20-33 at the All-Star break in shouting distance of No. 7 Brooklyn and No. 8 Orlando. The Wizards follow up their 5-2 stretch heading into All-Star with three straight losses, two to bad teams (Cleveland and Chicago).

What is astonishing is that the game Washington came closest to winning was against the best team in the NBA currently in the Milwaukee Bucks.  D.C. came back from 20 down to force overtime against reigning MVP Giannis Antetokounmpo. The actual crazy part is that Bradley Beal has set career-highs in points on back-to-back nights with 53 points in Chicago and 55 points against the Bucks all in the span of 27 hours.

That is not an unimpressive feat. The only other NBA player to score 53+ points in back-to-back nights was Wilt Chamberlain. Only Wilt and James Harden have ever had back-to-back 53+ point games. Chamberlain (many times), Elgin Baylor, Bernard King, Michael Jordan, Kobe Bryant, and Bradley Beal are the only players to have 50+ on back-to-back nights. Not similarly though, Baylor, King, Jordan, and Bryant won both of their games. Beal and Washington had lost both games in the back-to-back.

Some will make the argument that Beal is a ball stopper and doesn’t help the development of the team if he is just point hunting. I don’t pay too much mind to that because people said the same thing about John Wall having empty stats (and that the Wizards were better without him). Moreover, and despite his visible frustrated expressions on the bench, Beal said he would throw away both his 53 and 55-point performances for the victory. He said it after both games. It is absolutely the politically correct thing to say, but I don’t think this is an act with the snubber All-Star. I think Beal would much rather be one game back in the loss column of the playoffs instead of on a three-game losing streak with filthy individual stats.

It is not getting a lot of attention, also because it sounds too politically correct, but Beal is accepting some of the blame. He agrees his defense was lacking against the Bulls and he agreed that he had some bad turnovers at worse times. Even on a play where he could have been selfish and shot a game-winner in regulation, Beal dumped it down to a cutting Rui Hachimura who was flashing ‘wide-ass open.’ The rookie was absolutely destroyed by Robin Lopez who emphatically blocked the shot attempt. Hachimura knows he has to go up stronger, which was a point of emphasis for him early in the season, but Beal shouldered some of the blame for saying he should not have lobbed it in, but put some zip behind the pass.

At the end of the day, Bradley Beal is demonstrating himself as ‘one of the elite scorers in the NBA’ as Bucks head coach Mike Budenholzer put it pre-game. The Florida product also remains committed to Washington. He’s starting to have roots here both on and off the court from being the franchise’s second all-time leading scorer to mentoring area high school students. It would take a lot of bad for things to sour so much that Beal jumps ship before getting another taste of five-time All-Star John Wall. The Wizards have a legitimate chance of making the second round of the playoffs next season with a core of Wall, Beal, Hachimura and maybe Davis Bertans.