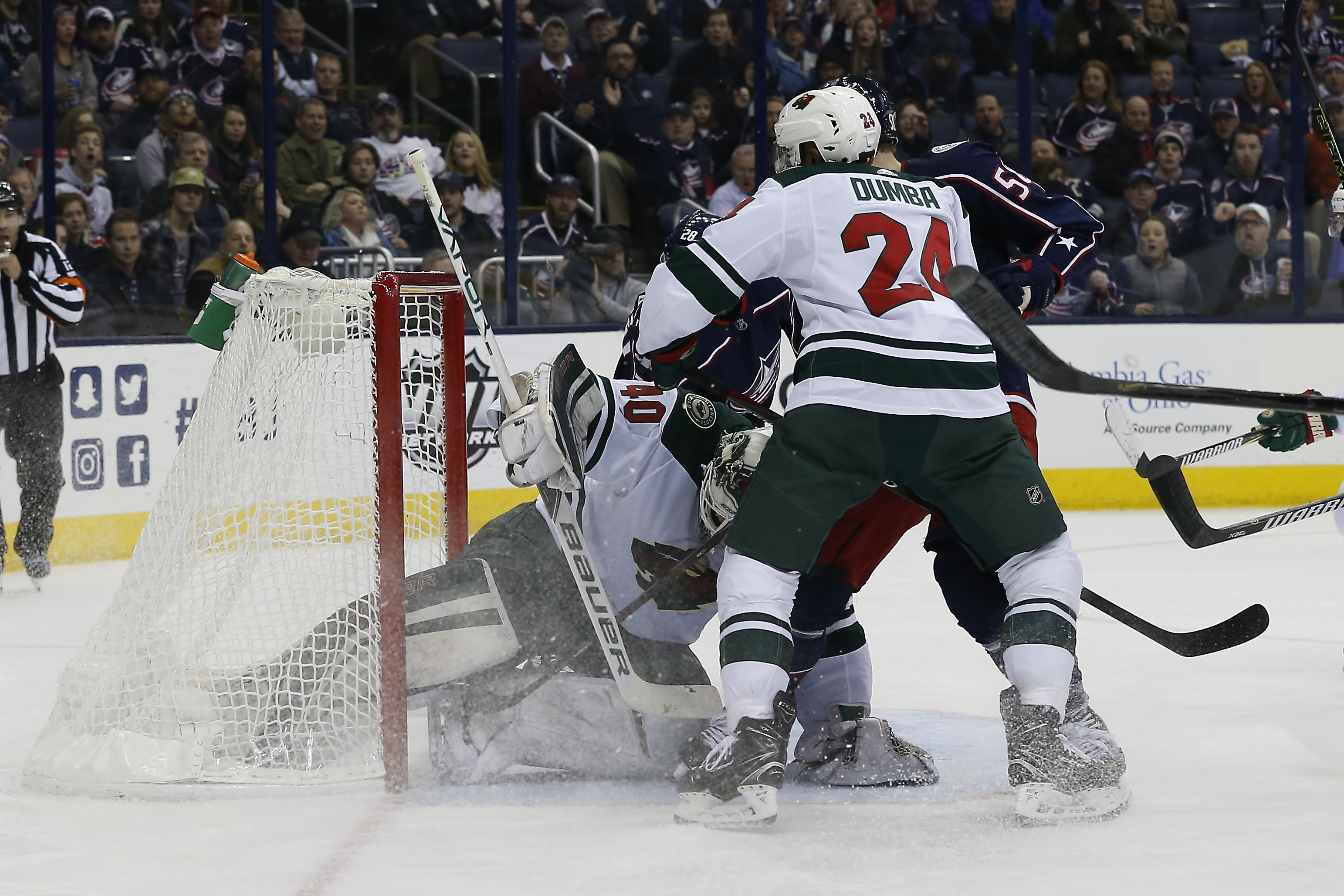 The NHL Trade Deadline has come and gone and while many players found themselves caught up in the madness, many more were relieved not to hear their name called that day.  I mean, who would want to find out on Twitter or TSN / Rogers Sportsnet that your career was about to relocate?  Yet for Minnesota Wild fans it was pretty boring as no one got moved.

The Columbus Blue Jackets come to town after some minor changes of their own as they parted ways with Sonny Milano and fringe forward Markus Hannikainen sent to the Arizona Coyotes for Devin Shore and a conditional 7th round pick.  No doubt that has to affect the chemistry and confidence of both teams as they head into the home stretch of the season.  Can the Wild regroup or will they look like a club that is just waiting to golf at season’s end?

1st Period Thoughts:  Jordan Greenway would make a great cross-ice pass to a wide open Zach Parise who was denied by Matiss Kivlenieks.  The Wild kept attacking and it was Kevin Fiala feeding a puck down behind the Columbus goal where Eric Staal swung out front and got a lucky bounce of the skate of Scott Harrington to make it 1-0 Wild.  Minnesota continued to keep the ice tilted in the Columbus’ end as the 4th line won the battles for the puck to set up Matt Dumba for a shot from the point that was held onto by Kivlenieks.  The Wild would get called for interference as Joel Eriksson Ek ran over Devin Shore giving the Blue Jackets its first power play of the game.  The Blue Jackets power play tried to set up Zach Werenski but the Wild were doing what they could to challenge any attempt to dish it to the former Michigan standout.  Minnesota’s penalty killers did a good job of working sticks and bodies into shooting lanes and they were able to thwart the Blue Jackets’ power play without much drama.  The Wild’s 3rd line would have a great shift as Mats Zuccarello, Marcus Foligno and Alex Galchenyuk exhibited some promising chemistry as Galchenyuk’s shot from the high slot forced Kivlenieks to make a save.  Minnesota’s hustle had Columbus bottled up in its own zone as the Wild kept swarming around the Blue Jackets crease as they hoped to extend their 1-goal lead.  A few minutes later Gustav Nyquist flipped a puck into the Wild zone that bounced off the ice that forced Alex Stalock to try to punch it away but the rebound went right to Nick Foligno who lifted it up and over Stalock’s shoulder.  1-1 game.  It was an odd bounce but it was equally the kind of luck the Wild have had most of the season that even though they had been dominating most of the play their opponents kept hanging around.  The lucky goal lifted the spirits of the Blue Jackets who started to skate with more jump and purpose.  As a result of going against a more energetic opponent, time and space was hard to come by in the offensive zone and the Wild found itself setting for more shots from the perimeter.  The Wild kept battling and their persistence would be rewarded as Ryan Donato raced into the Columbus zone to not only beat an icing call but to send a shot on goal, and as the play kept developing it was Donato gathering up a rebound from his knees and he’d swing a backhander by Kivlenieks.  2-1 Wild.  It was a decent 1st period for the Wild, where the new lines were working fairly well so far.  Gerald Mayhew looked good on his first few shifts although he needs to be a bit greedier and take the chance to shoot the puck more often.

2nd Period Thoughts:  Ryan Suter would fire a shot from beneath the left faceoff dot that struck the side of the net and gave Kivlenieks a bit of trouble.  The Blue Jackets tried to answer back as Shore let go of a slap shot from the high slot that was an intentional pass off the boards out front to Emil Bemstrom who got off a quick shot only to be shut down by Stalock.  The Wild’s 4th line had a nice opportunity of their own as Donato worked a puck up to Ryan Hartman whose shot missed wide of the mark as he had a step on the Blue Jackets’ defense.  Harrington would trip up Greenway giving the Wild its first power play of the game.  Minnesota had an excellent chance in first 15 seconds of the man advantage as Kevin Fiala let go of a heavy wrist shot that snuck underneath Kivlenieks arm but he was able to fall backwards and cover up the puck before anyone could pounce on it.  About a minute later, it was Dumba stepping into a one-timer that rang off the post and stayed out.  Minnesota’s power play kept attacking as Galchenyuk would make a pretty dangle to get a step on Vladislav Gavrikov as he swept behind the Blue Jackets goal and tried to feed a pass back to Mayhew that just failed to connect.  Marcus Foligno would get called for slashing giving Columbus a chance on the power play.  The Blue Jackets’ would get swarming as Bemstrom had a few chances that forced Stalock to make some outstanding saves to keep the Wild’s 1-goal lead intact.  Mikko Koivu would score his first goal in what seems like a geologic age as he pounced on a loose puck to surprise Kivlenieks to make it 3-1.  His first goal since November 9th, 2019.  Minnesota kept swarming as they set up Parise for a one-timer that Kivlenieks fought off and then the puck was gathered up by Eriksson Ek who then rang a shot off the post before it was covered up by the Blue Jackets netminder.  Minnesota would get a little lucky too as Stefan Matteau got behind the Wild defense but he’d lift a shot up and well over the Wild goal.  The Wild’s 4th line would strike in the last minute of the period as Ryan Hartman sent a puck on goal that Kivlenieks couldn’t control before it was backhanded in by Koivu to make it 4-1 going into the 2nd intermission.

3rd Period Thoughts:  The Blue Jackets would cut the Wild lead to two, as Shore flipped a puck up into the air that bounced off the ice that Stalock struggled with an it was Bemstrom sweeping in the loose biscuit to make it 4-2 Wild.  Columbus continued to attack as another flipped puck bounces on the ice that Dumba tried to play but he’d fan on the clearing attempt and the puck was gathered up by Pierre-Luc Dubois and fired into the Wild goal.  4-3 Wild now as you could hear a collective anxious moan from the home crowd.  Columbus continued to threaten the Wild as every shot seemed to be an adventure as Stalock was struggling to stop.  I was a bit surprised that Wild Head Coach Dean Evason didn’t call a timeout to settle things down.  Columbus would have a great chance to tie the game as Werenski found time and space and he’d rip a wrist shot that was denied by the leg pad of Stalock.  Minnesota would answer back with a goal to push their lead back out to two as Staal found a trailing Kevin Fiala who moved just inside the right faceoff circle and he’d fire a laser by Kivlenieks.  5-3 Wild.

GOAL. Kevin Fiala (who else?) scores to restore the two-goal lead.

Minnesota would appear to lock everything down defensively through the last few minutes of the game.  The Wild were tying up Columbus forwards and even as they tried to work their way in close in search of another greasy goal, Minnesota was able to sweep away the dangerous pucks.  Yet the Blue Jackets were not done yet, as Werenski swept up a puck in the neutral zone and raced by Suter and beat Stalock off the rush.  5-4 Wild.  Minnesota tried to answer back as Mayhew blocked a shot near the Wild blueline creating a 2-on-0 but Fiala would run out of space and wasn’t able to dish it to Mayhew who was just waiting to pounce on the play and Minnesota’s golden opportunity came up empty.  The Blue Jackets would pull Kivelnieks for an extra attacker with about 1:40 left o play.  Columbus was taking any chance to send pucks on goal and hoping for a lucky ricochet, and Minnesota scrambled as Stalock denied Boone Jenner at point-blank range.  The Blue Jackets would take a timeout with 49 seconds left to talk strategy as to how they were going to get the equalizer.  The Wild would be able to get bodies and sticks into shooting lanes and Minnesota would breathe a collective sigh of relief as they would skate away with a 5-4 victory.

I noted in the last post-gamer about the Iowa Wild’s lack of success in Austin.  Luckily in the AHL, you often get two chances when you have a road trip and the Wild would make the most of it.  Both clubs were again stingy in regards to giving up scoring chances in the 1st period and the period would end at 0-0 after 1.  Iowa would strike early in the 2nd period as Luke Johnson buried a nice set up by Mason Shaw.  The Wild would add another a few minutes later as Dmitry Sokolov feinted at a shot and threaded a pass to Hunter Warner for his 1st goal of the season giving Iowa a 2-0 lead going into the 3rd period.  The Stars simply didn’t have the legs and Iowa would put a nail into Texas’ coffin as Brandon Duhaime buried a shot off the rush on the power play to make it 3-0 Wild mid-way through the 3rd.  Mike Liambas would have an empty netter to seal a 4-0 victory.  Kaapo Kahkonen earned his 6th shutout of the season on the strength of 30 saves.

F – Nikita Nesterenko (Chilliwack, BCHL) ~ the Boston College-commit continues to lead the way for the Chiefs as he had three helpers in Chilliwack’s 7-0 win over Langley.  Nesterenko has 20 goals, 53 points, 29 PIM’s in 55 games.