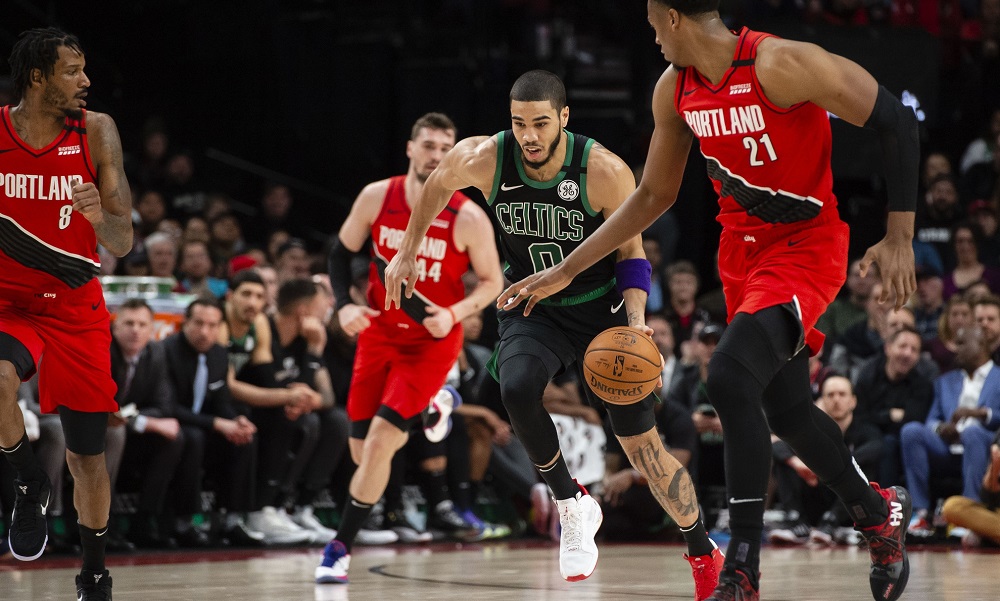 Jayson Tatum led all scorers with 36 points (26 in the second half) on 14 of 22 shooting, including a new career high in threes. Jaylen Brown add 24 points and a total of six Celtics were in double figures. CJ McCollum led the Trail Blazers with 28.

The Celtics will be missing one of their starters for the 39th time in 57 games tonight, and are somehow going for win number 40 on the season

#celtics off to slow start but they’ll weather this storm. May be time out time for brad.

(Narrator: Brad did not call timeout.)

There was an unnecessary video review, which unearthed this nugget:

And Marcus Smart nailed a trio of triples, until his heat check.

I was in the midst of tweeting "Smart heat check alert" and he launched an airball https://t.co/tpWUfqLxNo

After 12 minutes, the Celts had the lead.

Smart's got nine on three 3s, Tatum has eight and Hayward has six. No points from the bench, but that hasn't been a problem yet tonight.

In the second, Jaylen joined the 3-party. JB scored 12 in the quarter.

Jayson Tatum, Marcus Smart and Jaylen Brown are a combined 7-of-11 from deep. They have 25 of Boston's 40 points.

The Celtics, led by seven straight points from Jaylen Brown, just scored 10 of the game's last 12 points to pull ahead 43-33.

Portland drew within 3, but Boston answered with a 7-0 run

Hassan Whiteside is on Portland.

Hassan Whiteside talking shit after an easy block and then immediately giving up the easy offensive rebound to Gordon Hayward sums him up perfectly pic.twitter.com/ZYI5qoPuil

So is Carmelo Anthony.

C's are cookin from long range, where they've made 11 of their 22 attempts. Brown leads all scorers with 15 points, and he's also tied for the team high in assists with two. Boston is getting quality looks with minimal ball movement.

A few blown rotations and slip-ups to end the half on defense for Boston, but overall the intensity ratcheted up after a lackluster first 18-20 minutes of play.

The Celtics just picked up a delay-of-game warning for taking too long to start the third quarter.

Marcus with a clever dime.

Smart with the assist to Theis pic.twitter.com/oQ2bl45FVe

Blazers were hanging in until they went cold around mid-third quarter – with help from Boston’s defense.

Hayward, Brown and Tatum are a combined 21-for-38 shooting for 54 points.

Incredibly, the coach got hit with another technical.

All was well at the end of the third as Tatum scored a dozen in the period.

Tonight is the 3rd straight game that both Jayson Tatum and Jaylen Brown have 20+ points. The Celtics are 13-1 when that happens this season

Jayson Tatum has now scored 30+ points in five of his last nine games.

With 5 minutes left, the Blazers cut Boston’s lead to 11 and looked poised to make one last run, but Smart hit his fourth triple to calm the waters. McCollum proceeded to miss 3 of 5 free throws, and Tatum drained his eighth trey to end all drama with 2:56 remaining.

The Celtics defeat the Trailblazers 118-106 without Kemba Walker and are the fifth team to reach the 40-win mark this season.