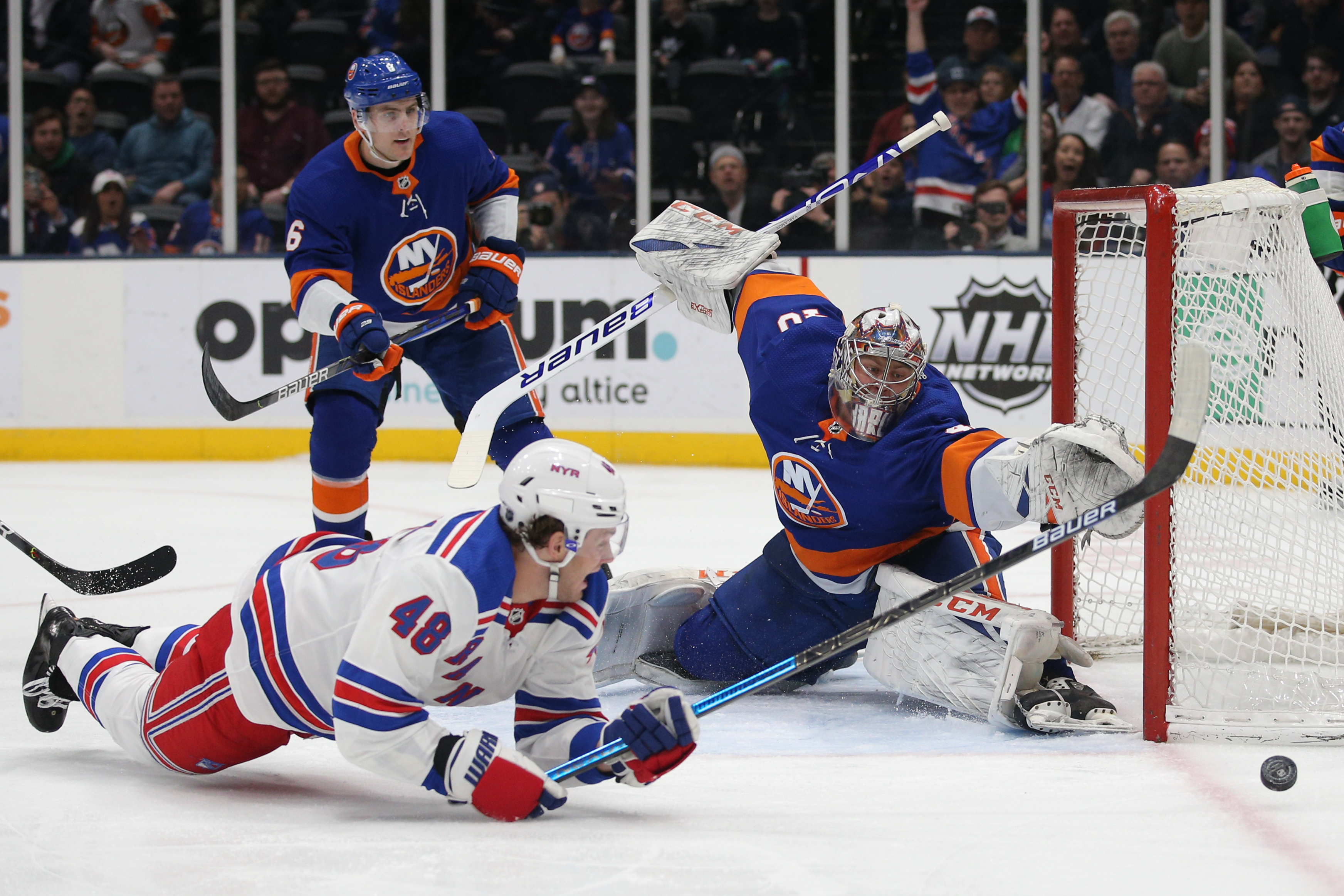 UNIONDALE, N.Y. — It lived up to the hype of an Islander-Ranger rivalry matchup, but the Islanders weren’t able to complete the comeback on Tuesday night. Mika Zibanejad scored the game-winner 28 seconds into overtime for the Rangers in a 4-3 loss for the Isles.

Jean-Gabriel Pageau, Jordan Eberle and Brock Nelson scored to rally the Islanders from a two-goal deficit and Semyon Varlamov made 24 saves. Artemi Panarin, Greg McKegg and Brett Howden also scored for the Rangers.

Below are three takeaways from the Islanders’ loss:

The Islanders had plenty of shots on net Tuesday night, but few of them were going in early on. They had 31 on net after the first 40 minutes and finished the game with 45 shots against Rangers starter Alexandar Georgiev.

However, the Islanders weren’t getting too down on how things shook out in the end.

“I think we can be proud of the way we played tonight,” Bailey said. “Obviously the end result wasn’t quite what we were hoping for, but I thought we did a lot of good things and definitely the type of game you can try and build off of. I think it was a good example of the way we need to play.”

It was a character performance

The Islanders were without defenseman Andy Greene, who went down in the first period. The Islanders lost Michael Dal Colle to a questionable hit just under six minutes into the third period and Pageau was sent off after stepping in to defend Dal Colle.

Then the Islanders looked as though they had pulled within one when Devon Toews beat Georgiev, but had the goal immediately waved off with the officials saying that Anders Lee was in the crease. The Islanders challenged the play, but the call was upheld.

All of that occurred and the Islanders still managed to score twice in the closing minutes of the third to force OT.

“On the bench you’re trying to get organized and get different guys in different roles,” Islanders coach Barry Trotz said. “All of a sudden they have an extra line and if you want any kind of a matchup or you feel like you’re at a disadvantage then it’s a little more difficult. It was just lots of communication, lots of encouragement and guys stepping up.

“We had to step up. The bench got pretty lean pretty quick and guys stayed with it. That was a real character point for us.”

"JG is as advertised. He's impactful, you see how he changes our team in so many ways. You saw how he stepped up. What a great pickup by Lou. I'm glad he's on our side." – Barry Trotz pic.twitter.com/p6Qs2N6jKl

Eberle scored right out of the penalty box in an impressive display of his skill moments after the failed challenge. Then Brock Nelson scored on a tip-in with the Islanders using an extra attacker and 17.9 left on the clock.

The point helped move the Islanders a point ahead of Columbus and stayed within two points of Philadelphia for third in the Metropolitan Division.

“No quit on us, even after we had the goal called off there,” Nelson said. “We stuck with it and got a big point.”

The rivalry lived up to the hype

Trotz walked into the post-game press conference and before the first question could be asked he said, “Hell of a hockey game, eh.”

An accurate summation of the 60:28 worth of hockey that was played on the ice at Nassau Coliseum. The Islanders and Rangers played a playoff-like contest to the delight of the sellout crowd, which watched the final regular-season matchup between the rivals.

"The organization, the team, all the players, really made me feel comfortable. Really made me feel like I was part of the family. Just to add to that, the fans did the same thing tonight, I feel very lucky to be here." – JG Pageau pic.twitter.com/bqCqPhRf9n

The Islanders played a strong performance in the first, but the Rangers punched back and scored first. The drama of the late-game comeback and the questionable hit on Dal Colle added to the tension in the building.

Even Pageau was impressed by his first “Battle of New York.”