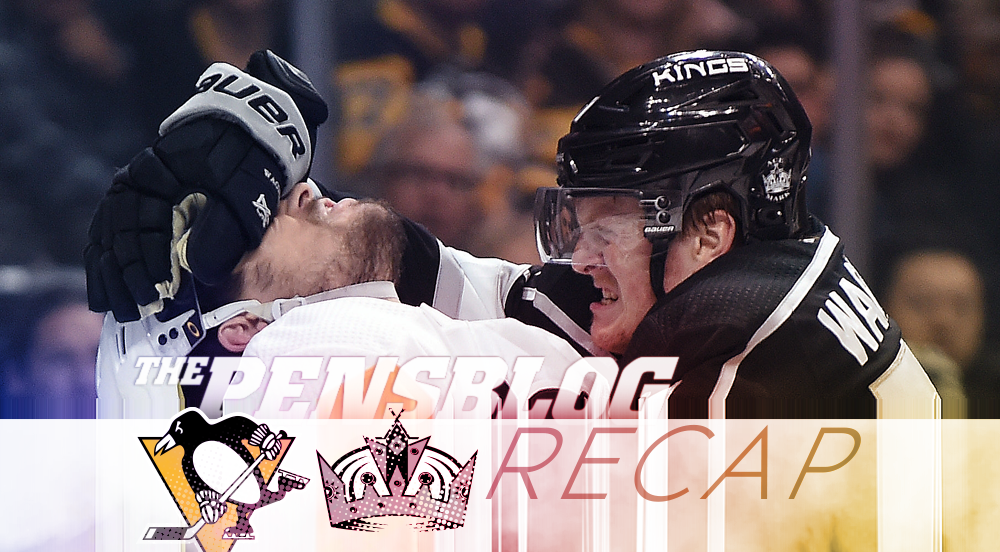 Welcome to the first Rezcap of 2020 blessing you up from the best coast.

The Pens ride out west having lost 3 straight, but reinforcements are on the way. They now sit 4 points back of the Caps with 2 games in hand.

This road trip will see the Pens hit LA, Anaheim, and San Jose. Three not good hockey teams. Anything less than 4 points is bad news.

The Kings are 2-3 in their last 5 including an outdoor game. Toffolli’s gone, but their top D-pair is still legit.

Would be a good night to find some depth scoring.

#Pens coach Sullivan said McCann will not play tonight. He is continuing to be evaluated for an upper-body injury. -MC

Welcome to the Penguins lineup, Patrick Marleau and Evan Rodrigues!

Jarry in the cage, saddle up.

After a couple of awkward icings Brown draws a penalty from Letang. Kind of a cheesy call but whatever. Kings never leave the zone and some guy deflects a point shot home.

The LA Kings power play strikes early as Blake Lizotte deflects a blast from the point into the Penguins net 😎#GoKingsGo pic.twitter.com/9WfgnK5Z1S

Pens look asleep until Dom creates a turnover at the blue line and draws a penalty.

Galchenyuk hasn’t looked this good in a few weeks.

Couple okay chances, but killed off.

Looking at the Kings lineup.

Pens keep sleepwalking until the Marleau-Blueger-Tanev line gets some zone time. Patty makes a couple nice passes that lead to chances. Dude is also way bigger than I remember. Pens picking it up a bit just over ten minutes in.

Peterson loses his goalie stick for like 2 minutes like a total pantload. Speaking of pantloads Jack Johnson to the box for holding.

Killed. Best chance is a partial 2on1 for Blueger and Tanev that doesn’t get on net.

Crosby should have had a goal deflect in off his skate, but somehow it walks the goal line and stays out. One of the referees emphatically says its in and costs the Pens a chance at the rebound. 87 is pissed.

Pens pick it up at the end of the period after a slow start. Horn sounds.

I would rather be forced to inhale an entire bottle of that shitty vodka than watch that commercial again.

Someone hit a post but I don’t know who because some rugby asshole is yelling at me and I’m disoriented. They’re trying to explain the similarities between the two which seem like not a lot because hockey is played on literal ice.

I did enjoy when they showed the Team USA rugby team and the dude reacted like I would if they let me introduce my friends on live TV. OH THAT THERE IS TIMMY A REAL WEEKEND WARRIOR DAYT ONE YOU MAY NOT REALIZE IT BUT HES HIGH AS SHIT RIGHT NOW.

Interference on the Kings finally. Pens to the PP.

The rugby guy didn’t say anything for like 3 minutes but he’s still there.

Kings clutching and grabbing anything they can. Malkin tripped entering the zone. No call. Killed.

Kings really hanging back and packing things in. They’ve got 3 sagging back every time the Pens enter the zone. Dom with a good chance. Pens controlling play.

Some guy jumps on Jarry and Marleau gets tripped in the chaos. 3on1 the other way for the Pens that ended in a slapper from the blueline

Trevor Lewis makes a nifty move and buries his own rebound to give the LA Kings a 2-0 lead 🙌#GoKingsGo pic.twitter.com/Awty7xqeGa

Looking forward to the 3 articles on HOCKEY NOW! in the coming days about jj3’s importance to the locker room or something. I miss the rugby guy.

To avoid the creeping depression this game is bringing on I went and got some of the fancy cheeses and crackers my wife keeps around and I gotta admit it’s kinda working.

Pens still have the puck. Pens still can’t score. About 7 minutes goes like this until Tanev and Wagner get tied up for a bit. Frustrated people are frustrated.

Hard to really pass any judgement on anyone except Johnson right now. New guys look good, chances are there, puck just doesn’t want to go in. As someone who bets, and loses, a lot of money on hockey, this is how it goes sometimes.

Hornqvist takes it off Doughty and bulldogs it to Geno, to Rust, 2-1 game all of a sudden…..

Rust gets his 24th of the season with assists from Malkin and Hornqvist. pic.twitter.com/afj1Qom3Fc

More up and down now but fewer shot attempts. Neutral zone clogged tighter than a golden corral toilet.

Malkin almost does the thing getting some space through the middle and getting a good shot off but it’s stopped. 6 minutes to go.

Jarry finally gets out of the net with 1:10 to go. Pens create a couple mad scrambles that don’t cash in.