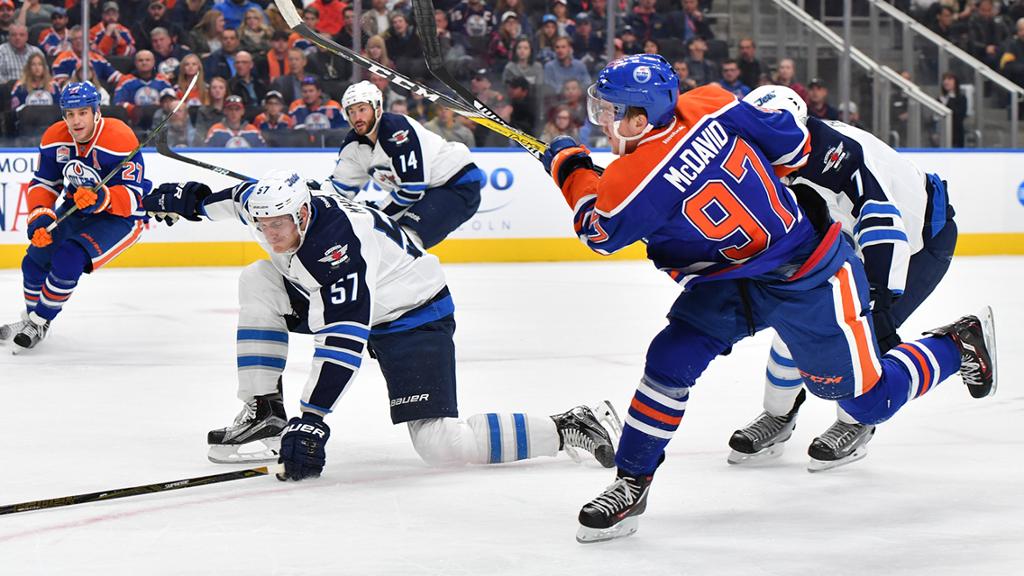 The Edmonton Oilers return home to Rogers Place for a single game against the Winnipeg Jets. It just so happens to be a massive game with major playoff implications late in the season. It is the second of three meetings this season between the sides and the first at Rogers Place.

The Oilers were blanked 3-0 on Wednesday night in Vegas, and have gone 1-2-1 in their last four games. The Jets, meanwhile, are coming off of a 3-0 victory over the Capitals on Thursday night. Winnipeg won the first meeting 1-0 in a shootout back in October.

Mike Smith gets the start for the Oilers, while Connor Hellebuyck gets the go for the Jets.

Edmonton: Play a full 60. The Oilers played a great final 40 minutes in Anaheim and a great first 20 minutes in Vegas. They got just one point in those two games as a result. Edmonton has shown a capability of playing a strong 60 minutes, but hasn’t done it in a few games. They’ll need to tonight against a Jets team they are fighting with for a playoff spot.

Winnipeg: Pressure Edmonton’s puck carriers. The Oilers have not been able to transition the puck over the last two games. A big reason why? Both the Ducks and Golden Knights played an extremely aggressive style. Winnipeg doesn’t have the defensive horses that the Golden Knights do, but they have the blueprint to beat this Oilers team.

Edmonton: Zack Kassian makes his return after serving a seven game suspension for kicking Tampa Bay’s Erik Cernak. Kassian will start on the third line and is expected to bring his typical physical style and five-on-five offense. This is the kind of game Kassian should thrive in.

Winnipeg: The Jets acquired D Dylan DeMelo in the lead up to the trade deadline for a third-round pick in an attempt to solidify their defense. DeMelo will skate on the second pairing tonight, and should provide the Jets with a strong puck moving presence.

Edmonton’s lines tonight are in flux. Kris Russell (concussion) is a game-time decision, while Kailer Yamamoto (ankle) is close but will not play. Kassian returns, while Patrick Russell comes out. William Lagesson will sit defensively is Russell can go. James Neal (ankle), Oscar Klefbom (shoulder) and Joakim Nygard (hand) are all on IR and will not play.

The Jets, like the Oilers, are banged up right now. Sami Niku (lower-body) and Josh Morrissey (upper-body) are both day-to-day but not likely to play tonight. Adam Lowry (upper-body) is week-to-week, while Bryan Little (ear) is done for the season. Patrik Laine will also miss tonight’s game.

The Oilers badly need two points tonight. They are just two points up on both the Jets and Nashville Predators for the final playoff spot in the Western Conference. They sit a single point ahead of the Calgary Flames for the 3rd spot in the Pacific Division. A win tonight would push the Oilers into second in the Pacific.

Ryan Nugent-Hopkins has been terrific in his last 20 games. He has 16 points and has been a force with Draisaitl and Yamamoto. That line hoped to get reunited tonight for the first time since Sunday in LA. They’ll have to wait for Monday night in Nashville.

The Oilers are a pedestrian 6-7-2 against the Central Division this season, but were swept by the Minnesota Wild. Against teams other than the Wild? They are 6-4-2. The Jets are 10-5-0 against the Pacific this season.