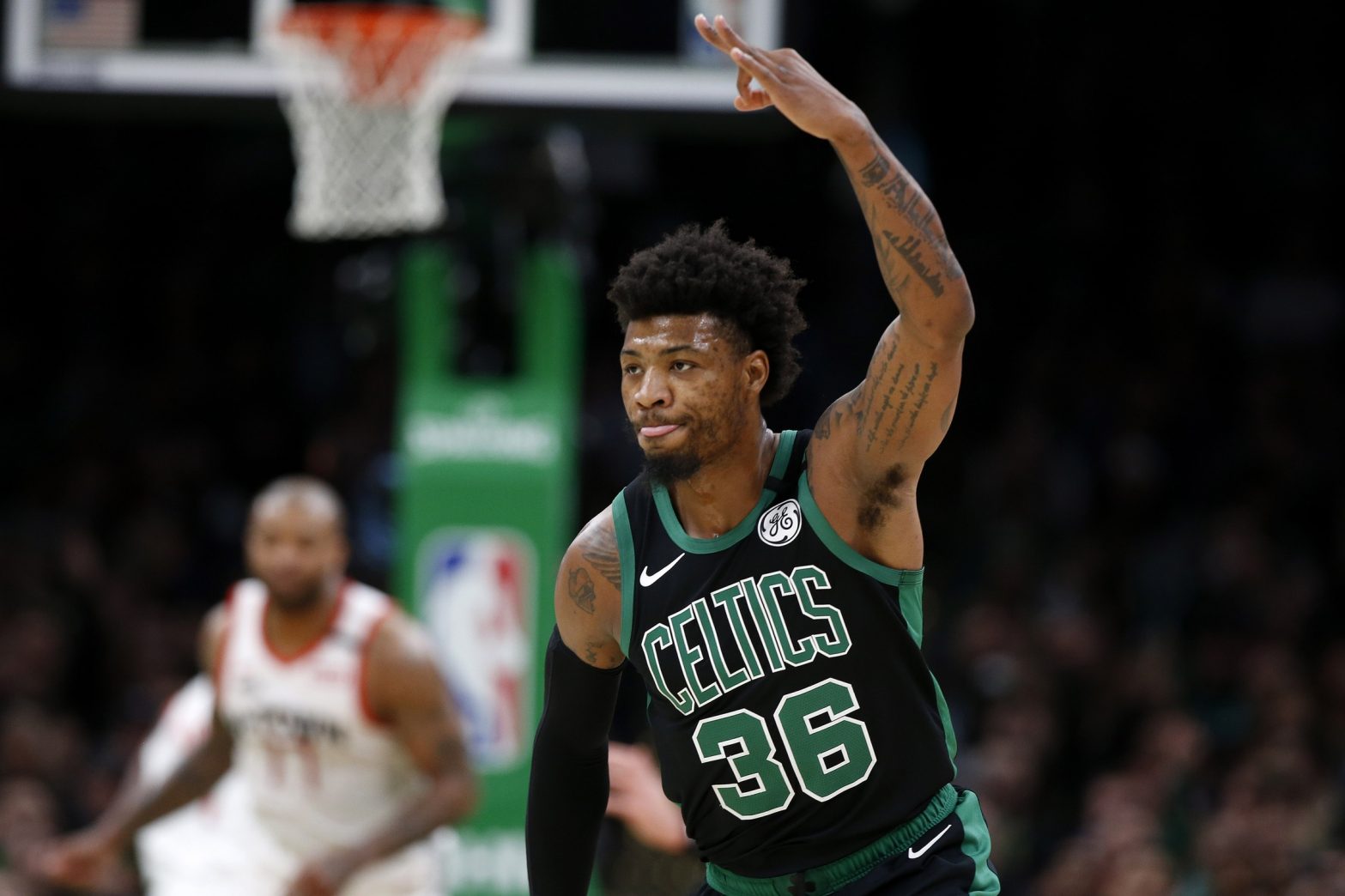 That was a weird one. In the first half, the Celtics had outstanding offense, strong defense and handled the ball well while the Rockets did all of those things horribly; the second half was the opposite. A thrilling go-for-broke push in the final minutes brought the game to a tie that forced overtime, but after getting to overtime, didn’t seem prepared for the moment and ended up losing by the tiniest margin, 111-110.

Jayson Tatum and Marcus Smart were the night’s biggest Boston contributors, with respective lines of 32-13-5-2-2 and 26-5-7-4. Two other Celtics made double figures (Jaylen Brown scored 22 points, Gordon Hayward racked up 18), but at poor percentages, and no other Boston players contributed significantly to offense. On Houston’s side, Russell Westbrook continued his run of dominant, newly efficient play with a 41-8-5-3 line on 60% shooting.

Tatum did not start the night well offensively, but on the other end he was an absolute monster.

Not that the Rockets were doing themselves any favors in terms of their responses to the Celtics’ defense:

Even with Tatum’s missed shots, Boston’s offense was efficient and well-rounded between the five starters, with Marcus Smart showing the most oomph on that end. Meanwhile, Houston’s belonged almost entirely to Harden and Westbrook and kept being interrupted by turnovers.

Tatum’s offense heated up in Q2, surprising no one:

And now we have Jayson getting downhill, Grant seal to allow the length extension finish quick up on glass with his inside hand pic.twitter.com/aTSgSkNNiz

Jaylen Brown and Gordon Hayward contributed notably to the scoring column as well. But it was really strong defense that got the Celtics as far ahead on the Rockets as 16 points in the first half of Q2.

James Harden takes Jaylen Brown to the basket but gets called for the foul. Refs are not buying Harden's game so far tonight. #Celtics #Rockets #NBA #NBATwitter #HOUvsBOS #NBAonABC pic.twitter.com/rna7qA3PD2

H-Town’s stars made enough hay to trim the margin of loss to single digits, but then a bunch of poor decisions on their part got Boston back up ahead by more than 10:

Russell Westbrook gets called for a flagrant one for getting under Marcus Smart's feet when he landed on a corner 3 — meaning the Celtics get three FTs (all of which he made) and then Gordon Hayward hit a 3 to make it a 6-point possession.

Celtics guards killed Harden’s momentum heading into the halftime buzzer, and Daniel Theis clocked him pretty good on a block (a clean one; the refs didn’t even consider whistling on it):

James Harden stayed down for awhile after the final play of the first half. Looked like he got up holding his left hand, but hard to tell for sure. Either way, Boston leads 56-45 at the break. Marcus Smart has 16 and 5 assists, while Russell Westbrook has 20 for Houston.

The Rockets have too high-caliber an offense—led as it is by two of the three most recent league MVPs—to get totally bogged down. So Westbrook going on a tear and bringing Houston to their first lead of the game during Q3 was not much of a surprise.

The Rockets finally making a bunch of threes and ratcheting up the physical intensity of their game plan made things even worse. While the Cs staunched the bleeding, Q3 was ultimately bad enough that they were behind: 81-78 Rockets.

Tatum has been unreal lately, but he's the only scorer Boston has out there right now. Lots of pressure on him to create offense for the Celtics.

Lest you forget that this team really will be better when Kemba Walker is active again. Houston’s lead wasn’t large throughout the first two-thirds of Q4, but the slog that Boston’s offense had become—in stark contrast to the crisp motion of the first half—was a real problem.

Flagrant foul for Tatum on what I thought was a pretty normal fade-away shooting motion.

And then there was a whole lot of jackassery from the men in the zebra shirts.

Ridiculous call on Tatum. NBA officials are a joke.

That being said, the degree to which the Cs were playing like a completely different team than what we saw in the first half couldn’t be overstated:

It’s been years since I have seen the Celtics play this wild, this looks like them back in the pre Horford days

At the two-minute warning, the Rockets had a six-point lead. Then things got wild:

Marcus cuts it to 1️⃣! pic.twitter.com/6MYoSC47N0

Then, when Jayson Tatum was able to get to the line and missed his first free throw, he had to tactically miss the second, did so, the ball bounced around a bit, and then:

JAYLEN SENDS IT TO OT!!! pic.twitter.com/E5SMOss32I

Better late than never, the Celtics of the first half came back…

…except that they expounded all their effort to make that tie happen in regulation, and then there was little left for the rest of the game.

That was a bizarre final possession. The Celtics had a timeout and were trailing by one, and for some reason neither called a timeout nor acted with any sense of urgency at all. The result? An ugly Jaylen Brown turnaround jumper is missed, and Houston wins 111-110. What a game.