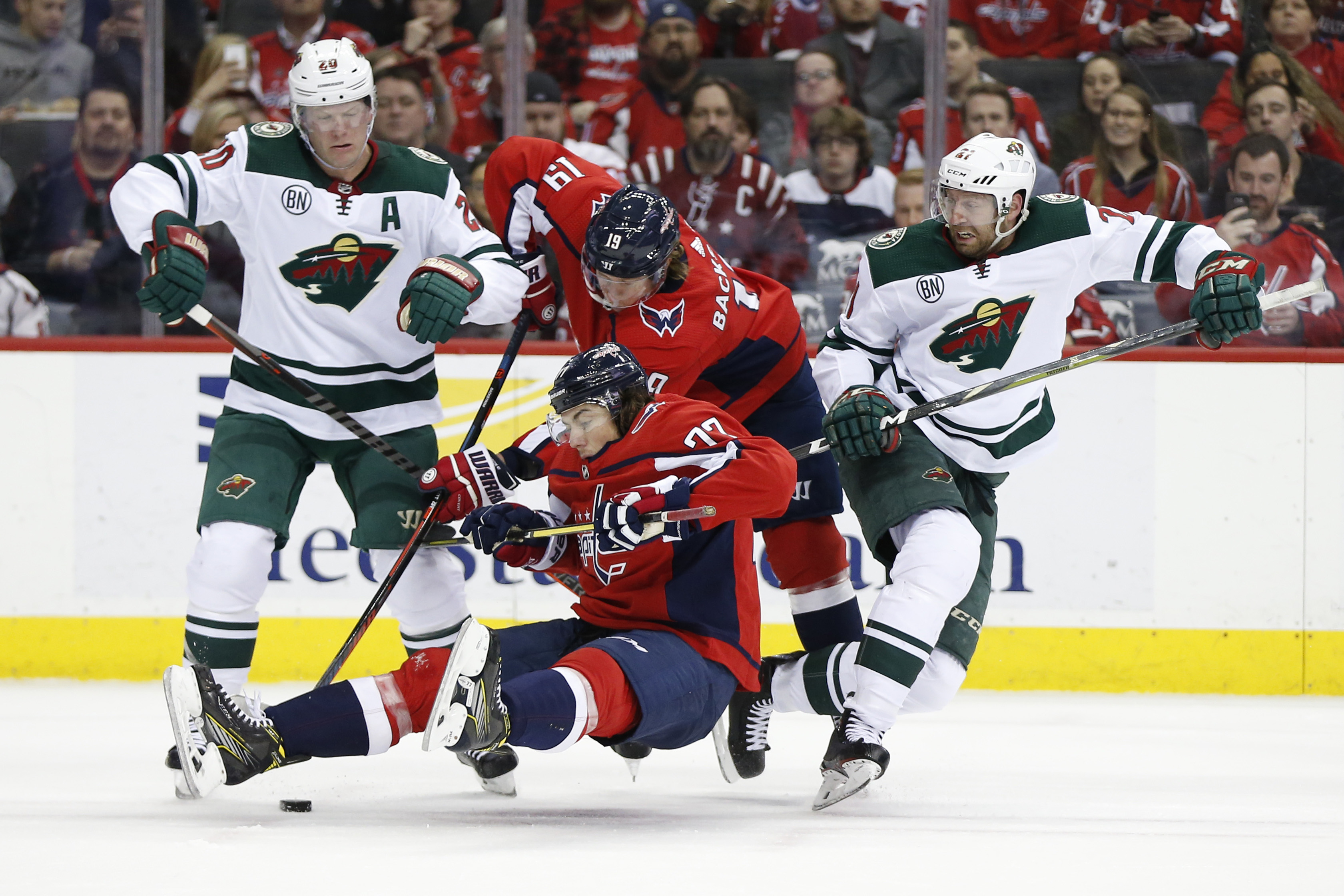 The 17 goals the Minnesota Wild have scored in its last 3 games are a record in franchise history, but one could hardly notice they were playing two teams that were about as ice cold and or decimated by injuries.  So was it really just awesome play or were playing a pretty suspect opponent?  With the Washington Capitals coming to St. Paul the Wild will find out just how good they have been playing.

Yet despite the Wild’s strong play, they’ve barely moved up in the standings as key opponents Arizona, Nashville and Winnipeg have a 1-point lead.  The Capitals are battling to stay atop the Metropolitan division.  Can the Wild finally claw their way into a wildcard spot with a win over Washington?

1st Period Thoughts:  Minnesota’s top line did a nice job of possessing the puck and trying to cycle the puck to free up a shooting lane as Kevin Fiala ripped a wrist shot on goal that was held onto by Braden Holtby.  Tom Wilson was looking to terrorize the Wild with a big hit on Joel Eriksson Ek.  Both teams were finishing their checks as Alex Ovechkin knocked down Matt Dumba with an open ice hit while Marcus Foligno ran over Nick Jensen.  Minnesota would spring Ryan Donato for a breakaway and he’d make a few shoulder fakes going from forehand to backhand that was stopped by Holtby’s A-frame save, but he stayed with the play and tucked it inside the left post and in.  1-0 Wild.  The Capitals would have a great chance to even the score as Evgeni Kuznetsov, Alexander Ovechkin but it was Jonas Siegenthaler carrying the puck into the Wild zone and instead of feeding it to one of the Russians he waited too long and Minnesota’s backcheck would thwart the opportunity.  The Capitals would draw the first power play of the game as Greg Pateryn got caught tripping up Lars Eller.  About 45 seconds into the Capitals’ power play, the Wild would make it a 5-on-3 as T.J. Oshie skated into the stick of Alex Stalock.  The Capitals had 1:18 of 5-on-3 time.  Eriksson Ek would win the initial draw and the Wild would clear the zone.  Minnesota tried its best to stay in a tight triangle, but the Capitals puck movement was terrific as Nicklas Backstrom threaded a cross-ice pass that was denied by a fine post-to-post save by Stalock.  The Capitals stayed patient and they set up Ovechkin for a one-timer from just above the right faceoff circle that Stalock managed to get some of his glove on and hit the cross bar and in.  1-1 game and the Capitals still had 50 seconds of power play time left.  The Wild were aggressive on the rest of the penalty kill and the Wild would escape unscathed.  However, the Capitals are dangerous at even strength and Minnesota got caught with 3 players just standing and not watching where their opponents are and Richard Panik would sweep up a loose puck and he’d rifle a shot by Stalock off the rush.  2-1 Capitals.  Washington could sense a momentum shift and they’d light the lamp just 31 seconds later as they’d skate in a 3-on-1 and this time they’d feed the puck over to Ovechkin who hammered a one-timer by Stalock who had no chance.  3-1 Capitals.  The Capitals would take a slashing penalty as Backstrom headed to the box for a pretty light tap to Kevin Fiala’s stick.  Minnesota struggled to get set up in the offensive zone and spent the 1st minute just trying to get comfortable.  Yet once they did, the Wild would light the lamp as Jared Spurgeon would feed a one-timer for Fiala who blazed a headhunting shot by Holtby cutting the Capitals’ lead back to one, 3-2.  Tempers would boil over after Stalock covered up a puck, as Alexander Kovalchuk threw a punch towards Ryan Hartman.  Eventually Hartman would drop the gloves with Brendan Dillon and the Wild winger who was giving up at least 5 inches to the taller Capitals’ defenseman.  Hartman would move laterally to keep Dillon off balance as he threw left hand jabs, often ducking underneath haymakers being thrown by Dillon and a few of Hartman’s jabs were landing to good effect.  The smaller Wild winger was holding his own by being quick, landing punches and avoiding any big punches Dillon was throwing.  A clear win for Hartman.  Kovalchuk would get a double-minor for roughing while Hartman and Dillon got 5-minutes for fighting.  Hartman would get an extra two minutes for slashing which meant the Wild ended up only with a 2-minute power play when it was all said and done.  Minnesota didn’t do much with the minute it had on the power play, but the tempers were still hot as there was another small scrum after a late save by Holtby.  The Capitals would hold onto their 1-goal lead going into the 1st intermission.

2nd Period Thoughts:  The Wild had about a minute of power play time left to start the period.  Minnesota did absolutely nothing with shortened power play as the Capitals’ puck pressure never allowed the Wild to get set up in the offensive zone.  The Capitals were content to work pucks deep into the Wild zone and let Minnesota waste time and energy chasing the puck around the ice.  Washington would get Minnesota chasing in its own zone which opened up a chance for Ovechkin but his wrist was absorbed by Stalock who had left his crease to challenge the shot.  The physical play continued as Kovalchuk would run over Stalock to no call who tried to sell it by flopping a bit.  Marcus Foligno would level Dillon with a big hit that drew the cheers from the home crowd.  The Capitals nearly would cash in as Pateryn got walked and Washington had a point-blank range chance that was swept away at the last moment by Foligno.  Minnesota would send a sharp angle shot that Holtby gloved as Greenway was patrolling near the Capitals’ crease and a scrum would unfold moments later.  Suter and Greenway would head to the sin bin for the Wild and Panik and Garnet Hathaway would go to the box for the Capitals.  A few minutes later the Wild would flirt with a quality scoring chance as Foligno dropped a pass back to Alex Galchenyuk that he fired high over the Capitals’ goal.  Minnesota would draw a penalty as John Carlson tripped up Spurgeon.  The Wild didn’t do much on the first half of the man advantage as bad passes and predictable puck movement made it easy for the Capitals to deny passing and shooting lanes.  Minnesota finally had a decent chance after Gerald Mayhew won a battle for the puck along wall and working it out to the point where Dumba blasted a slap shot that was blocked by Holtby and the Wild again came up empty on the power play.  The pace of the game slowed down considerably from where it was in the 1st period as both teams were wary of giving up scoring chances off the rush and time and space in the offensive zone was tough to find and Minnesota would still trail by one going into the 2nd intermission.  Wild trailing 3-2.

3rd Period Thoughts:  The Capitals seemed determined to want to put this game away as off the opening draw they raced in a 2-on-1 where Jakub Vrana fired a shot high over the goal.  Washington would force a turnover in the Wild zone where Wilson gathered up a puck and fired a shot that snuck underneath the arm of Stalock and in.  4-2 Capitals.  Minnesota would try to answer back as they crashed the net as Greenway was denied at close range by Holtby.  The Wild were battling hard and stepping up as they searched for some kind of opening to exploit offensively.  The aggressiveness of the Wild was leaving them vulnerable to a counter attack and Oshie made Pateryn look foolish on a toe-drag move but his backhander was dismissed by the leg pad of Stalock.  The Capitals seemed to want to add to its lead and the Wild were scrambling back to defend.  Minnesota was spending time defending instead of going on the attack and time was starting to become an issue considering they were down by two.  Fiala would draw a tripping penalty on Michal Kempny which gave Minnesota its best chance to cut into the Capitals’ lead.  On the man advantage it was Fiala dangling around a Capitals’ penalty killer and then firing a shot on goal that Holtby stopped but Zach Parise would pounce on the rebound to bury it to cut Washington’s lead to one, 4-3.  The Wild would pull Stalock with about a minute left, but they’d all hang out on the perimeter making things pretty easy for Washington in the closing minute.  Minnesota would call a timeout to talk strategy with 19.7 seconds left but they wouldn’t be able to generate a quality scoring chance and they’d fall 4-3 to Washington.

No Mayhew, No Gabriel Dumont, No Hunter Warner, no problem.  The Iowa Wild would travel to Stockton to take on the Heat.  After a physical and punishing 1st period, neither team could break the stalemate as both Kaapo Kahkonen and Stockton’s Artyom Zagidulin were rock solid.  The 2nd period would mostly go the same way as open ice was hard to come by and Kahkonen and Zagidulin continued to put on a clinic.  Iowa would finally break the tie as Cody McLeod fed a pass to Mike Liambas who redirected it on goal that Zagidulin had no chance on.  1-0 Iowa.  The Wild would add another just 17 seconds later as Keaton Thompson worked a puck up to Connor Dewar who then threaded a shot through a maze of sticks and legs to beat Zagidulin.  2-0 Wild.  In the 3rd period, Iowa’s defense went into lockdown mode and Kahkonen did the rest as the Wild earned its 15th road win of the season.  Kahkonen had 35 saves in his 7th shutout of the season.

RW – Matt Boldy (Boston College, H-East) ~ the skilled winger continues to find his way onto the scoresheet for the Eagles as he had an assist in Boston College’s 4-1 win over arch-rival Boston University on Saturday.  Boldy has 9 goals, 25 points, 8 PIM’s and is a +16 in 32 games.

F – Nikita Nesterenko (Chilliwack, BCHL) ~ the Boston College-commit continues to chip in points for the Chiefs as he had an assist in Chilliwack’s 2-0 win over Surrey to gain a 1-0 series lead.  Nesterenko has an assist in 1 playoff game.