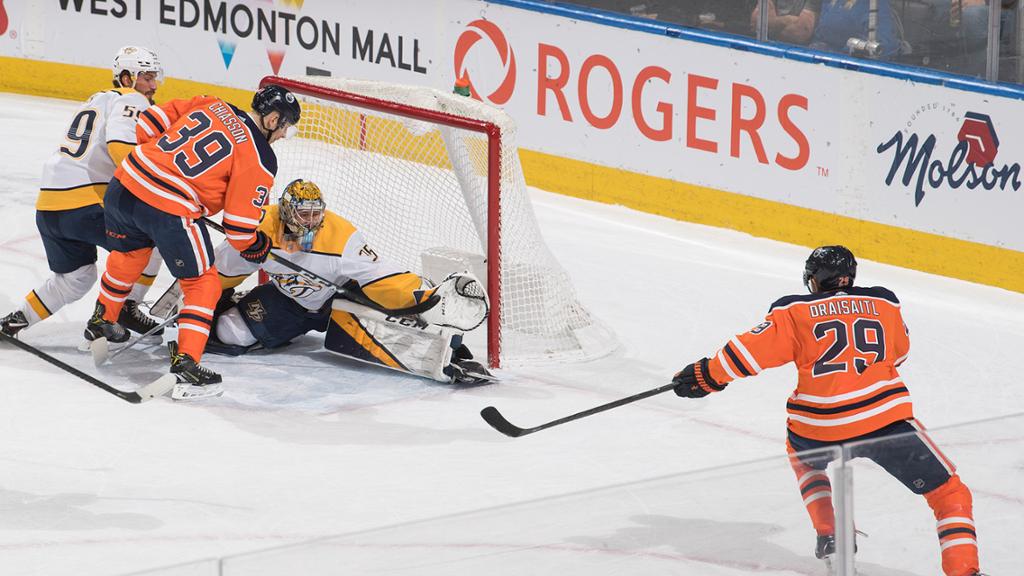 The Edmonton Oilers are getting healthier. They hope that leads to winning more hockey games. Tonight, the Oilers open yet another three game road trip that will take place over four nights. This one starts in Nashville, where the Oilers stop for the first and only time this season.

This is the third and final meeting between the teams. Edmonton is coming off of a major 3-2 victory over Winnipeg on Saturday night, while the Preds fell 3-2 to the Avalanche at home. Edmonton has won each of the first two meetings, including a 3-2 decision at Rogers Place last month.

Mike Smith gets the start for the Oilers, while Pekka Rinne gets the go for the Predators.

Edmonton: A more consistent five-on-five attack is a must for the Oilers. They were largely outplayed at even strength on Saturday, but got the win on the strength of an elite powerplay and a strong night from Smith. That’s not a consistent recipe for winning. The Oilers will need to be better at even strength against a Nashville team that does its most damage in that game state.

Nashville: Stay out of the penalty box. On the face of it, this is a really stupid and obvious key to the game. That said, the Oilers went two-for-four in each of the first two meetings and are 50% on the powerplay against the Predators. Nashville has struggled mightily to kill off penalties in this matchup. Simply do not put yourself in that spot.

Edmonton: Kailer Yamamoto is back. After being a late scratch on Saturday, Yamamoto will return after missing three games with an ankle issue. He slots right back in on the second line. His ability to win battles, get loose pucks and make plays has made him a key contributor to this team. The Oilers need every weapon they can get. The DRY line is back together and that should be great news.

Nashville: What is going on with Ryan Johansen? The former top line center is currently on the third line in Nashville and is not having a good season. Acquired for Seth Jones, the Predators simply need more out of their star pivot. It will be interesting to see how he plays in this playoff-level matchup.

Oscar Klefbom (shoulder) and James Neal (ankle) are both on IR and will not play tonight, but both are on the road trip and could return this week. Joakim Nygard (hand) remains on IR and is not close at this time. William Lagesson and Patrick Russell are the scratches.

The Predators are the rare team that is actually quite healthy at this point in the season. Rem Pitlick, Frederick Gaudreau and Korbinian Holzer are the expected scratches for John Hynes, who was hired earlier this season.

Once a nightmare matchup, the Oilers have actually fared quite well against the Predators as of late. In addition to winning each of the first two meetings this season, Edmonton has points in four straight against the Predators. They are 3-0-1 in that stretch, 1-0-1 in Nashville.

Not a bad 48 hours for Leon Draisaitl. The German star became the first player in the NHL to hit 100 points when he collected three (2-1-3) against the Jets on Saturday. He was also named the NHL’s 1st Star of the Month for February. Draisaitl collected 23 points (10-13-23) in 14 games for the club.

The Oilers are all alone in second place in the Pacific Division. They hold a one point edge on the Calgary Flames with two games in hand. Needless to say, a win tonight would be huge. The Oilers have a six point cushion on the Jets, Coyotes and Predators. Nashville holds the second Wild Card spot while Arizona and Winnipeg are the first two on the outside.