What can the Penguins expect from Nick Bjugstad's return? 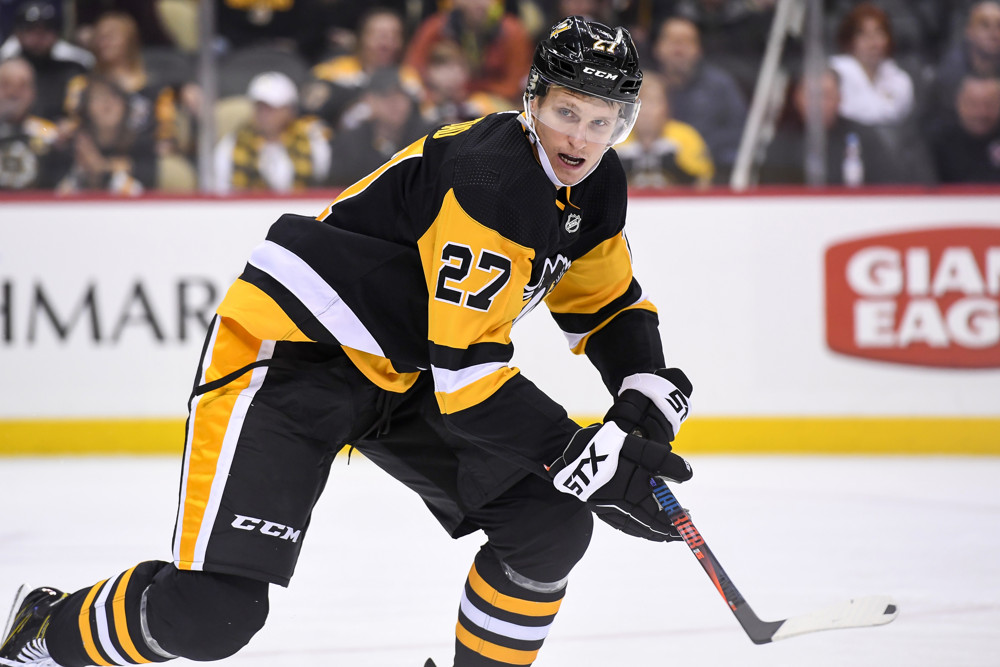 What can the Penguins expect from Nick Bjugstad's return?

The Pittsburgh Penguins are close to getting back some key players from injury amid their current six-game losing streak that has seen them go from first place in the Metropolitan division to just two points ahead of the New York Islanders and Columbus Blue Jackets who hold the two wild card spots in the Eastern conference.

Penguins head coach Mike Sullivan announced Monday that defensemen Brian Dumoulin and John Marino will be game-time decisions on Tuesday night as the Penguins return home to host the Ottawa Senators. Dumoulin has been out since December 1 when he had surgery to repair lacerated tendons in his left ankle. Marino hasn’t played since February 6 after taking a Steven Stamkos slap shot to the face.

The return of Dumoulin and Marino will allow the Penguins to move two of their anchors on the blue line, Jack Johnson and Justin Schultz, down to the third pairing. Both Johnson and Schultz have been playing top-four minutes for quite some time now and, quite frankly, have no business doing so.

Sullivan also told reporters that injured forward Nick Bjugstad will not play Tuesday, but all indications are that he will be back in the lineup sooner than later. He hasn’t played since November 15 after having core muscle surgery.

While the return of those two will have a more valuable impact, I find Bjugstad’s imminent return to be more intriguing. He has played in only 10 games this season so it will be tough to predict how he will perform when he returns. If he comes back and plays well, the Penguins are going to have the luxury of comfortably rolling four lines every night.

Bjugstad has never been a big point-getter despite having a laser-beam of a shot and average playmaking ability. His best season production-wise came during the 2017-2018 campaign in which he scored 19 goals and added 30 assists for 49 points. His 2.28 points per hour that season is far-and-away the best rate of his career. The following visualization from HockeyViz shows Bjugstad’s primary points per hour over the course of his career as well as his time on ice.

Unless the Penguins want to try Bjugstad on Sidney Crosby‘s right wing (I wouldn’t) when he returns, Bjugstad will more than likely find himself in a bottom-six role where driving play becomes more important than putting up huge point totals.

Last season Bjugstad’s most common Penguins linemates were Dominik Simon and Patric Hornqvist. The Penguins are not going to score a ton of goals with these three on the ice. Simon and Hornqvist are notorious for not finishing on grade-A scoring chances and although Bjugstad has a laser-beam shot, his 6′ 6″ stature makes it tough for him to get clean shots off in high-danger areas of the ice. There’s no problem with that though, as these three were absolute possession monsters in their time together last season.

These three were an absolute handful for the opposition last season despite a shooting percentage of just 5.21%. The Penguins already have one bottom-six line that controls play in a significant way with the Brandon Tanev-Teddy Blueger-Zach Aston-Reese line (53.89% expected goal share, 56% scoring chances for). Having another bottom-six line that drives play is going to put the Penguins in a great position for success.

Defense in hockey is tough to analyze (unless you’re really good or really bad at it) and I am increasingly of the opinion that your linemates are the most important factor of it. Thanks to HockeyViz, we are able to look at a player’s isolated impact. It is not a perfect model, but it does give us a good idea of the impact a player has after accounting for quality of linemates, quality of competition and coaching.

In the following viz you’ll see that Bjugstad has had strong defensive impacts for the majority of his career. The percentages you see are referred to as threat. Threat tells you a player or team’s offensive or defensive impact based on the quantity and quality of shots for and against. Defensively, the lower the threat, the better.

Outside of his rookie season and 2016-2017 campaign, Bjugstad has been a solid defensive player. Earlier in the season Penguins forwards proved that they are very good defensively (when they want to be). Adding another player to that group who is responsible in his own end while also creating quality offensive looks is going to bode well for them.

Another statistic we have to evaluate defense is goals above replacement or GAR. GAR attempts to measure a player’s impacts relative to a replacement-level skater. The following viz from @JFreshHockey (creator of analytics-based player cards) shows that Bjugstad’s even strength defense GAR has been trending upward for the past three seasons as he currently sits slightly above the 75th percentile of the NHL. However, you’ll also notice that he has been below the 50th percentile for the majority of his career. GAR does not isolate players in the same way that HockeyViz‘s threat does, so this is something to keep in mind.

Bjugstad is under contract with the Penguins for one more season at a cap hit of $4.1 million. That’s a hefty price tag for a bottom-six player who doesn’t score a lot, but his play driving impacts certainly soften the blow.

We can see that Bjugstad has been paid out significantly more than the WAR model believes he should have over the course of his career. This isn’t to suggest that the entire fan base turns on him and starts angrily tweeting about how awful his contract is, but rather to show that over the past two seasons Bjugstad has been right around 0.0 WAR.