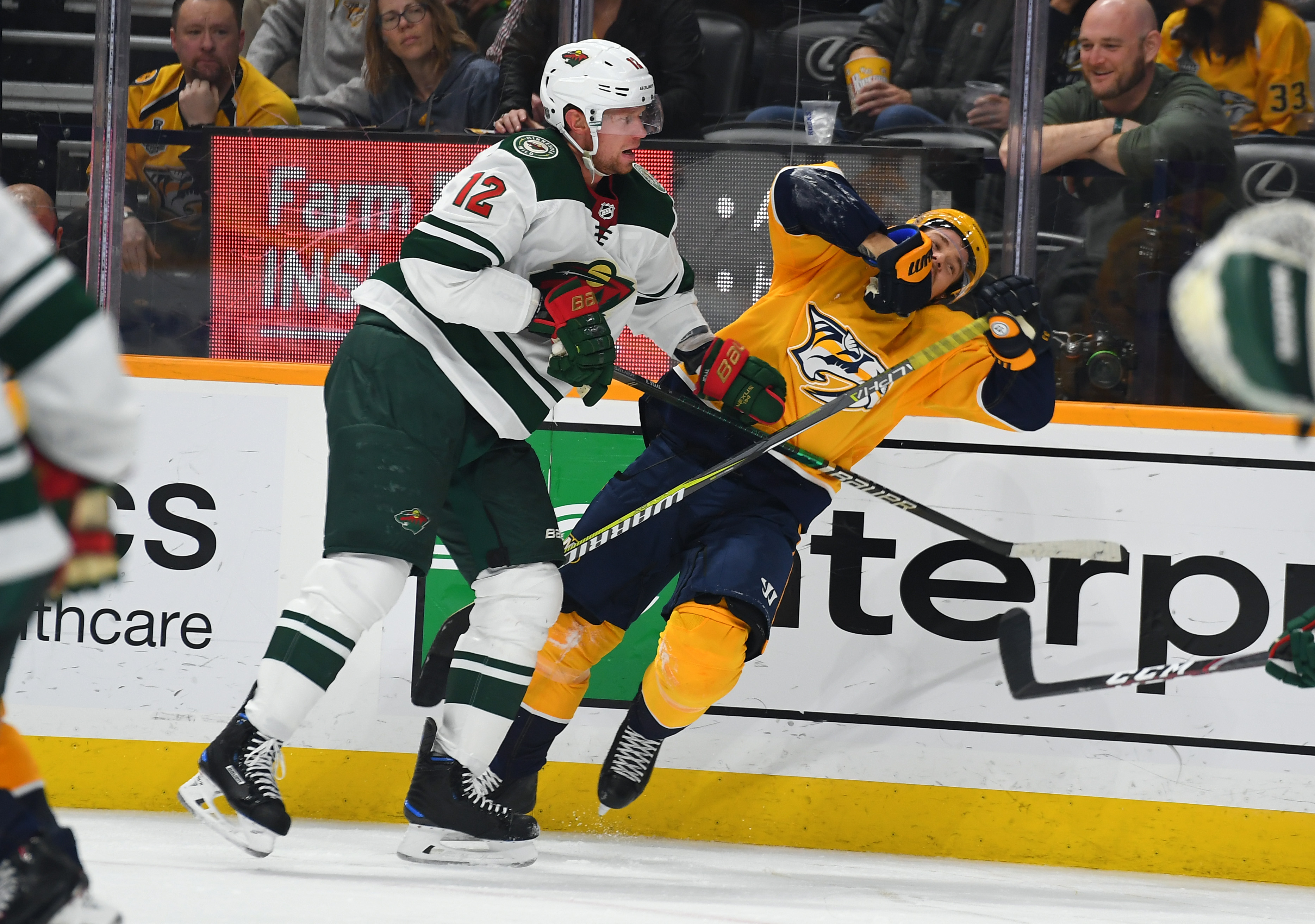 It was a reality check of sorts on Sunday as the Wild experienced what it was like to play a division leader again as Alex Ovechkin lit the lamp twice in the Capitals 4-3 victory over Minnesota.  It wasn’t a disaster but the team saw first hand how mistakes result in goals unlike its experience the previous week where their opponents were too inept to make them pay for those errors.  So with that reality check behind them they now have the extra pressure of playing a critical divisional game against Nashville.

The Predators are ahead of the Wild in the standings.  Nashville has struggled to string together victories and this has allowed the Wild to creep ever closer.  Can Minnesota claw their way into the playoff picture with a win over the Predators?

1st Period Thoughts:  The pace was fast and both clubs were not giving much away in regards to time and space on the ice.  Any chance to shoot the puck was taken.  Dante Fabbro would fling a wrist shot that was redirected by Mikael Granlund that rang off the left post and stayed out.  Minnesota tried to get some traffic in front of Juuse Saros but the Predators were dropping down to block shots with the kind of desperation you normally only see in the post-season.  The Predators were doing a good job of getting sticks and bodies into shooting lanes, but the Wild kept applying pressure and their persistence would be rewarded.  Joel Eriksson Ek would win a battle for the puck down low and he’d feed a pass out front to Luke Kunin waiting in the slot for a good chance that Saros stopped but he couldn’t keep out Kunin’s rebound chance.  1-0 Wild.  Nashville tried to counter attack but Minnesota was backchecking well and able to thwart the rush before it was ever able to generate a shooting opportunity.  The Wild were continuing to swarm and working pucks down low and then hoping to send a pass out front for a quick strike.  Minnesota was winning most of the small races to loose pucks and the battles along the boards.  The Wild’s hustle and pressure was starting to yield turnovers by the Predators as a turnover in the neutral zone turned into a 2-on-1 between Jordan Greenway and Kevin Fiala, and the former Predator moved in and patiently waited for Ryan Ellis‘ diving attempt to block the shot slide on by before ripping a shot top shelf over Saros.  2-0 Wild.  It was the kind of goal you see from a confident, talented goal scorer where they perceived the right moment to be patient and focus on having perfect execution.

The Predators would have a great chance as Roman Josi tried racing around the Wild goal to attempt a wrap around before being checked off his skates by Greg Pateryn with a little help from Alex Galchenyuk to deny the Josi’s shot.  Minnesota was putting on a clinic in puck support and it seemed like whenever a Wild skater was knocked off the puck another skater was there to quickly pick up the loose biscuit and continue the play.  The Wild had to feel pretty good with their effort through the 1st period, of course it doesn’t hurt to carry a two-goal lead into the 1st intermission.

2nd Period Thoughts:  Both clubs tried to work the puck deep in the offensive zone and get the cycle going but were only able to attempt shots from the perimeter.  Greenway would try to change that as he put his shoulder down powering by Mattias Ekholm as he drove to the net but his one-handed attempt was steered aside by Saros.  The top line would create some havoc with some excellent puck movement, but perhaps the line was a bit too picky as they passed up on some good opportunities to shoot the puck and instead opted to set up Eric Staal for a sharp angle chance that had little chance of finding the back of the net.  Minnesota’s puck pressure would draw a Predators’ penalty as Fabbro was sent to the penalty box for slashing.  The Wild were perhaps a bit too comfortable on the man advantage as they tried to set up Matt Dumba for a one-timer that never made it on goal.  The Predators would get caught with ‘too many men’ to give the Wild a 5-on-3 power play for about 20 seconds.  The Wild had a good initial chance on the 2-man advantage as Fiala fired a shot that Saros knocked down and the Predators were just able to work the puck to the corner.  The Wild’s next best chance on the power play as Kunin found Galchenyuk with a cross-ice pass and he’d let go a snap shot that was held onto by Saros.  Minnesota had a good flurry of chances at the tail end of the power play but they couldn’t get one by Saros and the Predators’s league worst penalty kill would escape unscathed.  The Predators would get a power play of their own as Marcus Foligno was called for tripping.  The Predators’ spent the majority of the power play just trying to get set up in the offensive zone thanks to good puck pressure by the Wild’s penalty killers, most notably Ryan Hartman and Eriksson Ek.  A few minutes later, the Wild’s hustle and puck support would continue to frustrate the Predators and draw a slashing call on Craig Smith.  The Predators’ penalty kill was very aggressive and they spent the first half just trying to retrieve the puck from its own end of the ice.  Once in the offensive zone, the Wild moved the puck around reasonably well setting up Zach Parise for a quick chance that was fought off by Saros and that’s as close as Minnesota got to lighting the lamp and another power play would come up empty.  Just after the penalty expired, Greenway would feed a pass out front where Eriksson Ek’s shot went off the right post and the puck just sat on the goal line for a second or two before it was swept away.  As the Wild kept applying offensive pressure, Saros would draw a penalty when he flopped as he was leaned on by Greenway.  After the whistle, Fabbro would go after Greenway who threw the smaller defenseman to the ice who was hanging on for dear life.  Fabbro would skate gingerly back to his bench.  With the Predators on the power play, about 40 seconds in, it was Hartman getting tagged with a slashing penalty to give Nashville a 5-on-3.  The Predators set up point shot in the first 10 seconds of the 5-on-3 and Smith jammed away at the puck but Stalock held on.  On the very next faceoff, Granlund was called for trying to hold up Jonas Brodin as he was about to clear the zone to make it a rare 4-on-3 power play.  Minnesota’s penalty killers stayed aggressive and Minnesota would still have a 2-0 lead going into the 2nd intermission.

3rd Period Thoughts:  Minnesota would kill off the short remainder of the Predators’ power play and then would receive a power play of their own and shortly after that short man advantage expired the Wild would strike.  Fiala would feed a puck to Staal who sent a shot on goal that Saros stopped but he couldn’t stop Parise who pounced on the rebound.  3-0 Wild.  A few minutes later the Wild would take another penalty as Galchenyuk hauled down Ellis with a hook for an obvious call.  The Predators did not waste the opportunity as Smith knocked down a fluttering puck with his glove and then ramped a shot over the shoulder of Stalock on a shot from the slot.  3-1 Wild with a little under 15 minutes left in the 3rd.  The Wild were sitting back and just defending their lead and predictably the Predators were throwing everything they had at Minnesota.  Stalock was tested a lot while Minnesota was tempting fate by being so passive.  What helped stave off some of this pressure by the Predators were a few Nashville penalties.  The Wild did very little with the power plays but it did give Stalock a little relief from the siege.  As the Predators wanted to go back on the attack, Granlund would trip up Mikko Koivu for another Wild power play.  Minnesota again was mostly content to keep the Predators occupied and defending in its own end.  Brodin would get called for tripping with a little over 2 minutes left and the Predators swarmed the net early as Smith fired a shot on goal that Stalock stopped and then Granlund tried to chip over the sprawling goalie but just missed wide of the Minnesota goal.  The last minutes was a scrambling affair as the Predators tried to overwhelm Minnesota with an extra attacker but Stalock and the Wild would hold on for a 3-1 victory.

In a school day game in San Jose, the Barracudas gave the 3,953 in attendance something to cheer about just 29 seconds in as former Blaine Bengal Jonny Brodzinski scored off a pass by Maxim Letunov.  Iowa would try to answer back but couldn’t manage to get anything by Josef Korenar or Kaapo Kahkonen.  In the 2nd period, Iowa would tie the game up as Connor Dewar fed a pass to Sam Anas who lit the lamp.  In the 3rd period, Iowa tilted the ice in their favor peppering Korenar with 15 shots on goal but the game would go to overtime.  In overtime, it was a back and forth affair with both teams trading odd-man rushes against one another.  Despite a shot off the post and a number of other ‘oh so close chances’ in overtime it was the Barracuda’s who would earn two points as Brodzinski struck again to give San Jose a 2-1 victory.  Kahkonen had 25 saves in the loss.  Iowa finds itself 5 points behind 1st place Milwaukee.

LW – Kirill Kaprizov (CSKA Moscow, KHL) ~ the skilled winger had two assists in a 3-0 win over Nizhny Novgorod Torpedo to earn a 1-0 series lead.  Kaprizov has 2 helpers so far through 1 playoff game.

F – Nikita Nesterenko (Chilliwack, BCHL) ~ the Boston College commit had an assist in Chilliwack’s 3-2 loss to Surrey as their playoff series is even at 1-1.  Nesterenko has 3 helpers so far in 2 playoff games.