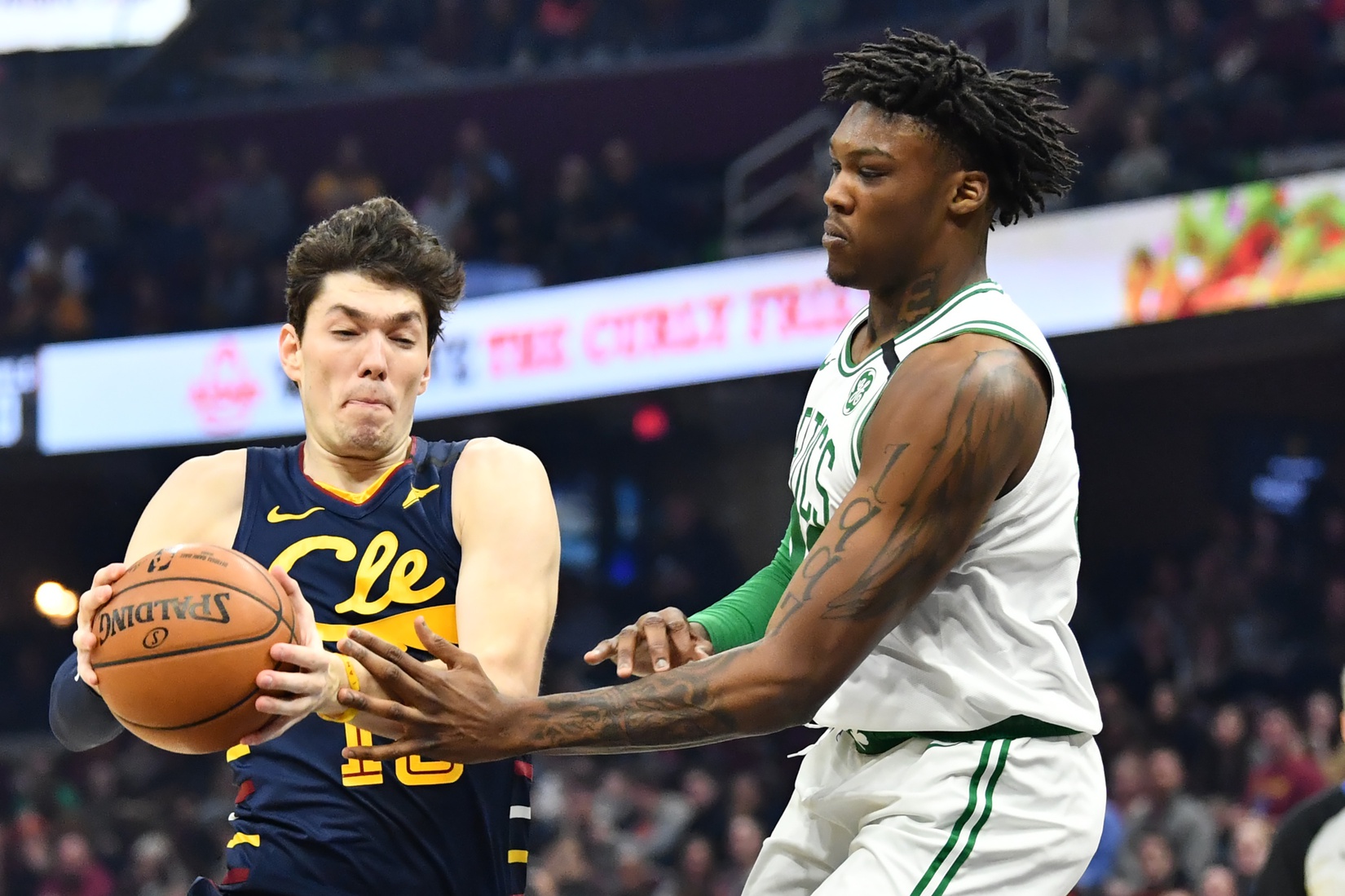 Barely 24 hours after one of the season’s most baffling and ignominious losses, the Celtics were back in the fray, against the worst-in-the-East Cleveland Cavaliers. With three starters missing from the lineup, no less: Kemba Walker resting his knee, Jaylen Brown and Gordon Hayward out with leg injuries.

Jayson Tatum and his 34-9-6-2-1 line led the Cs to a 112-106 victory. But with all the injuries and this being the Cavs, I can’t say it was a particularly good game for anyone but Tatum—well, except for Semi Ojeleye, who out of nowhere dropped a career-high 22 points on 73% shooting and did bring energy to a game otherwise lacking it whenever he took the floor.

Tatum dictated the tempo of the game early and kept Boston on an even keel—but in no way was this enjoyable basketball. This Wanamaker move was kinda slick, I guess:

But, honestly, I mean…

a battle for the ages

Nice pass from Tatum to Timelord. Good aggressive finish for Williams in the paint.

Forgot how much I missed TimeLord doing things

The Celtics were not playing with particular discipline or defensive acumen, but held the narrowest lead 12 minutes in:

Then in the second quarter, there was the only thing as unexpected as the Spanish Inquisition: a scoring surge by Semi Ojeleye:

Four of five on threes! But we simply can’t have nice things:

Semi looked like he might have been in more than the usual pain associated with a knee to the groin. https://t.co/h4Mzrd6QLw

Let’s balance that with something positive:

Between Tatum’s expected dominance and Semi’s wild-card sniping, the Celtics got ahead by as much as 13 points. But they should’ve been stepping on the Cavaliers’ collective neck, and weren’t.

HALFTIME RETURNS: Those who invested in Semi Ojeleye have turned a nice profit, helping the #Celtics cling to a 58-52 lead vs the #Cavs
🔥'n up: Semi Ojeleye (season-high 15 pts … and counting)
⬆️ Tatum (17 pts leads all #Celtics0 scorers)
⬆️ C. Sexton (Game-high 18 pts)

It turned out that the knee to the nuts poor Ojeleye took was more serious than expected, and injuries weren’t limited to the Cs:

#NEBHInjuryReport Semi Ojeleye (knee to groin) is questionable to return.

The Cavaliers announced that Kevin Porter Jr. is being evaluated for a head injury and is doubtful to return to tonight's game.

This team cannot catch a break.

And somehow, in the meantime, the Cavaliers first caught up to the Celtics’ score, and then overtook it. Briefly. But, c’mon, even without three starters the Celtics should’ve been comfortably ahead of a Cavs team that, on its best days, looks like a hectic run-and-gun mess and is led by one of the most uniquely miserable humans in the NBA (Kevin “I Can Afford It” Love).

Yet it remained close through most of the third quarter.

Grant actually gave the game many of its best moments:

Up 4⃣ after 3⃣ pic.twitter.com/kERrMEBlab

The final frame played out as a war of attrition with the two squads trading leads, both having given up on defense almost entirely. This is fun when two healthy, good teams do it; these Celtics and these Cavs at the moment are neither good nor healthy. Not a fun watch! (Fortunately, the Celtics’ quality issues are temporary, whereas the Cavaliers’…are not, although on the bright side, Collin Sexton and Darius Garland might actually be good.)

.@semi's doing it all tonight 🚫 pic.twitter.com/ODwCHgaIgT

Semi continued to effectively make his argument not to be cut from the roster next year, and that is ultimately what sealed the game for Boston—that and some clutch points from Smart in spite of his bad shooting night. But I don’t think anyone would call that a great game for our heroes, and I also think they’re just as glad it’s over as I am.