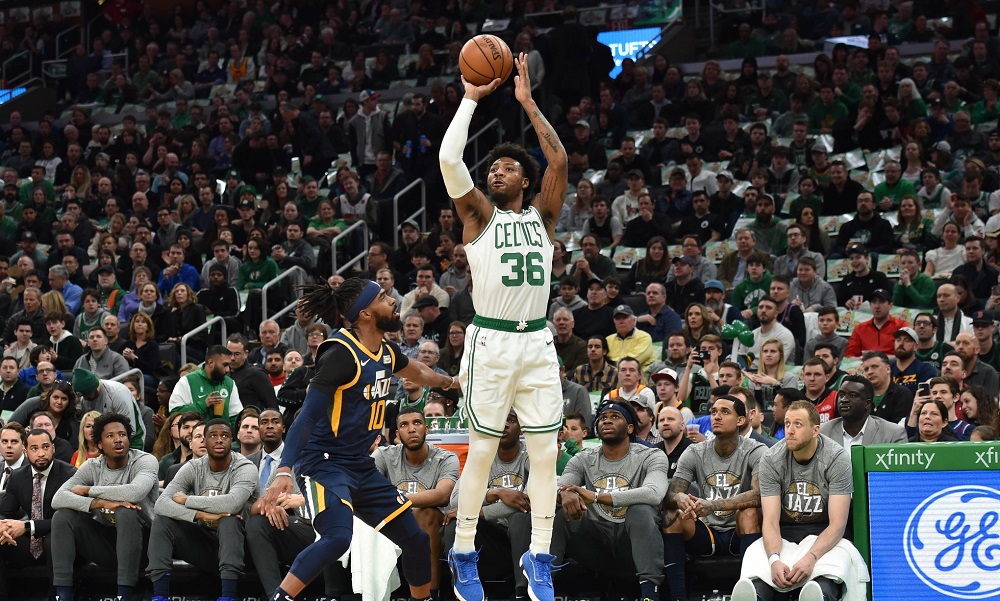 Birthday boy Marcus Smart led all scorers with 29, but made just 9-of-23 shots (and 6-of-15 from the arc). Jayson Tatum came back to earth, scoring just 18 on 7-of-19 shooting, ending his five-game streak of 32 points or more. And Kemba Walker was not himself, making just 5-of-17 for 13 points. Daniel Theis was one of the few bright spots, with 12 points, 9 rebounds, and solid defense.

To their credit, the starters were all in the positive for plus-minus, but the bench was brutal and deeply into the minus side.

Utah was led by Mike Conley, who killed the Cs all night and finished with 29 points (9-of-16, with 6 threes), and Jordan Clarkson’s 17 points (more than the entire Boston bench). Joe Ingles was steady with a team-high 6 assists.

Surely you’re not surprised that Boston was shorthanded.

#NEBHInjuryReport for tomorrow vs Utah:

Smart made his first 3 threes in the first quarter.

The birthday boy for three 🥳 pic.twitter.com/luRgHHE1sE

Daniel Theis made an early impact.

Celtics are running that seal play for Theis to block out Rudy Gobert almost every time and it's working perfectly. They're negating Gobert defensively right now

Theis getting it done on both ends 💪 pic.twitter.com/cmKTQh4ho3

Celtics opened the game 10-of-13 from the field before that last miss.

… until the Jazz closed the quarter with a 14-2 run, during which Enes Kanter smoked two bunnies. We didn’t know it then, but the Celts would never lead again.

#Celtics capsizing since their bench rotated in. 32-12 run going back to midway through the 1st for the #Jazz.

I said it this morning: Utah's offense has been sizzling over its last three games, and that has carried over to tonight. Jazz enter halftime shooting 60.5% from the field, 61.9% from 3.

The bad news continued in the third quarter.

Conley has already tied his season high with five 3-pointers. Still 10:00 left in the third.

Boston's zone has frustrated Utah here in the second half.

Celtics are also up to 8 offensive rebounds for the game.

The Celtics have played multiple possessions of a 3-2 hybrid zone, and you will 100 percent see that again against Milwaukee.

Tatum wasn’t shooting well, but he did this.

Jazz rebuilt their lead to 11.

Brad Stevens won a challenge (although the Jazz scored anyway after winning a jump ball).

Just two points for the Celtics in the final 4:54 of the third quarter.

After the 3rd, nothing had changed from halftime.

Man, the Celtics are just making uncharacteristic decisions tonight. Some ugly play, but still a quarter left to make a run at a win. They enter the 4Q down 79-66.

That Wanamaker airball from three feet on a wide open look was a Hall of Fame level miss.

And the shooting, or lack thereof…

The Celtics hit four 3-pointers during the first 4:09 of tonight's game.

They have hit four more over the ~36 minutes since.

Down 87-78, the Celtics got several consecutive stops on defense, which was a trend.

But Smart and Grant Williams missed wide open threes on consecutive possessions, squandering chances to put pressure on Utah. Then Conley drained a three to push the lead back to 12 with 5 minutes left.

Tonight is just the third instance this season in which Mike Conley has scored more than 22 points. He has 23 with 3+ minutes left.

Boston got it down to 7 at 96-89, but on two straight possessions Wanamaker ended up missing threes – badly, one of them an airball. Those were the final nails. Utah scored only 37 in the second half and still were never in danger.

Just 60 points for Celtics tonight over the final three quarters.

That buzzer Smart 3 saved the Cs from their lowest scoring game of the year. But it was still ugly.

The Celtics returned home from the west coast 35-1 this year when leading by 11+. They've lost 3 of 4 since, all at home.