UND Hockey: We, Us, and Our 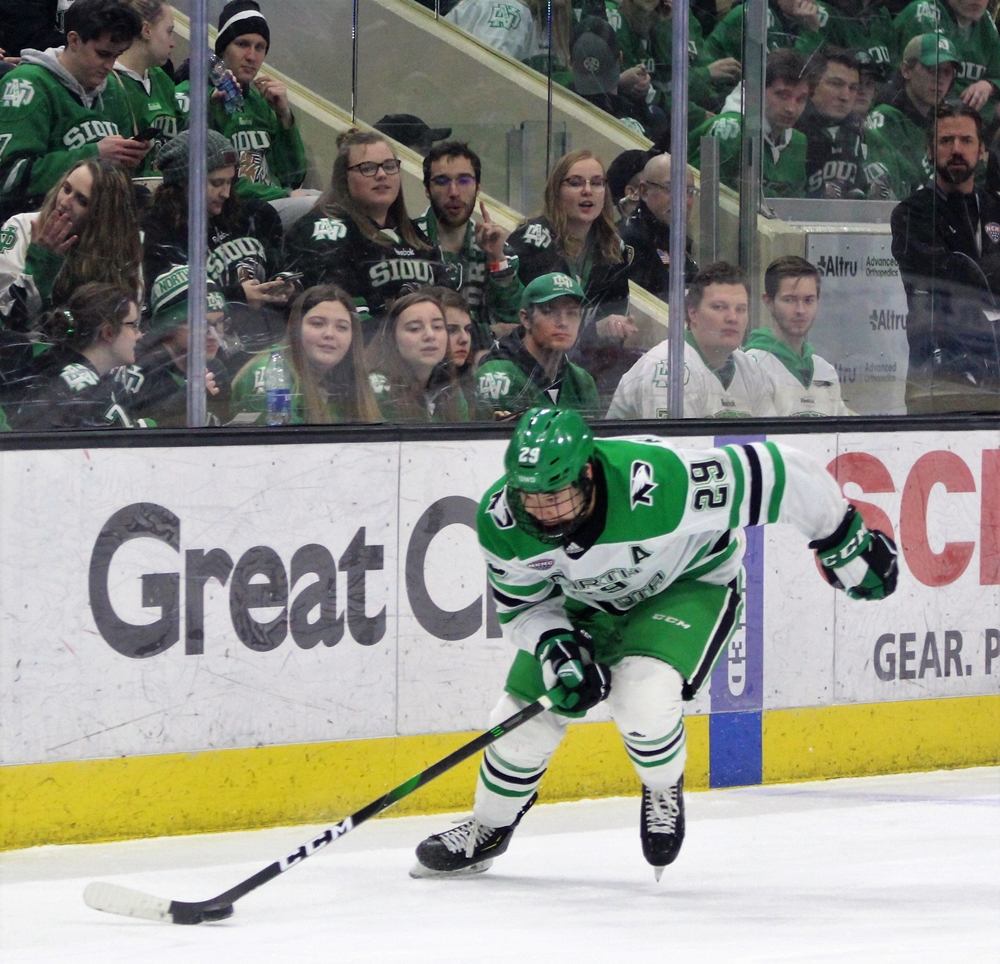 UND Hockey: We, Us, and Our

To date, the University of North Dakota men’s hockey team has had a successful season. The Fighting Hawks 25-4-4 sit atop of the NCHC standings with a 16-3-3 Record. If the NCAA playoffs started today, they’d be the number-one overall seed. I know, I know. Let’s not get ahead of ourselves. The NCAA playoffs don’t start today, and there’s a lot of work left. So far, so good.

Offensively, UND’s junior class has set the pace, scoring 44 of 129 goals (34.1%). The Hawks top forward line is comprised entirely of juniors; Grant Mismash, Collin Adams, and Jordan Kawaguchi, and they have scored an impressive (35g-57a—92pts). For those that like plus/minus stats, they’re also an eye-popping plus-67.

It started on day one. No matter what, when asked about a particular play, the player in question will almost always defer the credit to one of their teammates. To a man, the 2019-20 UND hockey team has been focused and on message. They’ve been very disciplined. There haven’t been any passengers. Everyone appears to have bought in.

Looking at their record and the NCHC standings it’s been a historic season. After 19 home games, their record is 18-1. The best ever on home ice. The only blemish, a 6-3 loss to the Omaha Mavericks back in January.

Last season, after a disappointing ending, it would’ve been easy for senior captain Colton Poolman to sign a free agent deal with an NHL team. Instead, Poolman returned to Hawks to help right the ship.

After a two-year hiatus, the Hawks have reemerged on the college hockey scene. As I mentioned above, the Hawks have secured home ice for the quarterfinals of the NCHC playoffs. They’re close to securing a number-one seed in the NCAA playoffs. Things are going well. It’s been a traditional UND hockey season. Fight for a league title and be in the conversation for the NCAA playoffs.

“It’s a good bunch of guys,” Poolman said. “No one is singling out themselves. It’s all for the team. It’s so fun to see different guys succeed at different points in the season.

“Guch (Kawaguchi) is having a hell of a year. He has risen to the occasion, so has Matt Keirstead. They’re two very humble guys, to have those guys as leaders in your locker room, sets a tone for everyone else. These guys play hard every minute, no matter what, and it shows to the young guys that you have to put in the work first to get to that level.”

When asked about being in the conversation for the Hobey Baker Memorial Award, Jordan Kawaguchi took it in stride. the team has bigger aspirations than individual awards.

“It’s cool to have my name put in that conversation,” Kawaguchi said. “But at the end of the day, it’s 27 guys in that locker room, and I look forward to coming into that dressing room every day and building the relationships that I have with my teammates.”

Kawaguchi continued: “being able to win a national championship would be unbelievable. Individual awards are cool, but it’s more fun when you can share the accomplishment. That’s what we are going for.”

Head coach Brad Berry was very business-like when talking about his Hobey Baker candidate. The Hawks have bigger goals in mind. To a man, the focus is a deep run through the NCAA playoffs.

“We always knew he had the god-given skills and the gifts,” Berry said. “When it came to his body, he needed to get to another level, and he did that. He continues to do that. Hats off to him on that. Like I tell you guys all the time, consistency is the ultimate compliment you can give a player.  He’s brought consistency all year, in his game, which kind of pushes the bar with the rest of our group.”

“He would never toot his own horn, but at the end of the day, you know we have one of the best players in the nation and in our group here,” Berry said.

I’ve been covering the University of North Dakota hockey team since the 2011-12 season. During those nine seasons, I’ve never met a more humble group of players.

“It’s we, us and our,” Berry said. “All of our staff says that.  (Kawaguchi) as a leader says that. I grabbed him yesterday, knowing that this campaign was coming out. Just out of respect to him. I asked him, here’s what’s coming, are you good with it?

It sounds like Kawaguchi’s answer was pretty low-key as well, “whatever you think coach — (do) what you have to do coach going forward.”