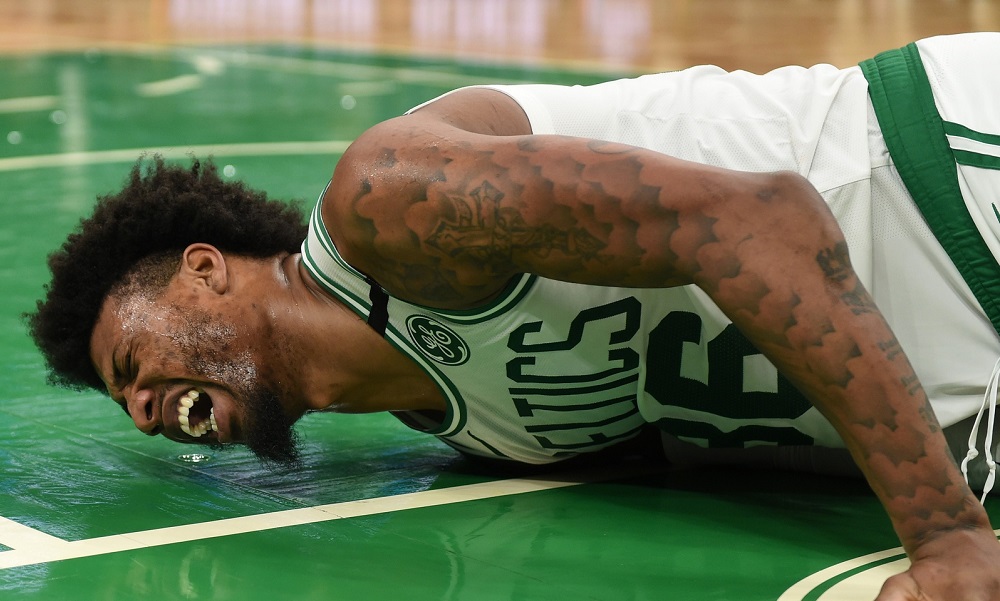 The first 8 minutes were great for the Celtics, but the final 40 were all futility as Boston lost at home to Utah, 99-94. The Jazz got payback for the Celtics beating them last week in Salt Lake City.

Coach Stevens seemed to be experimenting with his substitutions, and it didn’t go unnoticed – especially because they didn’t work well. The Boston starters ran out to an 11-point lead in the first quarter, but the game turned toward Utah once the benches got involved.

The Celtics fell behind by as many as 16 points in the second, a period in which Jayson Tatum and Daniel Theis (who outplayed Rudy Gobert for the second time this year) barely saw the court. Semi Ojeleye actually played far more in the first half (20:54) than did Tatum (14:57).

Tatum sat the first nine minutes of the second quarter while the Celtics were getting smoked.

The Celtics are currently trying out a lineup with Smart, Wanamaker, Javonte, Ojeleye and Rob Williams.

I understand the injuries, but I'm not 100% sure what Brad Stevens was doing with his rotations here in the 2nd

In the third, the starters whittled the deficit to 5 points, but then Stevens went to Robert Williams, Javonte Green and Grant Williams, along with Brad Wanamaker. By the end of the quarter, Boston was down 13 again.

Celtics went the final 4:54 of the 3rd without a field goal

Bad Brad W. and the bench

Wanamaker was glaringly the worst bench offender with minus-25 in 26:26. In the third, he airballed a 5-foot runner (Mike Gorman: “What happened there?”), and in the fourth, when Boston was desperately looking for a final run, BW missed badly from the arc on two consecutive possessions.

A 3-guard line up in crunch time with Wannamaker in it…why?

He wasn’t alone in his misery. Every Celtics substitute was on the negative side of plus/minus, including how-is-it-possible-? numbers from Enes Kanter (2 points and minus-13 in 4:39) and Romeo Langford (zero points and minus-16 in 5:08).

Marcus Smart took a lot of shots last night – 23 field goal attempts and one knee to the groin (so many nut shots this season!). The officials somehow didn’t notice the knee, which should’ve been an offensive foul, and when Smart complained, the refs compounded their mistake by hitting him with a technical.

It should be illegal to hold against anyone their words or actions after getting hit in the nuts.

Marcus was the game’s high scorer with 29; even so, his high number of attempts wasn’t ideal.

Also, 15 of Smart’s shots were from behind the arc. He made 6 of them, which is a solid 40%, but Tatum and Kemba Walker attempted only 12 threes combined. That should not happen.

No one would ever question Smart’s desire or commitment to winning, and I’ve defended his shooting on many occasions. But the fact is that he currently ranks no. 129 out of 130 players on the league’s list of FG% leaders. Maybe instead of actively seeking out three-point shots, he should focus a tiny bit more on getting into the paint and setting up his teammates.

The young All-Star had his first ordinary game in a while, making just 7-of-19 on the way to 18 points. Still, even with his streak of 32-points-or-better games on the line, Tatum didn’t force his offense. Instead, he made the play that was right at the time. Example:

Burned again by a high-scoring guard

Over the last five games, the Celtics defense has been especially vulnerable to being cooked by hot individuals.

Those LeVert and Sexton numbers were career highs, and word was that Conley had just about his best performance in a Jazz uniform since joining Utah this season. The Celtics lost three of those five games. They’d better get a handle on the problem fast, because Chris Paul is coming to town tomorrow.