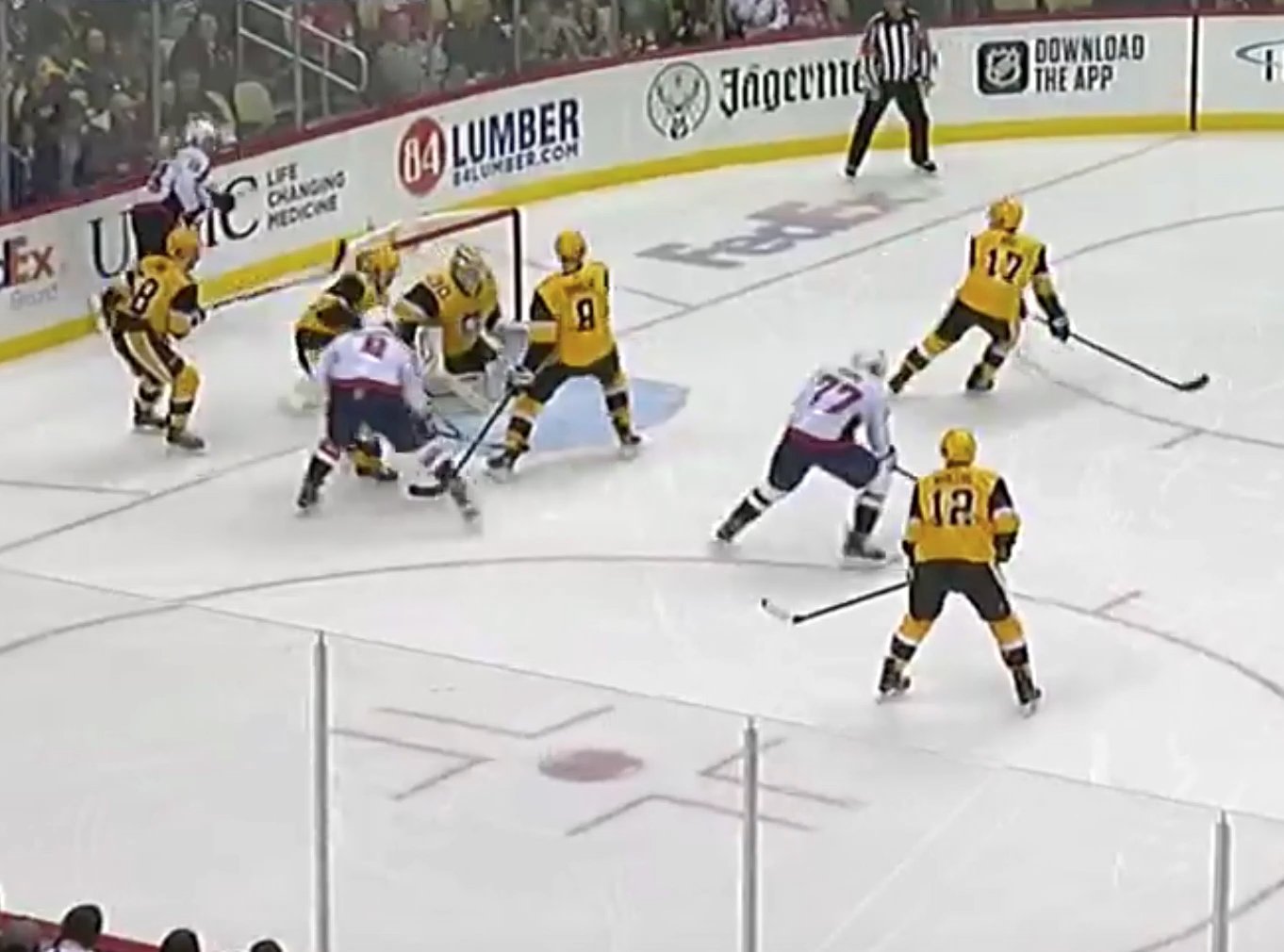 No one ever claimed this season was going to be easy, and with the chance to blow the division wide open against a team that came into this game with a 10-12-2 (including 1-5-1 in their last 7) record against divisional opposition, the Penguins…laid an egg.

At least through the first half of the game.

But by that point, the Caps lead was too large for them to really ever come back from en route to giving themselves a 2 point cushion atop the Metro, separation Washington desperately needed over the surging Flyers.

And it’s not as if the Penguins didn’t have their chances, either, particularly an extender 2 man advantage and 5 total powerplays.

But defensively, they were an unmitigated disaster.

Via Natural Stat Trick, the Penguins allowed the Caps to just live in front of Matt Murray all game long.

With the division and/or home ice on the line and the Penguins playing their next 9 games and 13/15 against divisional teams, this sort of performance cannot be replicated again.

And it has to be put in the rearview mirror pretty damn quickly.

Pens rolled with nearly the exact same lineup that topped Buffalo on Thursday night, right down to Murray making his 3rd straight start to gear up for the playoffs.  The only exception was Sam Lafferty getting a jersey, skating on the 4th line in place of Evan Rodrigues.

It felt like it took two hours to get to the first goal with the start of the game filled with so many whistles, but it was almost Jared McCann getting us going with an early chance walking down Fifth Ave. on his first shift of the game, but was turned aside by Holtby.

As the fourth line jumped out onto the ice and got set up in the neutral zone, the Caps followed it by looking to break out.

The stretch pass ended up being a dump in on Matt Murray’s goal on what would’ve been an icing.  With it being on net, Murr had to just turn it to the corner.  Panik got the better of Letang on the race, hitting Hathaway on the other side of the net.  Dumo was also slow to react, allowing Hathaway to hit Dowd all alone in the slot.

Collective mistakes from the whole 5 man unit here.  Don’t see Letang get outskated or Dumoulin get smoked like that on a pass very often, but here we are.  Coupled with a complete mental lapse from the forwards here on the backcheck, letting all three of Hathaway, Panik, and Dowd beat them into the D zone and Murr was left out to dry.

A few minutes after the goal, Lafferty got a bit of redemption, drawing a penalty to give the Pens their first powerplay of the afternoon.  Then, 35 seconds into the Dillon minor, Washington was caught with too many men, but the Penguins couldn’t find twine on the 5v3 or 5v4 in spite of a nice look from 87 that went through Holtby and out the other side.

That window was all that the Caps needed to double their lead.

It was just one of those goals, too, where the Penguins were doing work down low in the offensive zone, burn themselves out, and led to all 3 forwards getting trapped below the dots.

As Washington dug the puck out, they broke out up the right side of the ice with Letang shadowing Oshie.  His gap wasn’t enough to prevent Oshie from taking the pass.  Almost looked as if Letang got caught between two minds: dropping off and recovering or pinching to pick the puck.

In the end, Oshie was afforded enough time and space to sling it to Vrana on a cross ice feed, isolating Brian Dumoulin in the process on the 2v1.

Dumo tried to take the pass away, but it wasn’t enough to stop Vrana from finding Backstrom to beat Murr top shelf.

Two straight goals Murr had to face a shooter with no one on his team challenging the shooter.

And about 2 minutes later, it would be a third straight goal where a shooter had a 1v0 look at Murray.

This time, the Penguins had 4 players get trapped along the wall at the offensive blue line.

One of those players was Justin Schultz, jumping in to give the Penguins a 4v3 edge along the wall.

But when the Caps dug the puck out and transitioned, it meant Jack Johnson was left all alone to deal with a 3v1.

Sheary did well to force Dowd into a backwards pass with the backcheck, but none of the retreating forwards were there to take away Nick Jensen as an option.  Jensen walked into the slot, showing shot the whole way and getting Johnson to commit to the block.

In doing so, it opened up the passing lane to Panik all alone at the side of the cage to send the Caps up 3-0 into the first intermission.

responsible adults: okay, just one more. we have an early game tomorrow

It took the Penguins about 35 minutes into the game to really start living a little, accelerated by killing off a Malkin penalty and Letang/Wilson getting into it because Tom Wilson.

Then McCann got a penalty shot on the best chance he’s had to break his slump. Denied.

Then the Penguins top line got in Holtby’s kitchen and looked set on breaking the shutout.  Denied.

That was one hell of a save out of Braden Holtby. pic.twitter.com/ocFYHsw21N

Pens opened the period with 1:35 left on a powerplay as Brendan Dillon sat for intentionally knocking the net off on that last sequence.

But it would just provide the Caps with an opportunity to make it 4.

Watch Hagelin here as he beats McCann to the loose puck on the Pens PP.  Chips it by him, keeps his feet moving, and motors in on a 2v1 on Letang.

Great play from Hags here to sell the shot, creating enough chaos to feed Dowd back on the backdoor and give Murray, for the 4th time on the day, absolutely no goddamn chance at making a save.

At 4-0 and the game largely over, the Penguins started playing and, you’ll be surprised to find out, it was the first line doing it.

With a little bit of puck luck, the Caps soiled themselves trying to exit the zone, ending up with Dillion having to retreat below his own goal line to pick up the loose biscuit.

Pettersson sees that the Caps are on their heels and Dillon is on his backhand, so he pinches down to seal off the wall and take away Dillon’s outlet here.  Crosby slides over, too, just in case there was any question.

Sheary sees Pettersson move that way and knows that he can jump.  As he attacks Dillon, he heads to Dillon’s forehand side, anticipating Dillon deferring to Carlson behind the net.

Sheary reading and jumping it creates the goal, but his work wasn’t done.

And folks, that pass is an OH BOY situation if we ever had one.

Pens got a powerplay at nearly the midpoint of the period.  Did not decline it.  Fifth time’s the charm, they say.

All came from working the puck down low behind the net, getting the Caps 4 man unit to collapse below the hash marks, opening up the low-to-high pass to Malkin.

His initial fake shot bought him some time, but he couldn’t get the actual shot through traffic.  Then he did and he is score.

But before you could even bite your tongue off from thinking of muttering the word “comeback,” Oshie was putting the knife to the Penguins throat.

With Backstrom and Ovi smothering, Letang couldn’t get the puck out.  Oshie ends up taking it and reversing it back down the wall to Backstrom, going straight to the slot.  Malkin got caught watching Backstrom.  As did Dumoulin, Rust, and Marleau.

It meant that absolutely no one picked up Oshie.

Story of the afternoon, really:

this is probably not how you're supposed to defend pic.twitter.com/VYxyFbZ0vO

Ovechkin held without a shot for first time ever in reg season v Pens. He’s 0-0-0 in 3 GP v Pens this season and Caps have won 2 of 3 anyway.

Pens have now lost 5 straight 1 PM start times, getting outscored 22-10 in those games.  Good thing they don’t have another one of those for another…..15 minutes.

Canes come to town in a few.  Go Pens.