Three takeaways from the Islanders OT loss to Carolina 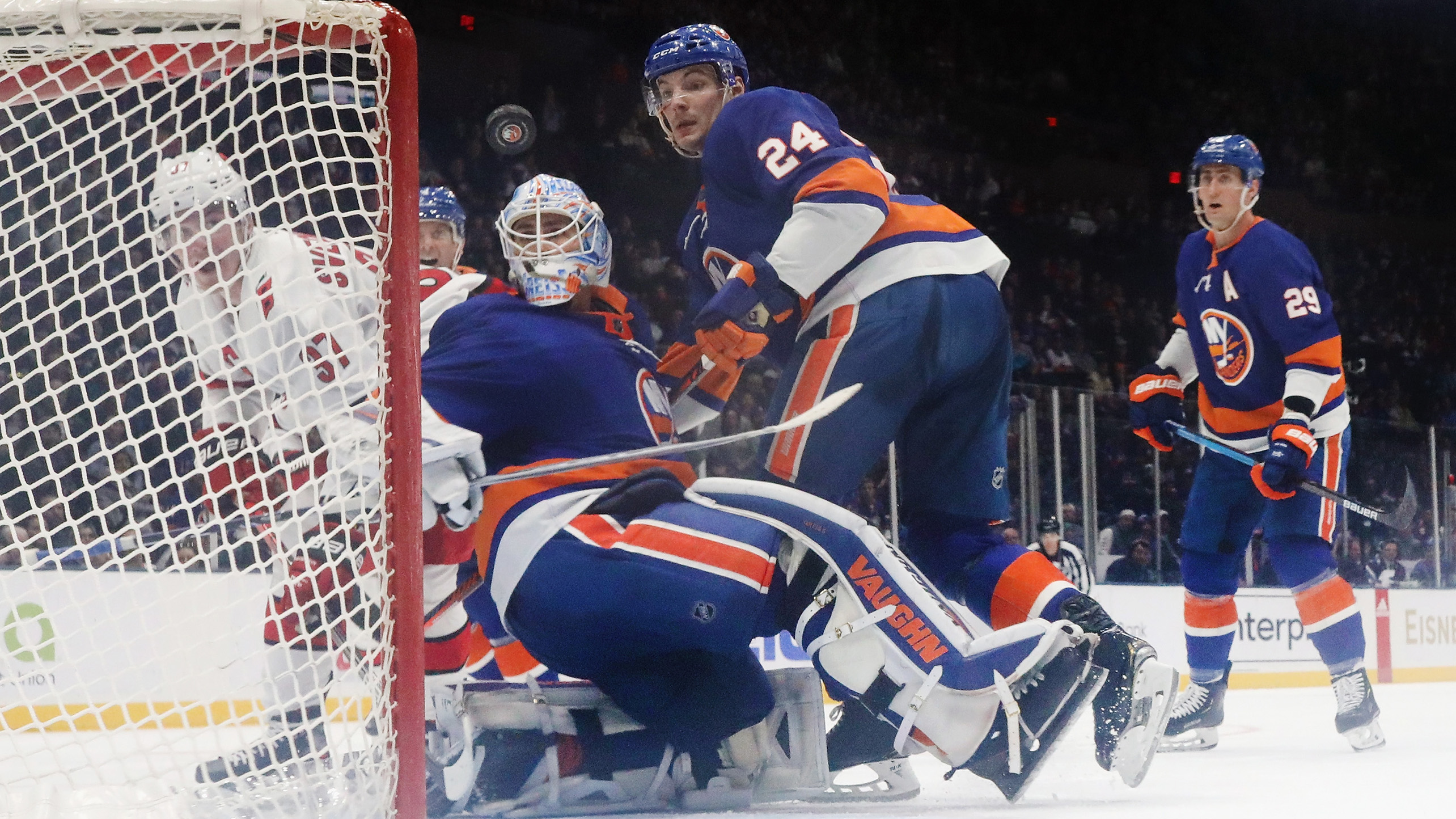 Three takeaways from the Islanders OT loss to Carolina

UNIONDALE, N.Y. — The Islanders rallied from behind twice on Saturday, but fell to the Carolina Hurricanes 3-2 in overtime. Vincent Trocheck scored the game-winning goal 1:36 into the overtime period.

Ryan Pulock and Josh Bailey scored for the Islanders and Thomas Greiss made 25 save in the loss. Saturday’s defeat was the Islanders sixth in a row.

The Islanders were relatively happy with the way they played on Saturday afternoon, but the way the game ended left a bad taste in their mouth. Tied at two in overtime, Trocheck knocked in the winning goal with 1:36 after it looked as though Andrei Svechnikov hit the puck off the crossbar with a high stick.

The officials took the time to review the goal, but it was ultimately ruled a good goal. The official explanation from the league was that “Svechnikov’s stick was below the normal height of his shoulders when he contacted the puck prior to Vincent Trocheck’s goal.”

“You hate to see a game end like that, it was a good hockey game,” Anders Lee said. “That doesn’t sit well at all. I know there’s a rules explanation. We’ll know why, but I’m watching that over there thinking we’re turning this around, we have a draw. Their team was drawing up another play.”

"You hate to see a game end like that, it was a good hockey game and that doesn’t sit well at all. I know there was a rules explanation. I’m watching that thinking we’re turning this around, we have a draw. I’m sure we’ll figure it out, but that’s a tough way to lose a game." pic.twitter.com/oyHF2gM8Ct

The Islanders had played well in the final 40 minutes of the game and managed to battle back twice from deficits in the second and third periods. It Was a Pulock shot in the second that tied the game at one and a rebound goal from Bailey that forced overtime.

“First period you could tell we’ve been a little bit fragile lately,” Islanders coach Barry Trotz said. “They came out, I thought we weathered their storm. We had a lot of zone time, but they didn’t get a lot chances which were fortunate a little bit there. And then I thought we took some penalties and I thought our penalty kill gave us an opportunity and kept us in the game. … Once we killed those penalties off our game ramped up.”

While the Islanders penalty kill staved off the Hurricanes, it couldn’t withstand the four-minute high sticking penalty Mathew Barzal took in the third period.

The Islanders had been on the power play thanks to Brady Skjei taking a late-game tripping penalty, but 28 seconds into the man advantage Barzal takes a bad penalty negating the Islanders’ chance. The Hurricanes waited out the four-on-four hockey and then pounced on the man-advantage when the time came.

“We had them in their end,” Trotz said. “They took a penalty, our opportunity to take over and then we had a little bit of a cardinal sin at the end. You can’t take a penalty that late in the game and as you’re going into overtime. That’s a little bit on us. That’s the difference between winning and losing.”

Isles need to build off Saturday

The Islanders may have lost their sixth straight game, but they picked up a point in the standings and had plenty to build off of. As of now, the Islanders gained some ground in the standings, tying Columbus at 79 points and moving into the first Wild Card spot in the Eastern Conference.

Columbus plays a late-night game against Edmonton, so they could jump the Islanders with a win or overtime loss.

Still, it’s enough to send the Islanders off to Vancouver on a positive enough note. The Isles begin a four-game trip that includes stops in Calgary Edmonton and Pittsburgh, as well as Vancouver.

“You have to (build off this),” Bailey said. “I’ve said this before, it’s a fun time of year to be playing in important games and it seems from this point on the next game is going to be the biggest one. I think tonight was the biggest one at this point and Vancouver will be the next biggest.”