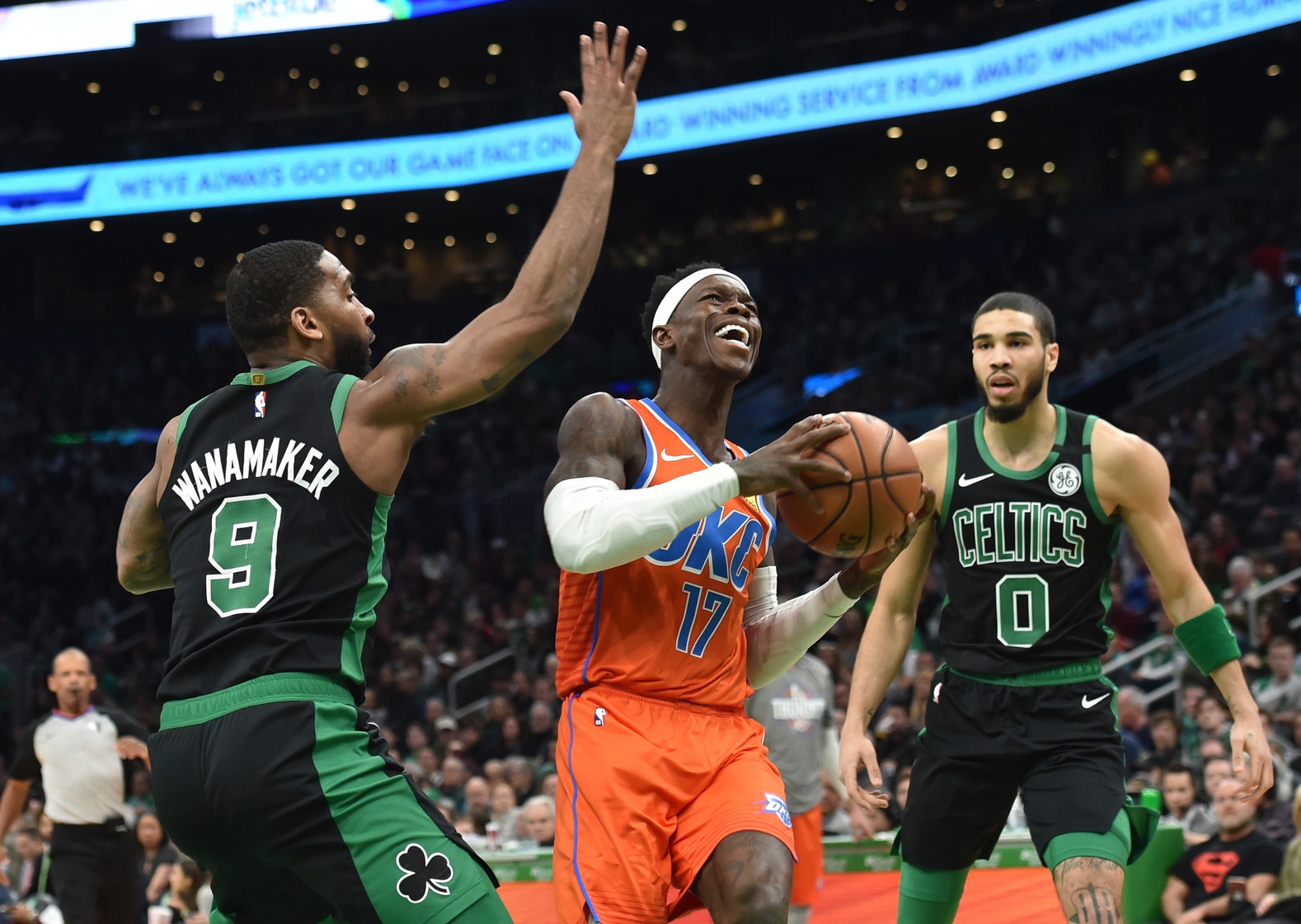 Sometimes NBA teams play poorly for much of a game and still win; other times it’s the exact opposite. The Celtics’ second game against the Thunder was the latter. It was a close game almost all the way, and Boston played well more than they played poorly—but so did Oklahoma City. Mistakes in the fourth quarter by players and coaching alike, particularly in the last two minutes, ultimately led to the Celtics fall, 105-104.

Throughout the first quarter, the paint was often packed with bodies on both sides of the court—inevitable when two teams with top-10 defenses are facing off (Boston at no. 4 in DRTG, OKC at no. 10).

While Tatum was able to make moves like the sweet finish above, the Cs definitely didn’t have an easy time scoring and neither did the Thunder. The main difference was OKC could spread the scoring around more whereas Tatum and Smart were the Celtics’ primary sources of points.

OKC has gotten hot from the outside. 4-7 from deep already.

They traded leads throughout the frame. While the Thunder’s accuracy from deep got them ahead by almost 8, the Celtics scored a flurry of final-minute baskets (a few off of Thunder turnovers) to narrow it to 29-26 Thunder at the end of one.

Three straight makes for Hayward after he opened up 0/3 from the field.

Great way to start the second!

Hayward is One with The Joy Stick

Lead-trading continued to start Q2, and then Boston went on a two-minute 10-0 run, which included the following bench highlights:

Boston’s defense kept Oklahoma City scoreless for a good 4 minutes or so before Danilo Gallinari got to the line for a technical free throw. But immediately after that the wheels REALLY came off for OKC.

Boston has turned the defense way up here in the second quarter. 16-4 run to take a 15-point lead.

37 points and counting for Celtics in second quarter. Just a terrific quarter on both ends for this group.

Jayson Tatum self-created bucket working off the ball. Getting better and better creating space without the ball pic.twitter.com/q2IpkyM4LX

The Celtics were on the verge of turning this game into a blowout late in the second quarter. Thunder went on a quick 7-0 run and got back in the game. Now it's a 5-point Boston lead. If you've watched the Celtics this year, all of this sounds about right.

As Keith’s tweet suggests, the second half began much more like the first quarter—an extremely well-matched, tight contest between two strong teams. But while it was a smaller lead than they undoubtedly would’ve liked due to Chris Paul’s floor generalship, the Cs did hold serve through the first half of the third quarter, and we got cool shit like this all the while:

Bad turnover by Marcus Smart there but he really went all out to make up for it and not only get the ball back, but draw a foul

Hayward was huge in this quarter:

Things got a little haywire in Q3’s last few minutes as OKC paired Dennis Schroder with CP3 for a nimble offensive backcourt capable of making tough shots. The former of those two got the Thunder closer to the Cs in scoring than they’d been all game with a triple to beat the Q3 buzzer.

Thunder are without leading scorer Shai Gilgeous-Alexander, but Paul and Schroder are cooking. Now a combined 16 for 28, 46 points.

Former Celtic Abdel Nader tied the game early in the fourth, Schroder put OKC ahead for the first time since Q2, and then the final frame went back to the war-of-attrition that had dominated so much of the game.

The closeness and intensity of the game let to something of an unfortunate outcome for the final minutes:

Love 6 minutes of both teams being in the bonus

And then we almost had a reaaaallll crisis:

Stevens wins the challenge. Foul ended up going against Nerlens Noel instead.

That would have been Smart's 5th foul. https://t.co/CBgIAgXh2S

The final minute was as anxiety-inducing as anything from the movie Uncut Gems, and about as brutal in its ending. A succession of events good (the block, fast break and bucket by Tatum) to bad (Kemba getting his pocket picked by Schroder, who then had an easy layup) sealed Boston’s fate.