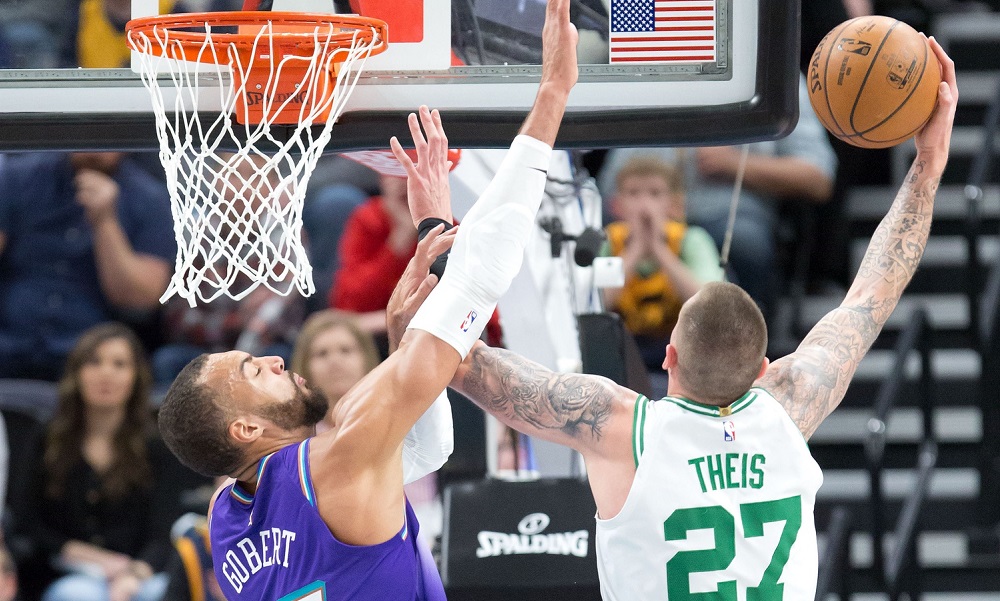 Boston has been able to withstand injuries and illness to all of their wings at one point or another, but how would you feel right now if the NBA resumed and Theis wasn’t available for the Celtics?

Did you feel a little twinge? A tiny sinking feeling?

It’s amazing to think that we’re at this point with Theis. He was always a nice piece of the puzzle for Boston, but he wasn’t enough for most people to feel comfortable with the team’s center situation. Now, he’s somewhat indispensable.

John Karalis has put together a thorough look at why Daniel Theis is having his most impactful season yet with the Celtics. Theis has overachieved as no one except maybe Brad Stevens thought possible. If at some point someone is chosen to receive the Red Auerbach Award (given to the player or coach who best exemplifies the spirit of what it means to be a Celtic), Theis should win easily.

Before this season, I was guilty of thinking the Celtics would be deeply hurt by Al Horford’s departure. As it turned out, it hasn’t mattered at all. Check out this comparison (traditional stats are per 36 minutes).

The complete comparison is here on Basketball Reference.

By the way, Horford makes $28 million this season while Theis is paid $5 million.

Has it really been only 10 days since the NBA suspended its schedule? It feels like 10 weeks. At this point, though, we’ll be lucky if 10 weeks is all we have to wait before the games resume.

Dr. Anthony Fauci, director of the National Institute of Allergy and Infectious Diseases, said Friday that Americans will most likely have to continue staying at home and practicing social distancing for “at least several weeks” amid the coronavirus outbreak.

“If you look at the trajectory of the curves of outbreaks and other areas, at least going to be several weeks,” Fauci said in an interview with Savannah Guthrie on the “TODAY” show.

The world is gradually moving toward a complete lockdown to control the spread of infection. There may be no other choice. The lack of NBA games is just one tiny, unimportant segment of that big picture. Marcus Smart understands.

Shortly before Marcus Smart was told he had tested positive for the coronavirus, social media was jammed with footage of young twentysomethings on the beaches of Florida and Georgia, adding a whole new, dark meaning to spring break.

The Celtics guard was alarmed, knowing he was asymptomatic and had no idea who might have spread it to him, or where he might have passed it on. His first thought was about reaching youth.

Smart quickly posted a video announcement of his situation on Twitter Thursday night as a kind of oral finger wag at those who didn’t take the growing pandemic seriously.

Herald: Marcus Smart wants his illness to educate others

It says a lot about Marcus that he used his situation to demonstrate leadership. He could’ve lamented “woe is me,” but instead he thought of others. This is why earlier this season Brad famously said about Marcus, “I love him and I trust him.”

Last night, Marcus was interviewed live on CNN, where he continued to spread his message.

We will beat this together by being apart for just a little while! #TogetherApart @CNN @ChrisCuomo https://t.co/Wo7TYkJnrv

Marcus Smart says on CNN he's still asymptomatic: "When they told me I had [coronavirus], I was like, 'Oh wow.' It definitely really makes you alert to what's going on and the situation at hand."

Back to the season: the Celtics have so far missed five games (my iPhone still alerts me every time), and my gut feeling is that the rest of the regular season will never be completed. However, unless we get to “it feels like we’re in a science fiction movie” territory, the playoffs should begin eventually.

The best way to help make that happen: listen to Marcus Smart.

And, finally… Fans told to cough it up

When Chris Patrick Adams received the email from the Celtics ticket office on Wednesday, he thought it was to inform him that payments for next year would be pushed back. Instead, it was just an alert that money was being extracted.

Adams, 26, is a promotional products salesperson, and he fears that his industry could be especially vulnerable during these uncertain times. He thinks the Celtics could have just waited a bit.

“It squeezes out people who aren’t recession-proof, whose job maybe isn’t locked in for the next six months,” said Adams, who has a pair of balcony seats in Section 315. “Who knows what’s going to happen? And we all just finished paying for this season and they haven’t finished delivering this season. They kind of owe us a service we’ve already paid for, and here they are asking us to double down in a time of crisis.”

Celtics season-ticket holder Bob Futon said that given the obvious and escalating tenuousness, this week did not seem like the proper time for the team to begin collecting payments for next season.

“I’m sure it’s a cash intake issue for them,” Futon said, “but at the same time they have been paid for games that haven’t been played yet, either. To start charging us for next season seemed a little tone-deaf.”

Globe: Amid uncertainty, Celtics season ticket-holders upset they’re being asked to pay for next year’s seats

Perhaps there’s more to this story beneath the surface, but the Celtics’ stance doesn’t exactly say “we’re all in this together” to fight the coronavirus.

That is just not a good look, and since perception is reality, the Celtics would help themselves by listening to their customers.

Herald: Jayson Tatum’s trainer: ‘Next time you see him on the court he’ll be fresh and ready to go’