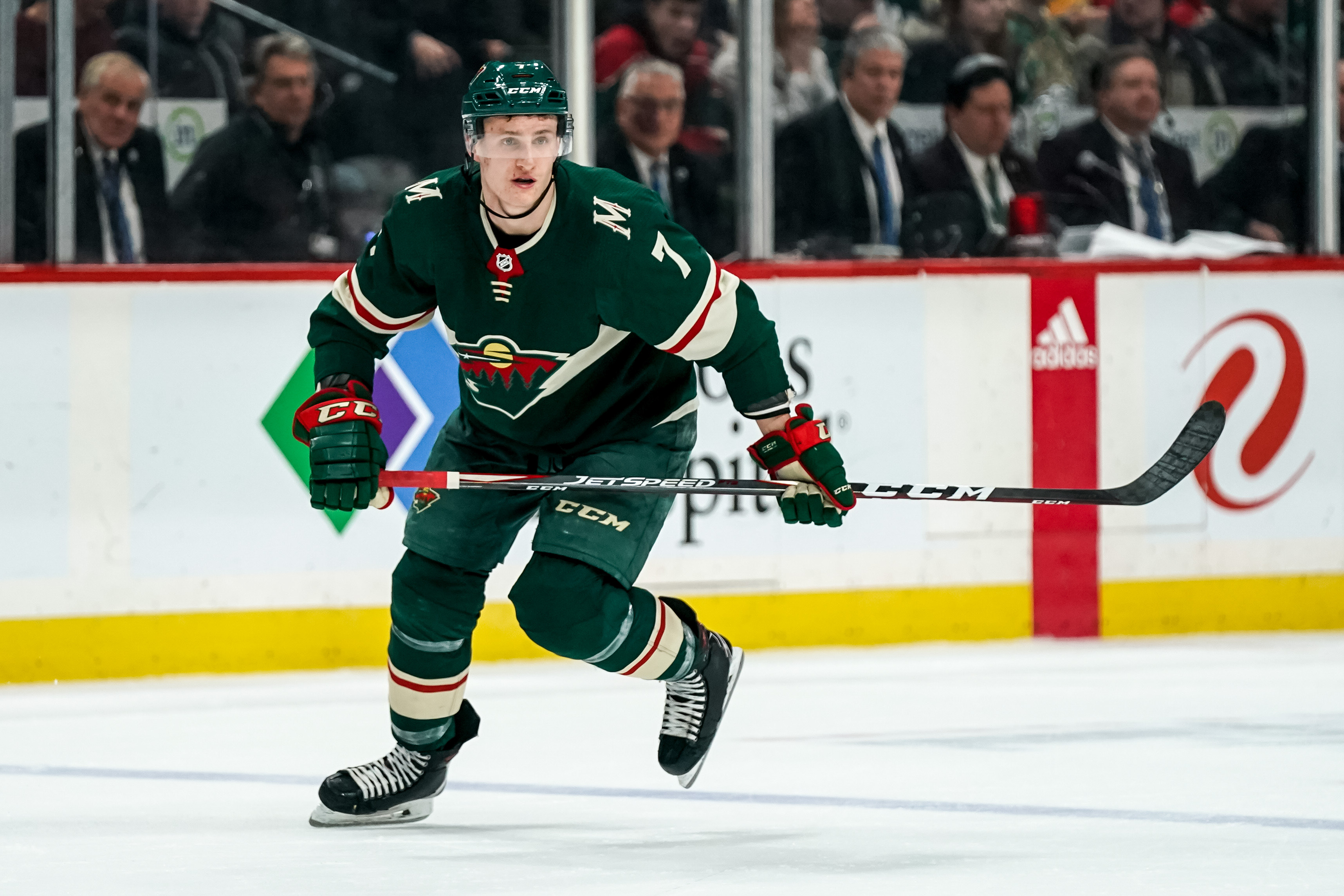 There has been little news to report hockey-wise the last two weeks because of the COVID-19 pandemic, but the Minnesota Wild had made a bit of a news splash on Monday and Tuesday by signing 3 forwards to contracts.  Damien Giroux and Adam Beckman were drafted by the team in the last two seasons while right wing Mitchell Chaffee was signed as a college free agent out of the University of Massachusetts.

With all due respect to Kirill Kaprizov and Matt Boldy, the Wild prospect that has probably created the most buzz has been Saskatoon, Saskatchewan-native and fellow left winger Adam Beckman.  Beckman, who was selected by the Wild in the 3rd round (75th Overall) last summer.  He was said to be a player who had a good release on his shot but could stand to add some strength and more explosiveness to his skating.  After kind of a slow start through the first week of the WHL season, he took off and didn’t look back as he lit it up with the Chiefs and finished the season as league’s top scorer and winning the Bob Clarke Award in the process.

From the highlights above, you can see how Beckman has the ability to score off the rush, or with a one-timer or from in close.  He is probably the best pure finisher in the Wild’s prospect pool since Dmitry Sokolov.  I like how Beckman makes the small moves to change the angle on the goaltender and then releases the shot with great accuracy.  While I don’t think his shot has the velocity of a Sokolov cannonade, Beckman seems to be able to pick the smallest of corners and make it look easy.  He will need to start filling out his 6’1″ 179lbs-frame which will only help make him more dangerous offensively.  The Wild will most likely have to wait at least one more season before they see Beckman as he is not eligible to play in the American Hockey League next year.  Its either the NHL or reporting back to the WHL which is probably where he’ll be next season.  Beckman’s 3-year entry level deal has him being paid $925,000 per year at the NHL level.  He was rated the Wild’s 4th best prospect according to the Hockey News‘ latest Future Watch issue.

“He’s a heck of a find by our scouting staff.  Really quick off the walls in the O-zone.  Has the ability to come out of there and create shots and scoring opportunities coming off the walls.  And he’s got a really good, quick shot.  Really, just good overall hockey sense.  Good instincts, I guess, would probably be the best way to put it.  Good instincts with vision and good hands. I mean, he’s doing everything right now.” ~ Wild Player Development Coordinator Brad Bombardir on Adam Beckman

Another player who had an impressive 2019-20 campaign lighting the lamp was Damien Giroux.  The Hanmer, Ontario-native was a 5th round pick (155th Overall) in 2018.  He had 44 goals this season in 61 games which included 10 game winners.  The 5’10” center needs to work on his skating and his acceleration at the next level but he has been Saginaw’s captain the last two seasons (and was an alternate captain before that) which gives you insight to his character and ability to be a leader.

The interview here is a bit quiet but you can see how he’s calm and composed and he carries himself with a great deal of maturity.  He has been more of a go-to player this season but has demonstrated an ability to be a decent playmaker as well as a finisher.  He is eligible to play in Iowa next season and can be used at center or on the wing.  Giroux doesn’t mind crashing the net and moving into the high traffic areas of the ice.  He is more of a quick player than one blessed with great speed.  His entry level contract will pay him $818,333 per year (for the next 3 years) at the NHL level.

The latest member of the Minnesota Wild organization is Mitchell Chaffee, the 22-year old right winger out of the University of Massachusetts.  The Rockford, Michigan-native is a right shot and has always been an offensive producer for the Minutemen the last three years and was scoring at nearly a point-per-game pace this season.

The two videos above, one where he plays sled hockey allows you to get a bit of insight to Chaffee’s personality as he seems to be a player who is willing to try new things.  In the next video you can see how his right shot comes in handy on the power play in this goal against rival Boston University.

Chaffee was one of 5 college players featured by the Hockey News’ Future Watch issue and was a highly pursued free agent even though he was a junior.  He also was a captain with the Minutemen this season which gives you an idea he’s a leader on and off the ice.  He was signed to a 2-year contract that will pay him $925,000 at the NHL level which isn’t set to start until the 2020-21 season.

“He’s a good one, teams are chasing him.  Power forward, real good down low.” ~ The Hockey News’ Future Watch Issue

Can Chaffee be another Nico Sturm, a college free agent who seems to be nearly NHL ready with 6’0″, 207lbs mature frame remains to be seen, but the Wild continue to add more quality talent to the mix which should help push any player(s) who felt they may have been able to coast.  No doubt, going pro will be a significant adjustment as it was for Sturm, Brandon Duhaime and Connor Dewar this season but all 3 have demonstrated they can help contribute and seem to be on track in their respective development.  The Wild can only hope the 3 forwards they signed today follow a similar path.

The Wild also signed goaltender Hunter Jones to a 3-year Entry Level contract that will pay him $925,000 annually at the NHL level.  The 2nd round pick (59th Overall) from 2019 had a strong season with the Peterborough Petes this season and had a 31-14-3 record with 2.75 goals against average and a .913% save percentage and had 4 shutouts in 49 starts.  His conditioning seems to have improved and he didn’t get fatigued down the stretch the way he did the season before.

Jones was disappointed to be an early cut from Team Canada’s roster at the 2020 World Junior Championship squad, but he probably has a fair shot of making the team next year.  The 6’4″, 194lbs left-catching goaltender is your prototypical big-body NHL goaltending prospect and scouts like his relative economy of movement and the patience he shows in waiting before dropping to his pads to make saves.  The Brantford, Ontario-native got rave reviews at Wild Development Camp last summer for his maturity and he continued to showcase that throughout the season.

Jones is eligible to play for Iowa next season which could mean that we might see a shakeup between the pipes with the big club.  Its no secret that Devan Dubnyk struggled mightily this season and is entering the last year of his contract.  Kaapo Kahkonen was arguably the best goaltender in the American Hockey League and Mat Robson proved to be capable in his first season as a pro.  Could Jones step in and battle for time in Iowa while Kahkonen backs up Alex Stalock who had supplanted Dubnyk this season?  This certainly seems to be a plausible scenario at this point.

Jun 22, 2018; Dallas, TX, USA; Filip Johansson poses for a photo with team representatives after being selected as the number twenty-four overall pick to the Minnesota Wild in the first round of the 2018 NHL Draft at American Airlines Center. Mandatory Credit: Jerome Miron-USA TODAY Sports

The NHL was not the only league still making moves.  The Wild’s top pick in 2018 (24th Overall) right-shot defenseman Filip Johansson was traded from Leksands IF to Frolunda.  Johansson had 2 goals, 4 points, 19 PIM’s and was a -9 in 39 games this season.  The trade doesn’t really change anything for the Minnesota Wild who still hold his rights until 2022.  After two underwhelming seasons since being drafted, there is hope a change of scenery may bring more opportunity and more signs of what made him a 1st round selection.

“He just needs some time.  I know it’s been an interesting journey for him so far, but we still believe in him.  We still think he’s a good player.  You feel that he can play.  The things he does well, he does well. He’s got really good feet.  He moves well.  And his first pass coming out of the (defensive) end is a strength of his as well.” ~ Wild Director of Player Development Brad Bombardir on Filip Johansson

At this point, its safe to say expectations are pretty low.  The Hockey News’ Future Watch issue has him rated as the organization’s #10 ranked prospect.  I don’t speak enough Swedish to know what is being said in this post-trade interview with Filip Johansson but he seems happy so hopefully that will lead to good things in the future for the 20-year old defenseman.