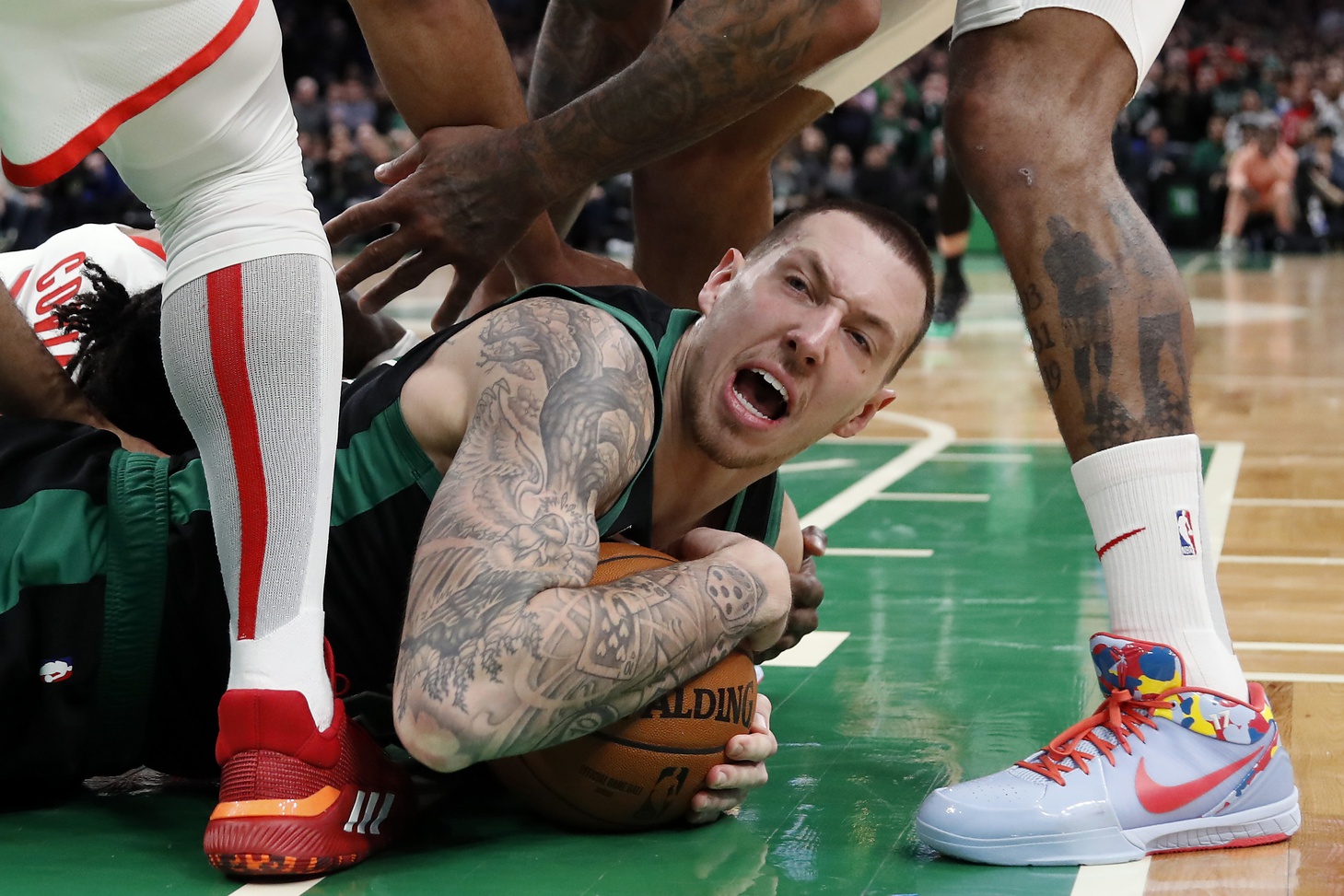 Last week, we detailed the rookie campaign of Romeo Langford. Another Celtic with a promising future, Daniel Theis, finds himself the subject of this week’s review. Oh, and I promise it will be a little shorter this time!

The German National has remained remarkably efficient despite being trusted with a starting role and a career-high in minutes. The decision to make Theis the starting center has been a good one, as evident by his 130 offensive rating and impressive defensive performances.

Still, like any player, Theis has room to improve, which I will delineate after breaking down some of his strengths.

After the departure of Al Horford, many wondered how the Celtics would keep opponents away from the rim. The duties fell to an often injured, yet springy Robert Williams and third-year man Daniel Theis.

The latter picked up the responsibility and has been overperforming expectations. The tape gives us all we need to know. Firstly, watch him display underrated switchability before swatting away the shots of guards who are all quicker than he is.

Then, watch Theis demonstrate the aspect of his shot-blocking prowess that is more mental. He is an incredible helper from the weakside. An awesome leaper when jumping off of two feet, Theis times his runs perfectly to turn away would-be layups.

If these highlights don’t do it for you, then watch this minute-long clip of Theis blocking Collin Sexton; someone who has been rejected by DT seven times this season.

Ready for me to fling some stats your way? On the (suspended) season, Theis is averaging 1.18 points per possession (PPP) as a pick-and-roll roll man. This places him in the 66th percentile. In other words, he is in the top third of the NBA when it comes to rolling on screens.

Specifically, he ranks above Bam Adebayo, Domantas Sabonis, Karl-Anthony Towns, Joel Embiid, Andre Drummond and Al Horford, all of whom are current or former All-Stars.

What’s more, Theis is a roll man in 27.6 percent of his plays while he is on the floor. Out of all players with an equal or higher frequency rate, Theis ranks at the 10th most effective in terms of PPP. But now, let’s watch some film.

Did you notice a pattern in the film above? Theis is one of the most patient rollers you will see in the NBA. Many bigs need years to learn how to read the opponent during rolls. Not Theis. He avoids the mistake of constantly diving hard to the rim. Instead, he picks his spots, bounces in place until the defender gives him space, then makes his move to get off a jumper or dunk.

This is most apparent when watching Theis roll to space rather than the bucket. Again, it is evidence of a cerebral player with a growing feel for the game. Check out how he finds the gaps during rolls and calmly makes the defense pay for it.

Not Al Horford as a Passer, but Close…

In addition to his rim protection, pundits and fans believed the Cs would be missing Horford’s facilitating. While DT is not quite as talented as a passer, he still brings something to the table. Particularly, he has shown how to operate from the perimeter and can hit cutting teammates.

He also makes opponents pay when passing out of the short roll. In fact, this is a set I wish Brad Stevens ran more for Theis. Kicking out from the center of the court to skilled floor spacers is optimal offense.

It’s time to throw some water on those passing flames I was just gushing about. Although he has the ability to make great reads, Theis can also play a predetermined style of basketball.

There are times when he correctly predicts the mismatch but fires a pass that is mistimed. Instead of letting the play develop at the appropriate pace, he can be sped up or play a step behind.

Many of the turnovers above are the result of telegraphing passes. This indicates he has his mind made up before the play ensues. Theis already shows a solid feel for the game yet, more time spent alongside his fellow starters is needed to solidify chemistry and timing.

Standing at 6-foot-8, Theis is one of the smallest starting centers you will see in the league. Does he have the wingspan to make up for it? Nobody seems to know. There is actually an online petition calling for Celtics brass to release the data.

Regardless, Theis often loses inside battles to bigger players. This is compounded when considering most players he defends are bigger than him.

In the clip above, you saw DT’s truest weakness exposed in a variety of ways. LaMarcus Aldridge bullied him with a bump before simply shooting over him. Drummond saw an uncontested floater because Theis knew he had no chance of blocking it. Embiid did unicorn stuff.

Sure, not many guys can defend Embiid so we must take this with a grain of salt. Still, it is fair to worry about this lack of size could impact the Celtics if they run into a tough matchup in the playoffs.

Perhaps during this time next year, I will write about Theis’ improvement as a 3-point shooter. As of now, he is streaky and not too reliable but, everyone can see the positive development.

Of course, I could have dedicated some words to his well-noted box out technique for screen assists. I figured we all knew about that by now.

It really will be a shame if this season is cut short for Theis. He was beginning to build a legitimate case for All-Defensive Team consideration. Plus, his shot was on the rise. The center is still young, however, and better days are surely ahead.