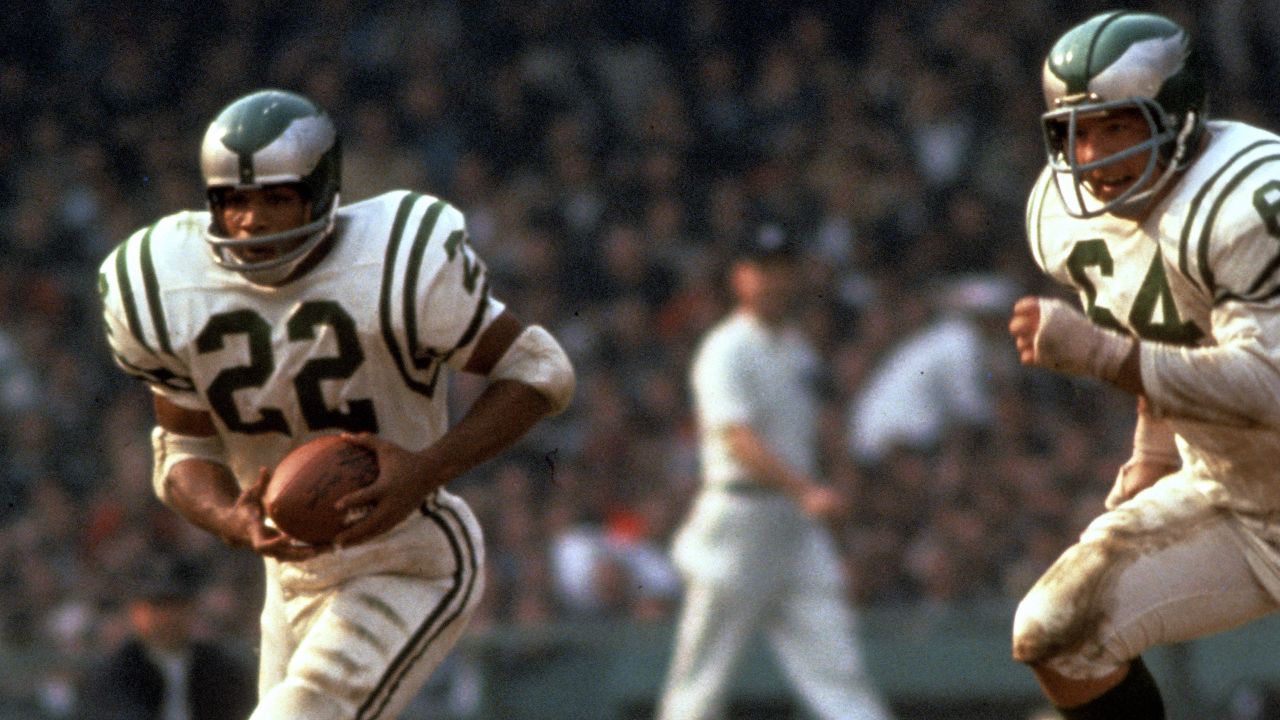 Life goes on whether the COVID-19 thing wants to stop it or not… Sadly, one of our favorite all-time Eagles died this week of COVID-related causes, kicker Tom Dempsey at age 73. Another, all-purpose back Timmy Brown, passed away from unrelated causes at age 82.

It makes you appreciate the relatively short time we all have on this planet to make our mark.

The Timmy Brown death hit me harder than the Dempsey tragedy, partly because Dempsey was through no fault of his own a great guy who fell outside of my Topps football card collecting obsession. In other words, Timmy Brown was THE Eagles football card every kid in my neighborhood coveted back in 1963 when I was a jerky little kid spending every nickel on trading cards.

Brown died Saturday at the age of 82. He was living with his son Sean in Southern California. The two made the trip to Philadelphia in 2015 when Timmy was inducted into the Philadelphia Sports Hall of Fame. Sean helped his ailing father finish his acceptance speech, a touching moment that moved many in the audience to tears.

“Timmy was a Gale Sayers-type back,” said Pete Retzlaff, the Eagles Hall of Fame tight end. “He was very quick with a knack for finding daylight. He had great hands. He would be sensational in today’s game. Spread the offense, throw him the ball and watch him go.”

It didn’t exactly come easy, either.

“It was a slow process, convincing people I belonged in the NFL,” Brown said. “When I finally got to show what I could do, their reaction was, ‘Gee, what a surprise.’ That’s the price you pay for coming out of a small college and going late in the draft. You get labeled as a fringe player.”

Brown earned a spot on the 1960 Eagles championship team as a kick returner and soon developed into one of the NFL’s most dynamic offensive players. He led the league in all-purpose yardage in 1962 and ’63. He had 2,425 combined yards in 1963 (rushing, receiving, and kick returns), a remarkable feat considering it was a 14-game regular season and the Eagles were a hapless 2-10-2 team.

Born in Knightstown, Indiana, Brown grew up in an orphanage with his brother, John. He earned a partial athletic scholarship to Ball State and was a 27th-round draft pick of the Green Bay Packers. He was cut by coach Vince Lombardi after playing just one game. Fortunately for all of us the Eagles picked him up for their practice squad, and activated him in 1960.

He of course went on to become the most coveted football card in the Eagles Topps set back then, and the main reason I and many kids tuned into the TV games back in the early-to-mid ’60’s — what would this young man do next?

AS FOR THE PRESENT SITUATION, I don’t know what to tell you. We may or may not have an actual NFL season in 2020.

The Draft will go as scheduled but in a virtual presentation from April 23-25. So the MACH 10 Draft Challenge is open for entries. So far we have ballots from Boner, South Philly Ben, and Don Pardo.

This is the time of the year we usually feature Daniel Jeremiah’s mock draft for Round 1 from NFL.com. Maybe it will help you sort out your first round priorities, maybe not. But here it is:

“With the 2020 NFL Draft a little more than two weeks away, here’s my third look at how teams will draft when Round 1 begins on April 23.

I’m sure there will be several teams interested in trading up for Burrow, but I can’t see the Bengals passing up the opportunity to land their top QB.

I understand the Redskins already have depth on the defensive line, but Young is too good to pass up.

Okudah is the premier player at his position in this draft and fills a massive need on the Lions‘ defense.

The Giants have needs all over their defense, but I still believe protecting Daniel Jones is the top priority.

I have Tua Tagovailoa rated higher than Herbert, but I think there’s a legitimate chance the Oregon QB goes ahead of Tua.

The Chargers have a talented roster and now they have a point guard to distribute the ball for the next decade-plus.

The Panthers have a bunch of intriguing options with the seventh pick. I wouldn’t rule out a trade down from this spot, either.

The Cardinals addressed the WR position with the acquisition of DeAndre Hopkins. Wills would slide right into the RT spot, opposite D.J. Humphries.

The Jaguars have a multitude of needs on defense, but this pick helps them upgrade two spots. Becton takes over at LT and Cam Robinson slides inside to guard.

The Browns need another offensive tackle, but Simmons might be too good to bypass. He is the perfect defender to match up with the division’s most dangerous playmaker, Lamar Jackson.

The Jets need to continue to upgrade the O-line, but they must weigh taking the fourth-best OT versus the top wideout. Sam Darnold needs some dynamic players around him.

This decision would likely come down to Jeudy versus Javon Kinlaw. I would applaud either choice.

Let’s take a minute and just imagine Ruggs in the hands of a creative play-caller like Kyle Shanahan.

The Bucs are all in on Tom Brady. Adding some protection for him is a good idea.

The Broncos could go receiver here, but they also have a need on the D-line. Kinlaw has unlimited potential.

The Falcons have plenty of firepower on offense, but the secondary needs help. Henderson has the greatest upside of any cornerback in the draft class.

Chaisson would be an ideal fit on the opposite side of Demarcus Lawrence. He is still a little raw, but he’s very explosive.

Gross-Matos would give the Dolphins some much-needed edge rush. The more I studied him, the more I liked him.

Terrell would reunite with his college teammate, Trayvon Mullen, to give the Raiders two tall, long and rangy CBs to build their secondary around.

Jefferson has outstanding hands and route polish. He excels on third down and in the red zone.

The Eagles need to add receivers, but they can afford to wait a round or two. Murray would give them a dynamic playmaker in the middle of their defense.

Johnson is rock solid on tape and he has the tools to fit perfectly in the Vikings‘ scheme.

The Patriots love size and power on the edges. Epenesa isn’t an elite tester, but he’s a very productive football player.

The Saints don’t have many glaring needs. They can afford to simply take the best player available.

Higgins would bring some size and red-zone ability to the Vikings‘ offense.

The Dolphins must address the offensive line in this draft. I could see them doubling up in the next round.

Jackson was very up and down last season, but he’s an outstanding athlete. He should continue to improve as a pro.

The Ravens need more edge rush. Baun has the athleticism to drop and cover, as well.

I love Aiyuk’s game and his toughness would fit the culture in Tennessee.

It’s tough to find the right spot for Love. He could go in the top 10 or fall to this neighborhood of the draft. The Packers would be a great fit for him to sit, learn and develop.

The 49ers will likely trade down to stockpile selections, as they currently don’t hold a pick in Rounds 2-4.

The Chiefs could have their choice of the top running backs, but they also need to get younger/better along the interior of their offensive line.