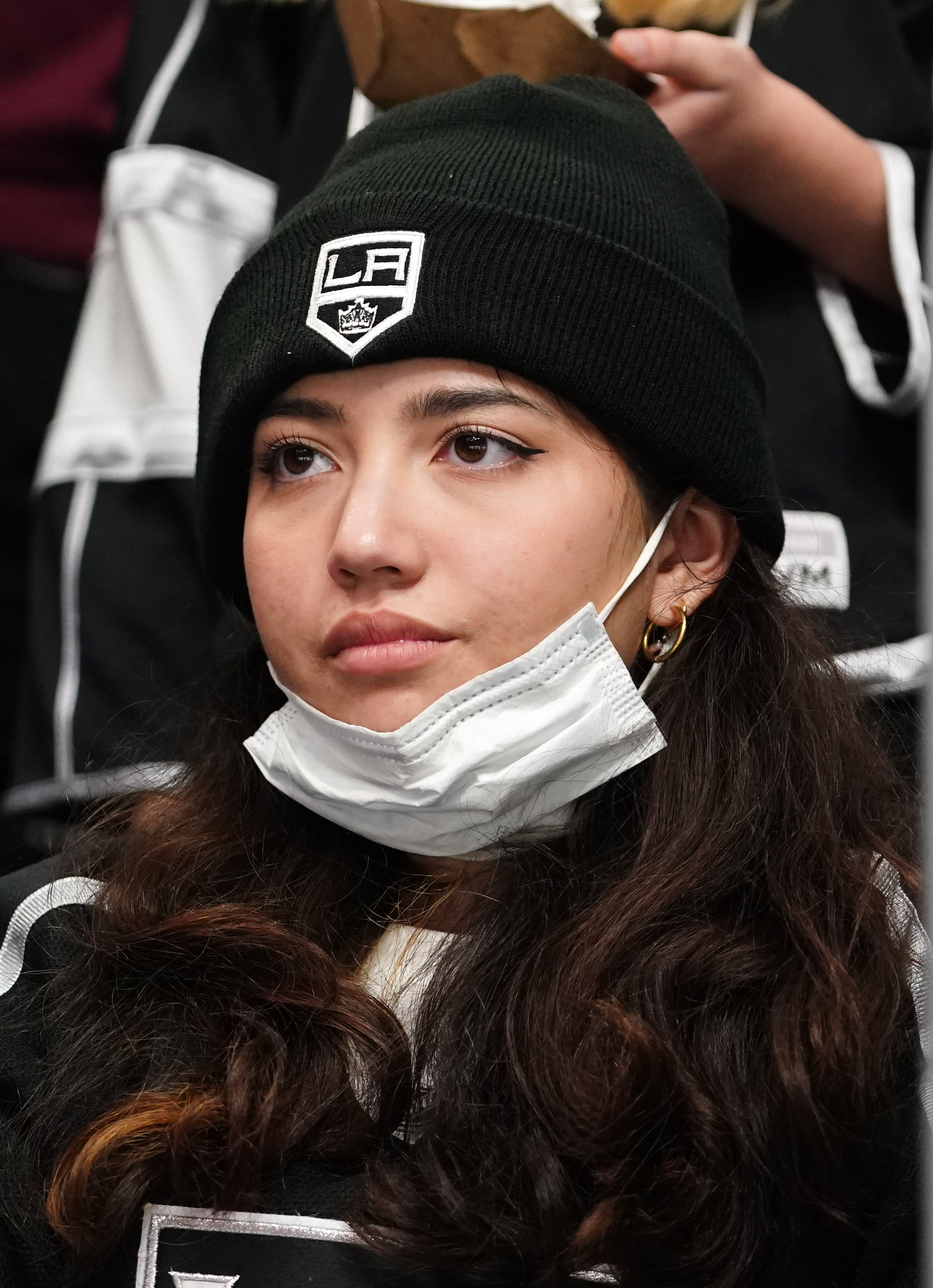 March 18th, 2002, was like nearly every other day around the NHL.  Fans eagerly made their way to the arenas to watch their favorite teams.  Some teams were battling for playoff position while others were just kind of waiting for the season to come to a merciful end.  The latter was certainly true for expansion teams like the Minnesota Wild and the Columbus Blue Jackets.  With all due respect to the Vegas Golden Knights, being an expansion team usually meant you had to be cannon fodder for the rest of the league for your first 4-5 seasons as you tried to slowly build yourself into playoff contender.  The Wild would finish the 2001-02 season with 26 wins and 73 points, the Blue Jackets only had 22 wins and 57 points in what would be their franchise’s worst season in a non-lockout year.

But of course, that’s not why I’m talking about this date.  On this date, a family from West Alexandria, Ohio was treating their soon-to-be 14 year old daughter (and avid sports fan) to an early birthday gift by attending a Blue Jackets’ game against Calgary.  About halfway through the 2nd period, a point shot by the Flames’ Derek Morris was deflected up over the glass by the Blue Jackets’ Espen Knutsen where it struck 13-year old Brittanie Cecil in the head near her left temple.  Even though the puck had fractured her skull she walked to a first-aid station at Nationwide Arena and was taken to the hospital mostly as a precautionary measure.  Unfortunately, the doctors didn’t realize (despite the use of a CT scan) that her injury was far more severe than just a gash to the head as she had torn the vertebral artery which eventually caused her brain to swell where she developed a fever and caused her to lose consciousness.  She would die 48-hours later after being struck.

It had to be an nightmare of an experience for Brittanie’s family and NHL teams soon put up tall nets at the ends of the ice as did other leagues in North America.  It was a common sense and logical reaction to an awful tragedy and a legitimate attempt to prevent incidents like that from happening again.  Soon after the put up nets along the ends of the ice, some fans complained saying the nets obstructed their view and demanded they be taken down or they would cancel their season tickets.  Ultimately those complaints were ignored by the NHL for the greater good and the nets have remained in arenas to the present day.

In the continuing wake of the COVID-19 crisis which has put the entire sports world in a state of suspended animation and given us all a ‘new normal’ to deal with, leagues like the NHL and MLB have begun to explore the idea of playing their games in states where the virus has been less virulent.  For the NHL, they have looked at North Dakota as a possible site to play games, a state with just 5 deaths relating to COVID-19 so far at the time of this writing.  Maybe its just me, but isn’t hearing plans like this a lot like listening to those fans that complained of the nets after Cecil’s tragic death and demanding that they take those nets down?  Isn’t it kind of ignorant to the pleas of the medical community who still insist we really are still towards the beginning of this worldwide dilemma?

I understand why the league wants to continue it’s season, but it seems highly unlikely, even if games are played in North Dakota that fans would be allowed to attend the games anyways.  Some point out that the fact the Olympics is postponing itself for a year as a window of opportunity to put on events later in the summer which would be TV slots normally dedicated towards showing Olympic events.  Think about that logic for a moment.  The biggest sports event on the planet postponed itself for an entire year because of the seriousness of the outbreak, but a professional sports league thinks, “hey, this is our window of opportunity to start playing again?!”  Does that make any sense at all?

So why risk it, at all?  While those games may generate some TV revenue and higher TV ratings due a sports-starved audience, it certainly would not generate the kind of money that would offset the financial losses teams have already incurred.  While fans probably would enjoy the chance to watch some live sports from home, should players be compelled to risk their health and safety for our entertainment?  I realize some NHL’ers are hoping to avoid having their pay tagged by escrow payments but is it worth it to put your health and that of others in jeopardy so you can make $6 million instead of $4 million?  Besides, if these games will be played without fans I can’t see the games themselves will generate much revenue to alleviate their escrow concerns.  Putting games back on TV won’t bring money to the thousands of folks laid off that worked at the arenas selling concessions or as ushers or those selling tickets.  So again, why risk it?

Yes, injuries happen in sports, but most of those injuries come in the line of the game play itself.  Athletes should not be forced or compelled to be exposed to a possibly fatal contagion and I wouldn’t blame any athlete for refusing to play under such conditions.  As the Athletic‘s Michael Russo pointed out in his recent mailbag article, for the hundreds of NHL’ers who left for Europe upon the suspension of the season the entanglements to get them back to North America to play seems pretty impractical and if the league wanted an ‘easy out’ to just say the 2019-20 season is canceled outright this would be it.

But so far they’re continuing to discuss formats whether there is a play in to determine the final few teams or just taking the standings as where they currently stand and finishing the season in some time in July or even August.  Why?  Just stop.  The season needs to just come to an end so people can move on and focus on staying healthy and safe.  For those that are saying the league needs to have a Stanley Cup champion, does it?

In 1919, as the world was still finalizing the Treaty of Versailles to officially end World War I, when the ‘Spanish Flu’ epidemic swept across the world and killed 50 million people over the course of a year.  Even after 4 years spent participating in the largest conflict in human history to that point, medical facilities were quickly overwhelmed with patients and soon they converted gyms and auditoriums into makeshift hospitals.  Sound familiar?

But because so little was known about this disease, they didn’t realize the importance of social distancing so the disease continued to spread in a seemingly unpredictable fashion.  But people kept trying to deny this new normal and living their lives as if the disease wasn’t there until it finally hit the hockey world in the Stanley Cup that year between the Montreal Canadiens and the Seattle Metropolitans.

Both clubs had top notch talent with the Canadiens having 5 Hall of Famers most notably Newsy Lalonde and the Metropolitans 3 Hall of Famers on their rosters.  It was a spirited series, and the Canadiens seemed to be on the verge of a comeback after winning Game 5 of the series.  It was here that the flu would make its mark on the series and professional sports history.

In the days leading up to Game 6, five Montreal players and head coach George Kennedy came down with the flu.  Feeling compelled to have the game go on, the Canadiens tried to add some players from Victoria in nearby British Columbia to finish out the series but the league would not allow it.  The series was permanently suspended and four days after that, Canadiens’ defenseman Joe Hall died of the flu so no Cup was awarded in 1919.  Author Kevin Ticen wrote a book called When it Mattered Most about Seattle’s hockey glory years.

“(A few) weeks ago, I didn’t think that would ever happen again. It was just such a quirky little footnote in history, and it was a funny little story, and a ‘I can’t believe this happened’, and now we’re sitting here and history has repeated itself.  I mean, to me, it’s exactly the same.” ~ Author Kevin Ticen

Does the NHL want to risk going through this all over again?  I really hope not, because its not worth it.  Like the Cecil tragedy, it was terrible but it brought a common sense change to help make the game safer for those in attendance to watch it.  The reason the medical community was calling for social distancing so early in our current crisis, was because of that experience nearly a hundred years ago.  During that previous epidemic realized that social distancing was an effective deterrent to the spread of the flu.  That’s what they learned from it, albeit the hard way.  We all need to do our part and its time the NHL does its part; for the safety of everyone involved.

The NHL would be wise follow that same precaution as this Sports Illustrated article suggests.  Do cities struggling to have enough beds for patients want to set aside a portion of their facility to be ready for a possible hockey injury in the middle of a pandemic?  Do we need to take an EMT crew or two and put them in quarantine to be on standby at NHL games?  And for what, to play games with no fans?  What’s the point, to avoid having to explain to people why the league had a season without a championship in 2019-20?  Is it that shameful to say they put the safety of others over awarding their trophy one year?

We do not need fans, players, coaches to die to convince the league to do the right thing and just call it off.  Josef Stalin once said, “A single death is a tragedy, a million deaths is a statistic.”  The league should not want to do anything that may add to the awful statistics we continue to see climbing each day.

It’s just not worth it.