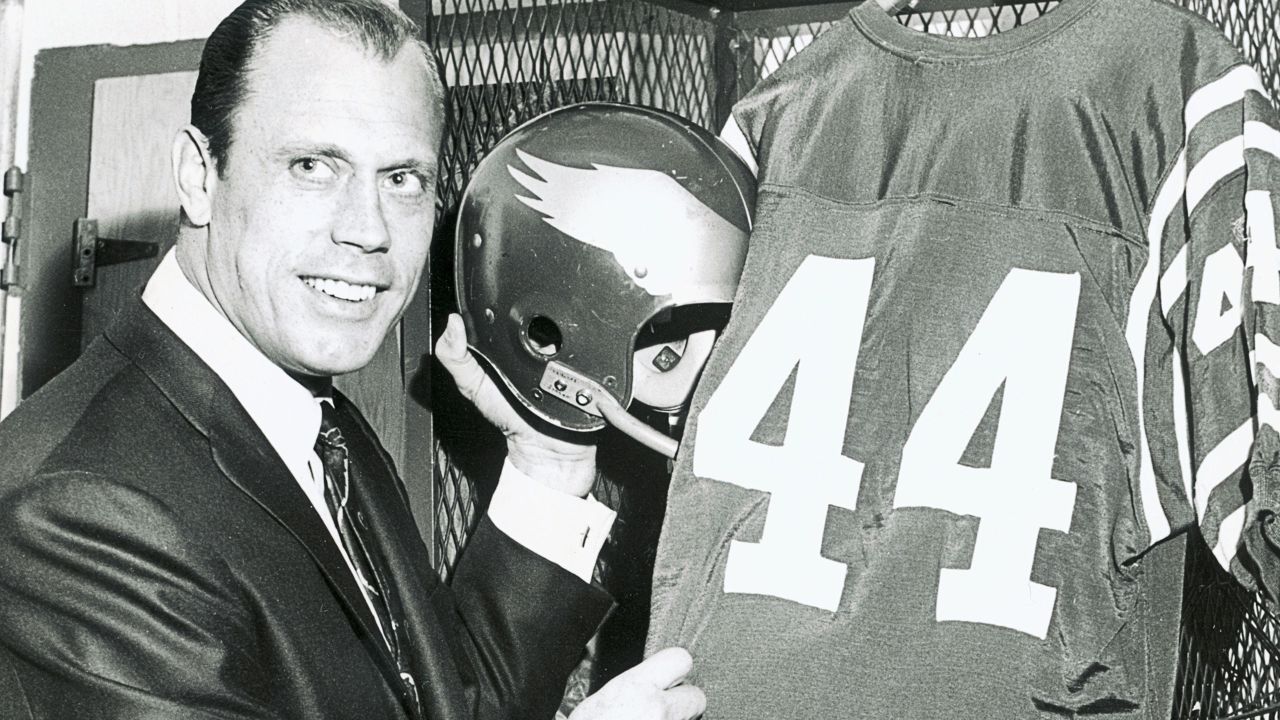 Another boyhood hero of mine and possibly yours is gone.

This one was real special to me. The Retzlaff family lived not far from me growing up. Pete was a young dad and family man. We all knew he was a good football player, but we were equally in awe of him as a TV-Radio spokesperson for the Conte Luna pasta company.

The guy was essentially the prototype for Zach Ertz back in the day. Actually, he was the descendant of tight end/fullback methodology in the Pete Pihos/Bobby Walston evolutionary tree of receivers so unique to the Eagles’ offense at the midway point of the 20th century.

In fact, as a former collegiate fullback, Retzlaff showed perhaps the greatest yards-after-catch ability for a tight end we have ever seen in Eagles history.

Pete was gifted beyond mere football ability. He had the most musically perfect baritone announcing voice I’ve ever heard.

Handsome in a Nordic way, broad-shouldered and confident, he was a natural in front of a camera or a microphone. Local sponsors didn’t take long to figure out this guy could deliver a commercial message.

The Conte Luna company out of Norristown, Pa., signed him to a steady deal to plug their pasta products. Later on the company was renamed the Philadelphia Macaroni Company, with a raw ingredients supply factory located in Minot, North Dakota— not far from where Pete grew up.

I don’t know if you can dig up a Conte Luna audio of one of Pete’s commercials from the ’60’s, but if you can, you will be amazed by the dulcimer tones of his broadcasting presentation.

This kind of media exposure was a big deal to the pro athlete in the ’50’s and ’60’s, mainly because it supplemented what used to be a basically low-paying day job. Retzlaff earned $5000 in 1959 playing football, for example, but made another $3000 doing commercials for Conte Luna.

When you were raising a family in Philly in 1959, that was a big deal and a huge supplement.

Today a young Pete would probably be coming off the last year of a $9 million contract and preparing for a $1.5 million entry level commentator gig with CBS-TV.

Oh he did okay enough back in the day. It all started when he was drafted #265 overall by the Detroit Lions in 1953 out of South Dakota State. At 6-1, 211, the Lions had no use for him as a third-string fullback. Plus he had never caught a single pass in college.  He was released during camp and then decided to serve his two-years tour of duty in the Army.

Ray Diddy actually knew the man. He will tell you the rest of the story.

In 1956, Eagles GM Vince McNally claimed Retzlaff off waivers after he was cut again by the Lions. The Eagles paid $100 for his rights.

All Retzlaff did then was play 11 seasons in Philadelphia, earn five trips to the Pro Bowl, set the club records for pass receptions and receiving yards, and help the Eagles win the NFL Championship in 1960. It was quite a return on such a modest investment.

Retzlaff finished his career with 452 receptions for 7,412 yards, a 16.4-yard average, and 47 touchdowns. He tied Baltimore’s Raymond Berry for the NFL lead with 56 receptions in 1958. He broke into the league as a fullback but he moved to split end with the Eagles and played his last four seasons at tight end.

Retzlaff’s career took off in 1958 when the Eagles acquired quarterback Norm Van Brocklin in a trade with the Los Angeles Rams. At the time, the 6-1, 215-pound Retzlaff was splitting time between the backfield and the line. Van Brocklin saw him on the practice field one day and told the coaches to put him at split end.

“The Dutchman (Van Brocklin) said I ran patterns like Elroy Hirsch, who was his favorite receiver with the Rams,” Retzlaff said. “That boosted my confidence tremendously. Elroy Hirsch was one of my idols. I loved to watch him play. I thought, ‘If the Dutchman said that, I guess I must be OK.'”

In 1960, the Eagles won the championship with an offense almost entirely built around the forward pass. Retzlaff led the team with 46 receptions for an 18.0-yard average and five touchdowns. Pro Football Hall of Famer Tommy McDonald had 13 touchdowns on 39 receptions. Tight end Bobby Walston had 30 catches but averaged 18.8 yards per reception.

The Eagles defeated Vince Lombardi’s Green Bay Packers in the title game that season, 17-13, and Van Brocklin was named the league’s Most Valuable Player. Van Brocklin retired after that season but Sonny Jurgensen, another future Hall of Famer, took over at quarterback and the offense kept rolling.

“Pete was a great technician,” said teammate and fellow Eagles Hall of Famer Tom Brookshier. “He worked for hours on running patterns, getting every step exactly right. When you watched Pete on the field, it was like watching the (play) diagram come to life. He was so disciplined in his routes, that’s why quarterbacks loved to throw the ball to him.”

Brookshier was the one who nicknamed Retzlaff “The Baron.” The players toured an Army base one day and they were given the chance to test their skill on the firing range. Retzlaff, who was a lieutenant in the Army prior to playing pro football, fired nine bull’s-eyes on nine shots. Brookshier decided the blonde-haired Retzlaff looked like a German marksman.

“He looked like a Baron Von Somebody,” Brookshier said.

So Retzlaff became “The Baron” to his teammates and Eagles fans. He was also dubbed “Pistol Pete” by Bill Campbell, who called the games on radio and television. Campbell once described Retzlaff as “a quiet, unassuming guy who possesses the body of a weightlifter and the intense desire of a starving man.”

Retzlaff was born in the tiny town of Ellendale, North Dakota. He went to South Dakota State where he was an all-conference fullback and also starred on the track-and-field team where he threw the shot put and discus. The Lions selected him in the 22nd round of the 1953 draft but the Lions were the defending NFL Champions that year, so they didn’t have a spot for a kid from the Dakotas.

Detroit put Retzlaff on waivers and the Eagles claimed him. They waited out his military commitment, brought him to camp, changed his position, and found one of the great players in franchise history.

Retzlaff’s best season was 1965 when he caught 66 passes for 1,190 yards, an 18.0-yard average, and a career-high 10 touchdowns. He was named NFL Player of the Year by the Maxwell Football Club, the only tight end ever to earn that honor, and the Washington Touchdown Club. He also won the Wanamaker Award that year as the outstanding athlete in Philadelphia.

Berry, a future Hall of Famer, called Retzlaff’s 1965 season “arguably the best season a tight end ever had.” Berry made a film reel of Retzlaff’s season so he could study his moves and improve his own pattern running. What no one knew was Retzlaff played that entire season with a heel injury that kept him from practicing. He would rest the foot all week then take three shots of Novocain on Sunday so he could play in the game.

He played one more season and then retired. At the time, he held the Eagles’ records for career catches and receiving yards, both records currently held by Harold Carmichael, who will be inducted into the Pro Football Hall of Fame this year. The team honored Retzlaff by retiring his jersey number 44.

Off the field, Retzlaff helped establish the NFL Players Association and twice served as its president. He stood up to the owners at a time when it was still considered risky business to do so.

After hanging up his cleats, Retzlaff spent two years as a full-time sportscaster for WIP Radio and WCAU-TV. When Leonard Tose bought the Eagles in 1969, one of his first acts was to hire Retzlaff as the team’s general manager. Retzlaff drafted Carmichael in 1971. He was in that position for four years before moving onto private business. He kept his home in suburban Gilbertsville, Pennsylvania.

There were many glowing tributes written about Retzlaff but perhaps the best is the one written by Sandy Grady of the Philadelphia Bulletin on the occasion of Retzlaff’s retirement. Grady wrote:

“The mind’s lens sees Retzlaff crouching then fighting out of the linebacker’s grasp, then the No. 44 shirt tilting downfield, shoulders bulldog-low. There is a head bob, a foot planted to the outside freezing a cornerback for an instant and Pete careening into the middle, snatching a ball in the mob’s flurry then knocking down people like bowling pins.”

Oh yes, he was not only the best YAC guy I ever saw as a kid, but also the first tight end I ever saw run a post pattern. Pete was just a joy to root for. And to me, his beautiful voice in the Conte Luna commercials was especially soothing in what were turbulent times in the ’60’s.