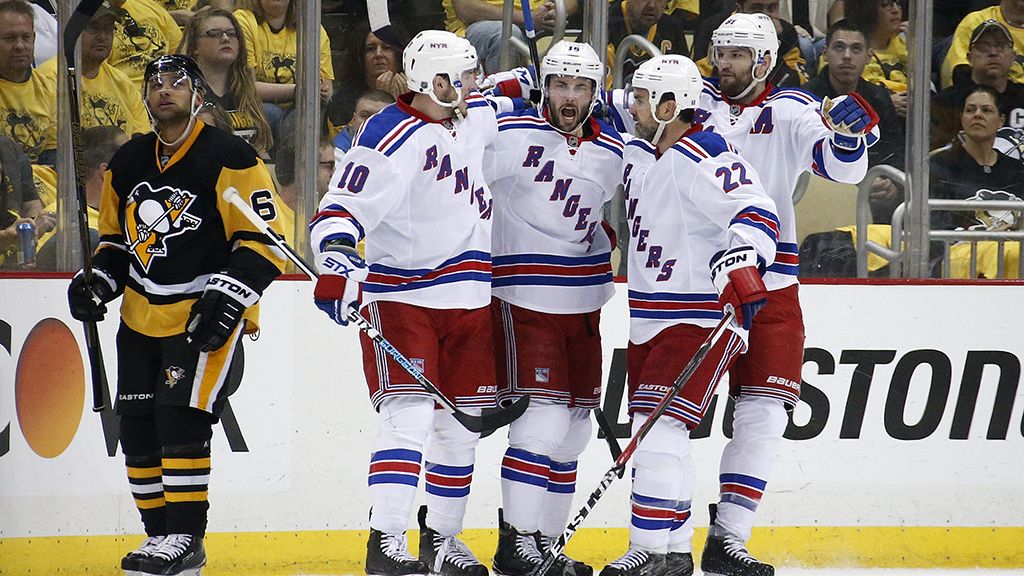 You knew this wasn’t going to be easy, no playoff round is.

Even the sweeps have moments of doubt and struggle. We do have to remember that while this may not be the same Rangers team that’s coming off an appearance in the Final in 2014, they’re still a pretty solid team.

Solid enough to keep up with a fast and hungry Penguins team that’s getting healthy? Time will tell.

A big second period and some of the magic of Zatkoff wearing off gave the Rangers all they needed to even this up before we head up to Manhattan for games three and four.

You’d hope Geno’s return would be an emotional lift to the club in the way rallying around JEFF! was in game one but no such luck.

Buckle up, we’re coming back to CONSOL Energy Center for at least one more this series.

Heeeeeeeeeee’s back…The Russian Bear, with rumors swirling he was close, made his 2016 Stanley Cup Playoff debut.

Same goalies and tandems as game one; Zatkoff with Jarry backing up, Hank with Raanta backing up.

Malkin in, Schultz out. With all the bodies available, this is fine. Schultz was serviceable albeit in sheltered minutes and situations but a bottom pairing of Cole-Lovejoy doesn’t need babysat quite as much.

Let’s be real, the way Hagelin-Bonino-Kessel played down the stretch, that’s the second line until, assuming he does, Malkin gets back in the groove. Honestly, it’s probably the first line but far be it from me to say Sidney Crosby is a second-line center…

Guessing Lundqvist’s eye injury wasn’t as bad as he sold it or he got over it pretty quickly…baby.

Chance to take a stranglehold on the series on home ice. Let’s ride.

Through the first couple minutes, the slog was on.

The Rangers seemed to get the message from the third period of game one that going blow for blow with this Pens team will not be fruitful for them. They sat back, waited, and played well defensively.

The Pens were willing to open it up a bit but in the defensive zone they were completely accountable, similar to game one, making sure Zatkoff wasn’t seeing many second chances.

About three and a half minutes in, Malkin-Letang-Sheary found themselves on a 3-on-1 where Geno and Letang made a couple of passes but Hank tracked it the whole way.

A minute later, the Rangers found themselves with a golden opportunity. Jesper Fast came down the wall with Eric Staal streaking. Daley had him well-covered but Staal had the foresight to pull-up and find open space.

If you thought the Zatkoff magic ended with game one, well, it carried over at least into the first period of game two.

Stepan blocks a shot from Letang and he’s off to the races, one-on-one with Zatkoff. Ice in his veins, Zatkoff stares him down and makes the stop.

The Penguins would get a late power-play chance with a couple of good looks but no goal.

Hornqvist and Zuccarello got tangled up and the period ended with no score.

Not the best start, you can’t complain when you’re scoreless but the Pens had several odd-man rushes and didn’t capitalize. Has to change.

Starting the period playing some 4-on-4 and the Penguins were snoozing off the opening faceoff.

So, we had a little JEFF! magic to start the period:

If you have been excited about the emergence of the young guns from Wilkes-Barre as I have, the penalty Conor Sheary draws on Zuccarello was a perfect example for that excitement.

He uses his speed to gain the zone, is about to use it to break away and forces a slower opposition to hook him up.

The Penguins would breakthrough on this one…just sit back and enjoy.

Could you imagine the teams of the past two seasons doing that? I know sure as hell couldn’t.

Great awareness by both Bonino and Daley to see this play develop. Bonino pulls up to keep possession rather than blindly throw a low-percentage chance at the net, works it to Daley, Daley knows he has Phil coming and tic-tac-toe.

Hank wanted to jump up and get pissed but he knew. He knew good and goddamn well he had no chance.

That goal should’ve been the catalyst to the Penguins rolling, unfortunately, it wasn’t. You can’t say the Penguins collapsed because a 1-0 lead is far from dominating. You also can’t say that the Rangers took over when in reality they had a really, really good four minutes.

However, unlike the Kessel power-play goal, the Rangers’ first tally was the spark they needed.

Off of a faceoff, JT Miller tries to work the puck to Nash in front but it skips off of a mess of bodies including Cullen’s skate, Daley’s stick, and god knows what else, but lands right on a streaking Yandle’s stick. Zatkoff can’t track it and we’re even.

Not 20 seconds later, the Rangers took the lead.

Nash flips an innocent cross-ice pass in the direction of Brassard and it should be an easy play for Maatta but sometimes the hockey gods have a different plan. The puck skips over his stick right to Brassard and he just skates right in on Zatkoff. Blocker side.

Honestly, not the worst call. Use the challenge as your timeout that you’re gonna lose. In for a penny, in for a pound.

Bryan Rust out of the box after a penalty, looking for his first playoff goal, clean breakaway on Hank, no dice.

Moments later, the Rangers pulled away.

A failed clear by Daley gave the Rangers full possession. Zuccarello clears the puck to the weak side of the ice with Miller streaking in. Miller, makes the pass of his life to Zucarello back across the ice and Zatkoff has absolutely no chance.

A late power-play wouldn’t bring much for our Guinos. They would threaten, but never seriously.

20 minutes to and a two-goal deficit.

A series of bad puck management, turnovers, and other problems would give the Rangers a three-goal lead.

An absolutely putrid turnover by Dumuolin gives the puck to Krieder who makes no mistake over the glove of Zatkoff.

Save for Phil Kessel’s power-play goal, the third period was goddamn unwatchable.

No flow, no action, the Rangers were content to shut it down.

Bonino and Kessel, man. They got something going.

See you at MSG.