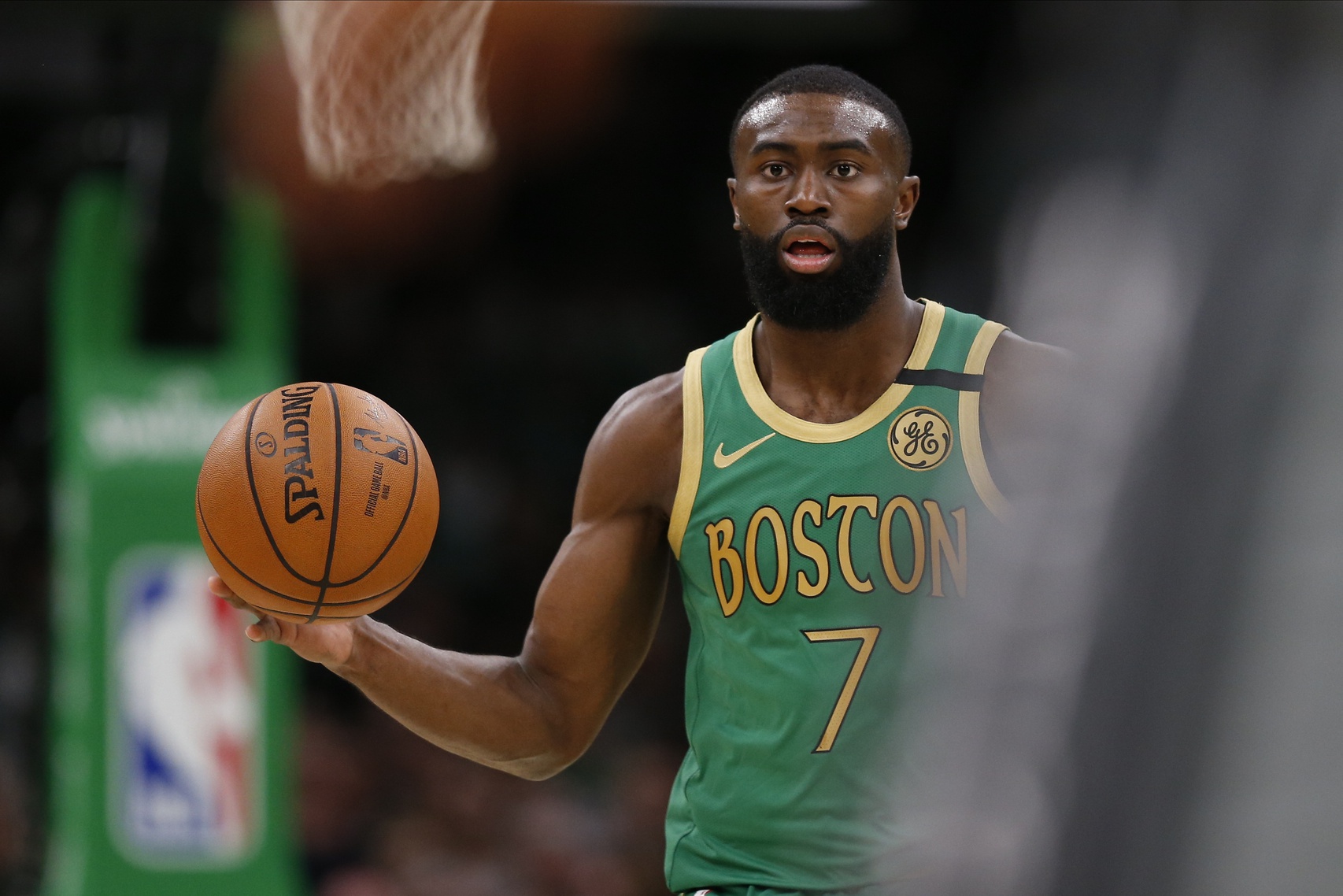 With two previous posts about Romeo Langford and Daniel Theis already completed, it has come time to turn our attention Jaylen Brown. The ascent of Jayson Tatum to the cusp of superstardom may have overshadowed Brown’s own rise. Like a parent who just realized they have been neglecting their middle child, it is time to give Jaylen his own shine.

Offensively, the second half of the J team made significant strides this year. His maturation into a three level scorer will be detailed but, why not start you off with a tasty statistical treat. In the history of the NBA, only six players have ever achieved the following in a single season: shoot over 48 percent from the field and at least 38 percent from deep while taking at least 5 3-pointers per game and 15 total field goals as well.

Take a second to breath in those qualifiers. Still a bit foggy? Visual help is on the way. The list below features two MVP winners and a combined amount of  All-Star appearances that I don’t have the time to count (and considering we’re all quarantined, that’s saying something.) You might just notice that Jaylen is the youngest player to make this list, too.

So, how did Brown wind up becoming so effective as a shooter on a large amount of field goal attempts? Specifically, he found comfort in a role that became more outlined for him this season. He knew exactly when to either provide spacing in the corner or create for himself. And it just so happens that his greatest strength that helped him achieve the latter was, well, strength.

Realizing How To Use Your Freakish Physical Gifts

In times past, it was easy to grow frustrated when Jaylen missed what seemed to be high percentage chances. We’ve all yelled, “you’re stronger than everyone, go to the hole!” at least once to our TV while watching him. This season, however, those screams happened less frequently.

According to Cleaning the Glass, Brown’s percentage of shot attempts at the rim went down but, he has become a better finisher once there. One of the reasons for this is the ability to recognize when he can bully players. Here, he bodies Donovan Mitchell all the way under the basket. Watch Mitchell frantically try to match Brown’s strength in a losing effort.

Jaylen can do this to players other than tinier guards, however. The next play is almost an exact replica except he’s bullying the 6-foot-8 (albeit much skinnier) Justin Jackson this time.

But Brown can make bigs look weak as well. Despite having more than 20 pounds and 5 inches on Jaylen, Damian Jones gets hip checked out of the way before he surrenders an at-rim two.

The best example of Brown realizing when to deploy his strength as a weapon comes against Jalen Brunson and the Mavericks. Although they’re not Carsen-esque, his tree trunk legs get position on Brunson. Then, Brown bumps him out of the way before merely shooting over him. The synchronization of Jaylen’s hoops IQ with his physical gifts has been much of the reason why he grew into a borderline All-Star. His promising shot creation is another.

Creating His Own Offense

The only thing more impressive than the steady rise in JB’s field goal percentages is the rise in the amount of field goals he made that went unassisted. Sure, we all love brilliant ball movement that results in easy buckets. Yet, the difference between being a fringe All-Star or a possible All-NBA player often hinges on the ability to create your own shot. To see an upward trend in this area bodes well for Brown’s trajectory.

To be fair, Jaylen has not reached Tatum’s level of success in this area. But Brown is beginning this development from a different proverbial square one. The signs he has shown so far this year are encouraging to say the least. This is the first time in his career he is taking any meaningful amount of pull-up jumpers. In fact, he is currently fourth on the team in pull-ups per game and second in field goal percentage within that group of four. The tape tells the tale of his progression.

Remember when Brown’s handle was a concern? Well, although it isn’t perfected, it has gotten to the point where he can create separation. When paired with a shot release that looks higher than ever before, Jaylen’s off-the-dribble game is bound for sustained success.

Again, we see the theme of Jaylen getting comfortable using his intellect in the game. While leading a second unit against the Clippers, he took on one of the game’s best defenders in Paul George. He beats him to his spot with some purposeful ballhandling and does so before the defense is set. This is confident, assertive basketball is hopefully a harbinger of things to come.

We have also seen some truly elite shot-creating moves from Brown. In fact, much of it came as a present during the Christmas Day game against Toronto. Brad Stevens’ double drag play is already a nightmare for opposing defenses. It is typically ran by Kemba Walker, Marcus Smart or Jayson Tatum, however. If Brown can solidify his shot-creation, then this play could become even deadlier when teams have to prepare for that and to his rim attacking.

Using Strength On The Defensive End

I could go into depth more about Brown’s offensive growth, especially when considering his 3-point shooting. But fans likely know that story by now. They also know that Brown received a single All-Defensive team vote last year and maybe deserved more. He still has to learn to stay disciplined on defense but, Jaylen’s core strength allows for him to defend some of the league’s stars and do so adequately.

Despite giving up over 20 pounds to Al Horford, Jaylen actually bumps him further away from the hoop. It forces the ball out of the paint and to Joel Embiid. Watch Jaylen beautifully time a steal that Embiid didn’t see coming. Having a wing who can defend bigger fours is a luxury and Brown shows that often,

How many wings can make a switch this smoothly onto a 7-footer and dislodge him to snag the steal?

My favorite defensive highlight this season from Brown came against LeBron James. Jaylen drew that tough assignment down the stretch of a tight away game. James gains ground on Brown but he never gets him off balanced. Jaylen stays disciplined before letting his length do the work.

Blocking one former MVP not enough for you? Jaylen did it once more versus Russell Westbrook and his bulldogian driving approach.

Yet, Jaylen can still be undisciplined at times. There are moments when he plays too aggressively. It is seen when he commits silly reach in fouls or falls for pump fakes. Consider his defense on JJ Redick. Redick is unlikely to drive past him or pull up for a midrange shot over the taller Brown. Why is Jaylen playing him so tightly? It leads to fouling after falling for a pump fake; something he has not been able to curtail in his career so far.

An Area To Improve?

Some may suggest that Brown needs to work on facilitating for others. Is this his role, however? Brown hit just over 47 percent of his corner 3-pointers this year. In fact, he had an effective field goal percentage of 62.4 on all catch and shoot attempts. For his career, Brown has never had an assist to usage ratio higher than 21st percentile. The Celtics just don’t want him to be too responsible for creating for others.

Instead, I would rather have Brown improve in his ability to shoot off of screens. The Celtics do not use him often on pin downs but he could be an awesome threat in theory. His height and lift allow him to shoot over defenders. Learning to effectively run around picks is a desirable next step. You can see him sink one here although it rattles in and Brown looks a bit off kilter.

Expect Jaylen to keep adding to his game. His work ethic is already known to fans. If he stays aggressive and healthy, his first All-Star appearance could happen as early as next year.