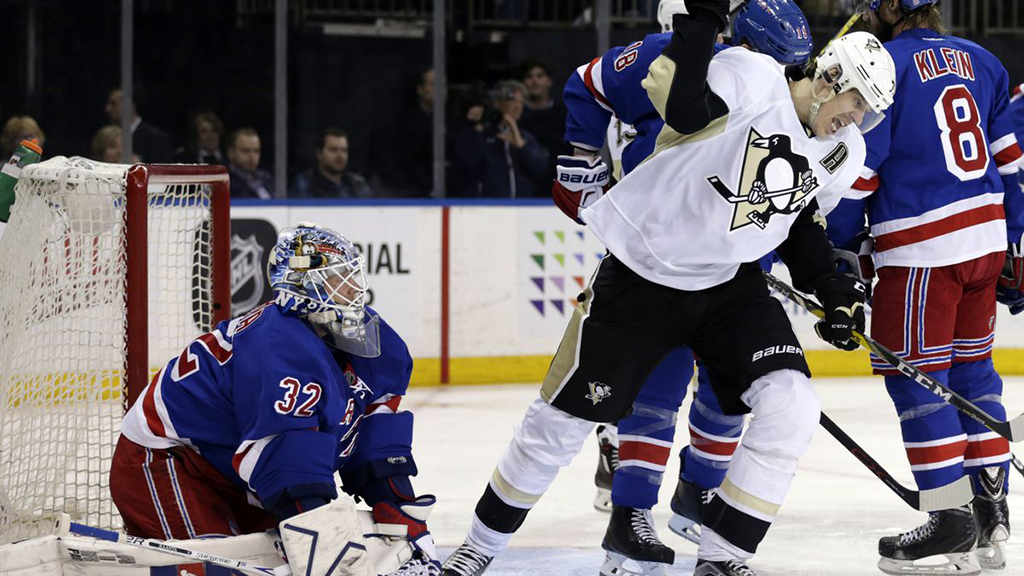 Grab your best funeral attire, on Saturday at CONSOL Energy Center, we officially lay the 2015-2016 New York Rangers to rest.

This was an absolutely dominant performance from the Pens, at Madison Square Garden, at full capacity (save for MAF) and Matt Murray once again outdueling Hank to the tune of a 31-save shutout.

Make no mistake, while the Penguins absolutely dominated this game aided by three power-play goals, Murray had to be up to the task in the first and third periods, making 11 and 14 saves, respectively.

Obviously, we’ve been burned by a 3-1 series lead over the Rangers fairly recently, but this just feels different, doesn’t it? The fire is there from the Penguins. The want to close this out is there. There was no big celebration despite running the Rangers show and taking two at MSG.

The Pens shuffled the lines a little bit but it’s mainly what we saw to end game three. Fehr and Rust swap, Kunitz and Sheary swap.

Sheary was exceptional in game three so the promotion is well-deserved. Adding a little bit of speed to the combination of Cullen and Kunhackl in Rust is will give the fourth line a bit of an added punch.

Lindberg swaps in as 3C for Kevin Hayes…not sure I understand that, but whatever.

Prior to face-off, the broadcast let us know that Kris Letang’s 16 playoff goals are the most by a defenseman in Pens’ history. That is WILD to think of when you remember guys like Paul Coffey and Larry Murphy both suited up for the Pens in Stanley Cup runs. I know they weren’t here as long but the eras in which they played, you figured scoring as even a defenseman was a bit easier.

The gameplan was clear right from the start, shots to the net, crash hard and if that isn’t there, get possession and push the pace of play at the rangers.

It took just over a minute for this strategy to bear fruit.

Ben Lovejoy would carry the puck from the defensive zone all the way across the Rangers blue line and put a shot on the net.

Eric Fehr worked himself free from the backcheck of JT Miller and ended up right on Lundqvist’s doorstep where he jammed home a rebound.

Just how you draw it up.

If there’s one thing Henrik Lundqvist absolutely LOATHES it’s players crashing the crease. You’d think a future Hall of Famer would be a little more poised, but nevertheless.

The Penguins have been taking advantage of this all series (all season, really) and getting him rattled.

Taking the lead from their hero goaltender, Rangers fans made sure they let the refs know they were mad at them for…Letang getting hit from behind and the aftermath is that his skate came up to nearly hit the guy who hit him.

Must be sad being this constantly angry because your team is mud.

About five minutes in, Nick Bonino made the play that kept this game in position for the Penguins to eventually run away with.

Eric Staal uses his size and power to get around Dumoulin and cut to the net. Murray, watching this develop tracks it well and stays with Staal. Once Staal loses an edge, the puck slips away and into the slot. Nick Bonino makes a poke-check that keeps the Rangers from scoring on a play where Murray was taken from the net and they had a wide-open cage. Unreal commitment to defense.

It’s little plays like that that win Stanley Cups.

With Rick Trash in the box, the Penguins power play began what would be a pretty productive evening for that group.

I do enjoy trashing Lundqvist (yes, I know he’s an elite goaltender and hall of famer, do not @ me, it’s a blog you dolts) but literally not a damn thing could do with this one. Malkin’s point shot was deflected by Sid in the high slot and while Lundqvist was able to see it through a half screen from Hornqvist, the change of direction from low-to-high on Malkin’s shot, he just completely whiffed on the reaction.

We tell ourselves goals are inherently random (from a statistical perspective yes, you can’t predict goals) but this was a well-executed plan by the Pens. Beating Hank is really hard. You have to even the playing field and a double screen with deflections is one way to do that.

The Pens would kill off two penalties thanks largely to Matt Murray standing tall in goal.

At this point, when Henrik Lundqvist goes to bed at night, he’s woken up by nightmares of Conor Sheary.

Sheary puts good pressure on Klein and forces a turnover and it’s off to the races.

Staal has zero chance, neither does Klein.

You just love to see it.

Two huge moments in the final three minutes of the period.

ONE: Evgeni Malkin scores on a wraparound but it’s disallowed due to Kunitz and McDonough being tied up in the crease.

Fair call, Kunitz kind of leads McDonough into the crease to begin with and then McDonough doesn’t really let him out either. Hank’s given no chance on the puck so it’s waived off.

Stalberg puts an innocent shot on net and Murray obviously handles it. The rebound pops right to Eric Staal and Murray, seemingly with no chance, gets a piece and the Pens hold on to their 3-goal lead.

You could see it in the Rangers’ body language as the period slipped away. They did not have an answer for the Penguins.

If you expected a pushback from the Rangers in the second, you were sorely disappointed.

So much so that just a couple of minutes in after a putrid turnover from Brassard right to Bonino to keep possession in the zone, MSG let the boos fly.

I gave you guys crap earlier for booing a no-call during a non-penalty but I feel ya now.

The Pens sent a barrage of shots at Lundqvist, moved the puck with precision and were just outright better in all three zones from the drop of the puck.

Their speed and possession became too much when Dominic Moore dropped Geno behind the Rangers’ net. Pure frustration.

It didn’t take long and a Geno bomb on the power play all but put this bad boy out of reach for the Rangers.

Hornqvist forces a rebound after Malkin’s inital point shot, Crosby takes it behind the net, circles out and sees Geno wide open in the middle up high.
Malkin tees it up and Hank had zero chance.

After a TV timeout with just under 14 minutes to go, the Rangers decided to yank Lundqvist in favor of Raanta.

Right move. It certainly was not Hank’s fault the Rangers had no answer, in fact, without him it would’ve probably been 5 or 6-0 rather than 4.

Directly off the ensuing faceoff, Tanner Glass got a stick up into Cullen’s face, drawing blood and he would sit for a double minor.

Unfortunately, the Penguins’ power play would fall from 100% to 50%. No idea how they recover from this.

Penguins would get a few chances, including Letang off the post, but nothing doing.

Pack it in, folks.

While the Penguins’ power play stopped being perfect, the PK remained perfect.

A couple of big blocker saves by Murray and they killed off a Lovejoy penalty with relative ease.

The period slipped away with the Rangers rarely threatening and the Penguins content to just keep sending the puck down the other end of the ice through solid breakouts at shots at Raanta.

The Rangers had a little bit of a push to start the third but as he had been all night, Matt Murray was there.

Good sequence for him here, the rest of the squad? Not so much.

Bad turnover leads to a shot on goal, losing track of the man on the goal line who gets the rebound, but through it all, Murray makes the stops.

Geno, after being slashed by JT “Sort-Of-But-Not-Really From Pittsburgh” Miller would extend the lead to five on the power play.

Unreal pass by Dumoulin to see Geno breaking to the back door after Daley’s shoot-in.

Can’t really ask for much else.

Throughout the period, the Rangers would get chances but Murray was right there again, stopping 14 shots and the Pens cruised to a near-flawless victory.

Maybe none better than a point-blank shot right in front with no stick.

Bury them on Saturday.