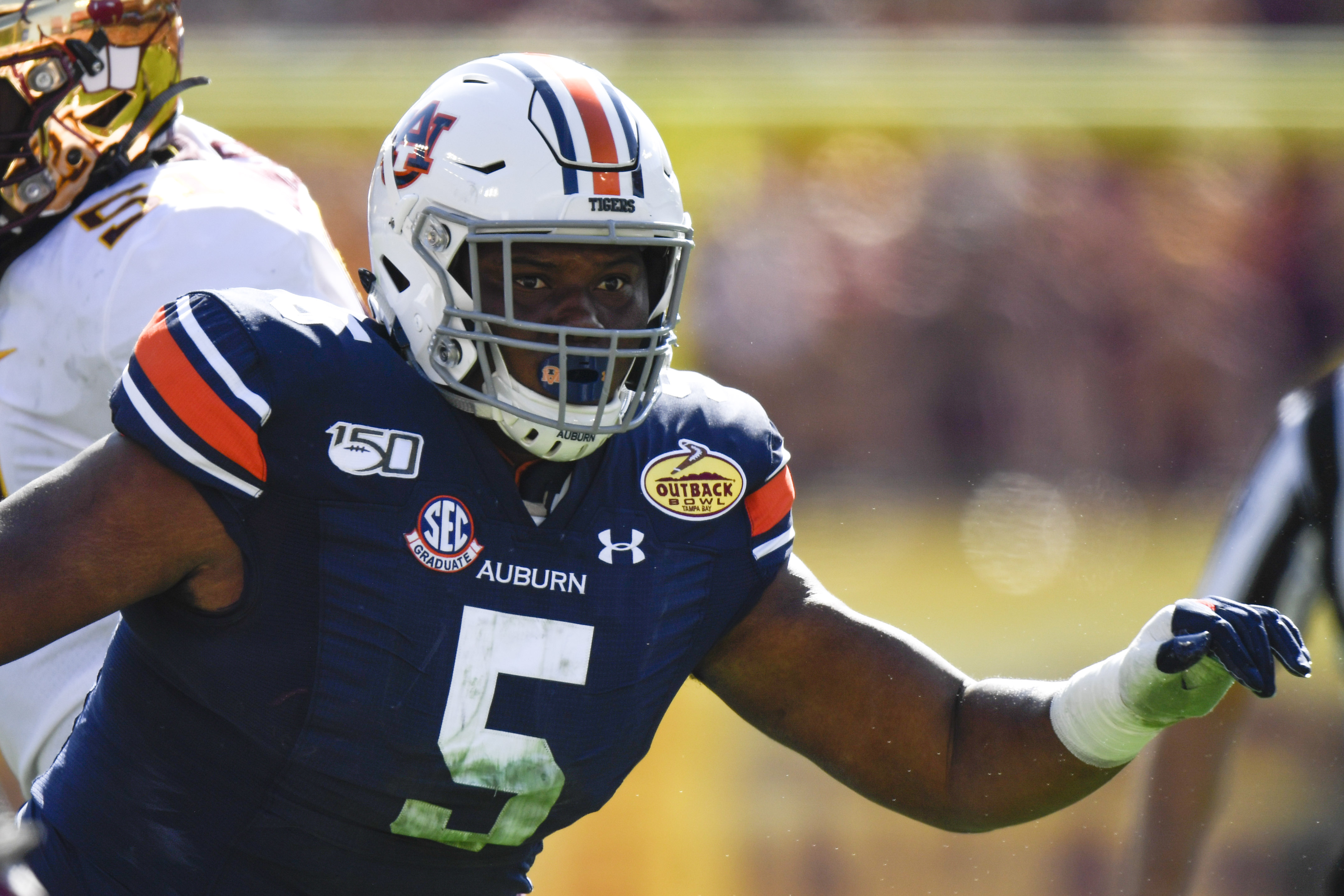 The Detroit Lions had one of the worst defenses in the NFL in 2019.

They ranked second-worst in total defense and 21st against the run. They also tied for 29th-worst with only 28 sacks as a team. Their problems could be fixed by one defensive tackle from Auburn.

Derrick Brown, a 6’5″, 326-pound force of nature, is one of the most talented players in this draft. He also could fill a void created by the departure of Damon “Snacks” Harrison. When the Lions first traded for Harrison in the middle of 2018, they were near the bottom of the league against the run. In the weeks after the acquisition, they became the second best team against the run.

When Harrison’s play stumbled in 2019, so did Detroit’s.

While they signed veteran DT Danny Shelton to a two-year deal to replace Harrison, it doesn’t mean they won’t at least take a look at Brown. While Shelton is most likely a temporary stopgap, Brown could be the future.

He had a monster senior season for the Tigers as he was named first-team All-American and first-team All-SEC. He garnered these honors after posting 55 tackles, four sacks, two forced fumbles and tying for the team lead 12.5 tackles for loss.

So let’s take a look at what Brown could bring to the next level:

Athleticism and Size: While Brown was about average compared to others at his position at the NFL Combine, he is anything but. His 5.16 40-yard dash, 28 reps on the bench press (tied for 7th best among defensive linemen) and 27″ vertical jump don’t jump off the page at first glance. But when you consider Brown is 6’5″ and over 320 pounds, it puts just how athletic he is into perspective. With some NFL training and conditioning, Brown could use his size and strength to manhandle professional offensive linemen like he did to those in college.

Quickness and Power: Brown’s quickness off the snap allows him to get into blockers before they can react. This can force them into recovery mode and that is how Brown is able to get into the backfield and disrupt plays before they even develop. His club move is so powerful, it throws blockers out of balance and position. He is also a linebacker’s best friend as this power frequently calls for double-teams.

Pass Rushing Ability: Brown’s 12 career sacks shows he’s not the best at getting to the quarterback. While that won’t be his primary job in the NFL and he certainly can disrupt the QB, many fans, and organizations for that matter, may want a defensive tackle that can rack up sacks. Especially with the emergence of Aaron Donald as perhaps the best defensive player in the NFL, the expectations of DTs have gone up in recent years.

Stiffness: Brown can sometimes be stiff at the knees, which can limit his ability to create consistent pad level. It also limits his agility once getting past blockers and this limits his pass rushing ability. While these are things that will most certainly be addressed at the next level, Brown will have to get better at being more flexible to become a Pro Bowl type player in the NFL.

With the signing of Shelton, defensive tackle is certainly not the Lions’ number one priority in the draft. But Brown could be a prime candidate if Detroit ends up trading back from 3 to 5 or 6. In today’s NFL, you can never have enough depth on the defensive line as getting to the quarterback is objective number one in the era of high-powered offenses. Also, Shelton only signed a two-year deal and could be the perfect mentor to a young Brown. So while he may be a bit of a reach at 3, Derrick Brown could still very well end up in the Motor City.

All stats and measurements courtesy of ESPN.com and NFL.com.