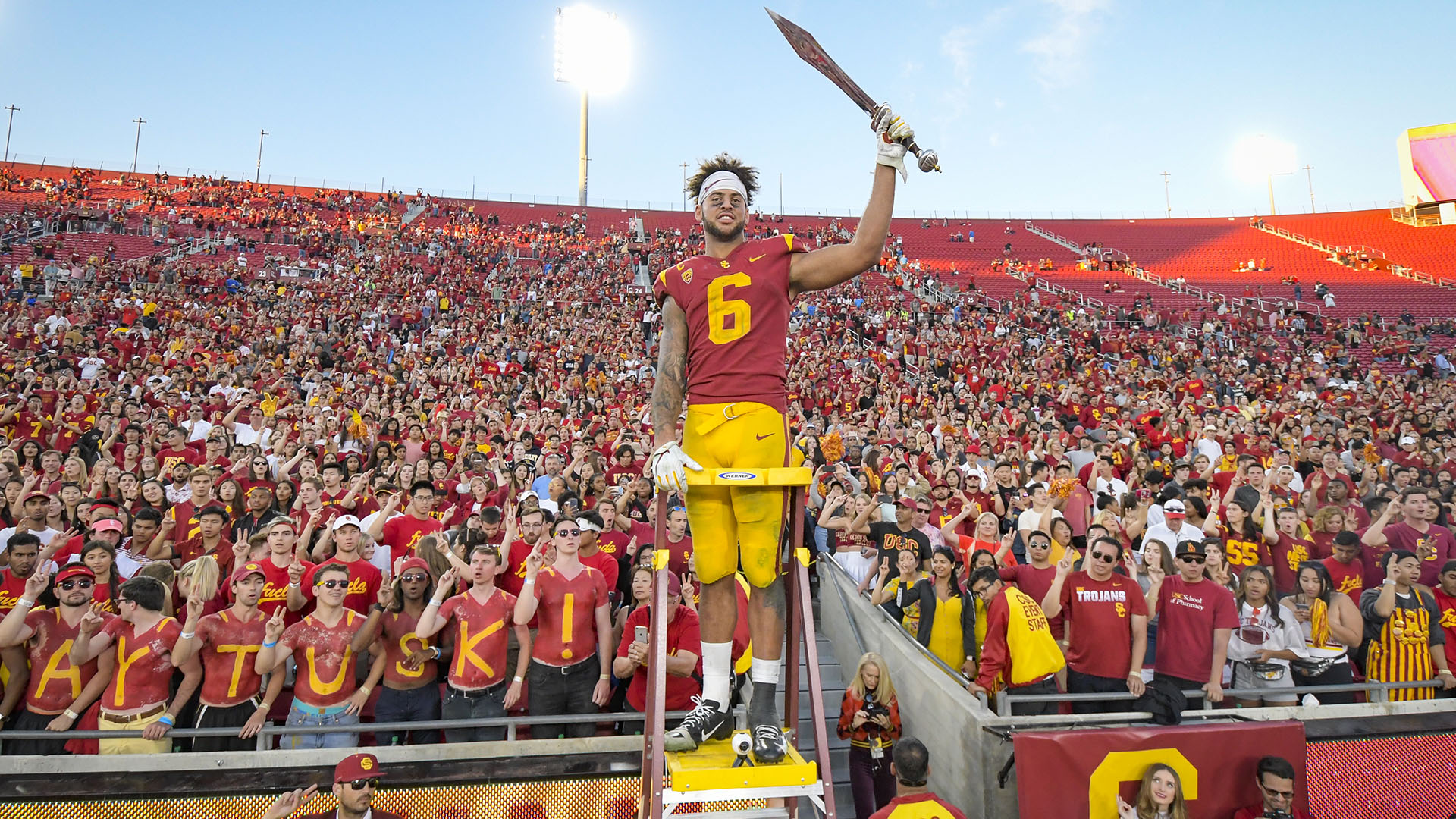 What’s up, Colts fans? Here we are. It’s draft day, and time for another draft diary. In the past, I’ve watched the round through the Colts’ pick, given my thoughts on said pick, then slept on it and added some more the following day.

One little problem I’m sure you’re aware of: They have no first round pick. I have no idea what’s going to happen. I suspect they will stand pat, I will end up bored, and this article will be worthless.

Let’s go. All times are CST

7:04:  Virtual Goodell appears to loud boos in homes around the world. He’s trying to sell people on donating. Ok, Roger.

7:09:  ESPN is already killing this event, and I don’t mean in a good way. The national anthem being performed? Lame videos? C’mon guys.

7:25:  Broseph Burrow is the surprise #1 pick to Cincinnati. This is about as surprising as Goodell getting booed.

7:32:  Chase Young goes second to Washington. I don’t often get excited over college players, but damn is Young good. All of these guys are terrific players, and most will not be stars in the NFL. I would be shocked if Chase Young isn’t.

7:55: Miami takes Tua Tagovailoa. A team from a state which just reopened beaches in the middle of a pandemic selects a QB who scored a robust 13 on the Wonderlic. What could go wrong? I’m not hating. I think this could turn out to be a great pick for Miami. He definitely has some skills.

8:02:  Justin Herbert is pick #6 to the Chargers. Word is they were enamored with Tua, so it looks like they went with their second option. My personal opinion is Jordan Love is better, but what the hell do I know?

8:10:  Apparently it was Carolina who picked him. *shrug*

8:15: Arizona takes Clemson LB Isaiah Simmons. I like this pick. He can play inside, outside, even safety. My issue: one of the ESPN talking heads giving a Reggie White comp. No. Absolutely, no. Never.

8:23:  The Glitter Kittens select DB CJ Henderson from Florida. The dude they picked from FSU (Jalen Ramsey) didn’t work out, so I guess they thought they’d try UF this time.

8:27:  Cleveland nabs T Jedrick Wells from Alabama. The talking heads are talking up the left tackle position. Once upon a time, left tackle may have been more important than the right tackle spot, but those days have been gone for years.

8:40: The newly christened Las Vegas Raiders draft WR Henry Ruggs from Alabama. Ruggs had 97 catches in college, 25 for touchdowns. That’s a pretty good ratio. 4.27 40 speed. Not even the best WR on his team. Classic Al Davis pick here, other than they’ve drafted a speedster to pair with a QB who doesn’t throw deep.

8:47:  We have our first trade! The Bucs move up a whopping one spot, exchanging picks with the 49ers. My guess is they take Alabama’s best WR, Jerry Jeudy. We’ll see.

8:51:  The author is wrong. Tampa selects some OL from Iowa whose last name is Wirfs. What a steal.

8:56:  Commercial break. Betting the 49ers nab Jeudy with the next pick. I’ve been wrong before…

9:05:  Even a blind squirrel finds a nut. Denver selects Jeudy. Our long national nightmare is over.

9:13:  Atlanta takes Clemson CB AJ Terrell. I wish I knew something about him. People are calling this a reach pick. I have no idea. I’m sure AJ’s a great dude, though.

9:19:  Pick 17 is WR CeeDee Lamb of Oklahoma, who goes to the Cowboys. I like this pick, but feel bad for the kid since he won’t be playing in the playoffs this season.

9:25:  Commercial real talk: this quarantine has been tough for a lot of us. For me, things haven’t changed much at all. I’ve been going to work every day, same as always, and quite frankly, I could use a vacation. I hope you’re all holding up well.

9:28:  Miami picks again, this time taking USC OT Austin Jackson. They keep talking about how this is a blindside protector for Tua. Again, in this day of football, the right tackle is just as important as the left.

9:33:  Goodell screws up and announces Las Vegas “will host the 2020 draft.” It *is* 2020, Roger. This is a virtual draft. Anyway, the Raiders pick Ohio State DB Damon Arnette. The experts are telling me this is a reach pick.

9:41:  The Glitter Kittens are picking again, and this time it’s LSU LB K’Lavon Chaisson. Since he played for LSU, we’re hearing all of the superlatives. It’s the Glitter Kittens, though. He’s going to lose more games in his first season than he lost in his entire LSU tenure.

Maaan, he looks thrilled to death.

9:47:  Philadelphia selects WR Jalen Reagor. They’re saying he’s been rising up draft boards. I don’t know about that, but I do know he’s the son of former Colts DL Montae Reagor.

9:57:  Trade! The Chargers move up to pick 23 and take the place of the Patriots. New England now has 13 picks for the rest of the draft. That’s a lot.

Here’s Belichick in his war room. Earlier, ESPN showed Horseface Elway sitting in his room, acting like a stud because of the Super Bowl trophies in the background. See how minimalist Belichick is here? *This* is how you do it, Horseface.

10:01:  Sandy Eggo, I mean, LA, uses the pick on Oklahoma LB Kenneth Murray. The experts seem to like it. I know nothing about him.

10:09: The Aints take Cesar Ruiz, a Center from Michigan. I will confess that this is the first time I’ve ever heard of him.

10:15:  Niners have another pick? What the hell is this? All these teams with multiple first rounders and Ballard is out here doing…..I don’t know. Anyway, the Niners select WR Brandon Aiyuk from Arizona State. His highlight reel is impressive. Good at the double move.

10:25:  With the 26th pick, Green Bay selects Jordan Love, QB from Utah State. A lot of Colts fans coveted him. I liked him. It was probably never going to happen, but the bigger story here is who picked him. Aaron Rodgers is 36. Brett Favre was 35 when the Packers drafted Rodgers. Remember all of the chaos that caused? It’s about to happen again.

10:42: Baltimore selects LB Patrick Queen from LSU. The talking heads are calling him a play maker. Funny how everyone who played for a national champion seems to be that.

10:47:  The Titans take some OL from Georgia, and Mike Vrabel looks as creepy as ever.

10:58:  Miami has another pick. Damn, this is three. They select a CB from Auburn named Noah Some Last Name I Can’t Pronounce. He’s an athlete.

The Colts are on the clock for the second pick of the 2nd round. The choice is….

As with basically any other attempt the Colts have made at finding a big WR, at this point we just need to pray the kid stays healthy. Instead of buying toilet paper in bulk, let’s start hoarding the bubble wrap.

Trade! Something’s up, as the Colts have moved up to 41, giving up pick 44 and a 5th rounder to Cleveland in order to do so. The choice is…

Ugh. Remember Ron Dayne? Montee Ball? Melvin Gordon? Remember how they were all studs and were going to be stars in the NFL? My point exactly.

What happens is Wisconsin runs these guys into the ground, and when they finally get to the NFL the tank is half full, maybe less.

Taylor is fast, he’s solidly built. Rushed for over 2000 yards twice, and was less than 25 yards from doing it three times. Scored 55 touchdowns. If he got through the line, though, he was off to the races. He’s been extremely durable.

He’s also had almost 1000 touches in 3 years, fumbles too much, isn’t a great blocker, and isn’t a very good pass catcher. Then there’s the kiss of death: He hasn’t been hurt yet.

Look, I hope Taylor becomes an absolute stud. History says he won’t, but I hope he defies the odds. Until then, I’m sitting here saying “damn, why didn’t they draft Antoine Winfield Jr.?”

Bottom line on any pick, no matter when they’re selected: The scouts can say this, the tape can say that, but we never know until they get out there. The sure thing becomes a bust. The afterthought becomes a star. Happens a lot.