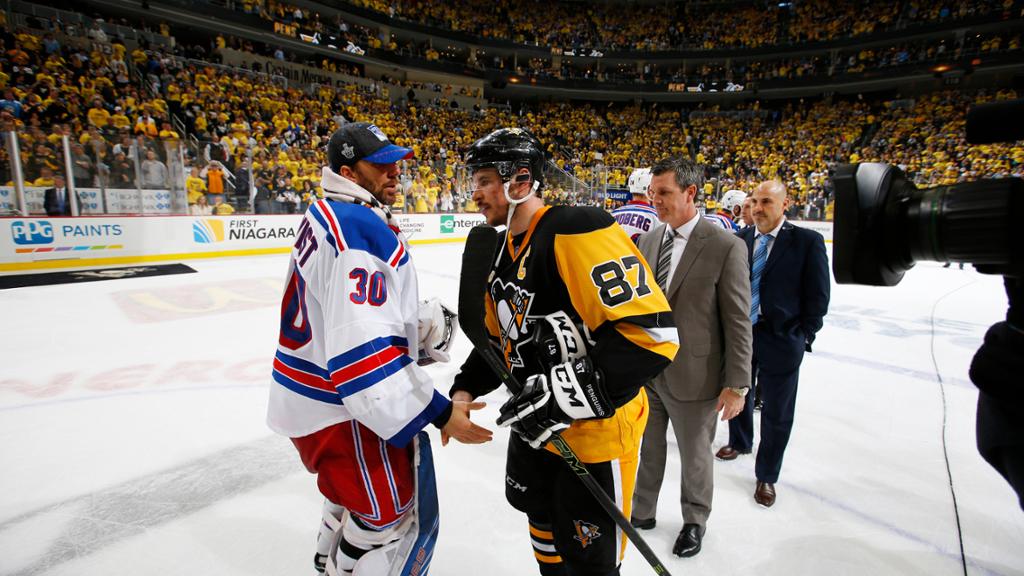 That’s exactly what game five was. An early deficit, at home, with the Rangers on the ropes, Bryan Rust and Phil Kessel went to work and put the Rangers to bed.

Either way, we’re moving on.

Pens got out of this healthy, which is even better. Little bit of rest between series and no injuries to really speak of.

Before we start the recap – gonna be a little different here, I’ll highlight a few key moments in the game and we’ll do a series recap as a whole.

You beat the hell out of your opponent on their own ice, no need for any real changes.

Rangers going with what the Penguins had in game one – 11 forwards and 7 defensemen. Interesting move. The way the Penguins have been skating and moving the puck, an extra body on defense might not be their worst idea.

It was a pedestrian start for the Penguins and that’s not a good thing. It led to a lucky bounce for the Rangers that gave them a 1-0 lead to start.

Kunitz was careless with the puck on the wall in the defensive zone, blindly throwing the puck back to the corner for a defenseman that wasn’t there. Brassard would work the puck to the point, Giradi got into the shooting lane and as he let the shot go, Nash swooped through the slot and deflected it. Murray was unable to track it and the Pens were down just 1:02 into the contest.

The Penguins woke up a few minutes later and started taking over, as they had all series.

It was the line that had been so hot down the stretch and throughout the series that got it started.

Some extended zone time and the best way to be Henrik Lundqvist is to go to the net. That’s exactly what his former teammate Carl Hagelin did.

Dominic Moore would add a goal to give the Rangers their final lead of the 2015-2016 season.

A power play and more brilliance from Phil Kessel was the snowflake that started the avalanche.

Streaking down the wing and all Sid had to do was put it on Phil’s tape. He did just that and Lundqvist couldn’t find it.

Just five minutes into the second period, Big Game Bryan got his first Stanley Cup Playoff goal and what a way to start it. Beating Henrik Lundqvist to give the Pens a lead they would never relent.

Rust would add another to end the second period as the last in a sequence of five unanswered goals, giving the Penguins a 6-2 lead and punch their ticket to the second round.

Kreider would add a goal in what wasn’t garbage time because there was still over half a period left but you knew.

3. Sidney Crosby: A brilliant display from Sid through five games. Sure, he’s still got a good few years ahead of him but before we know it, he’s going to be well into the back-nine of his career and you can tell his mentality has fully become that of, “I don’t know how many more cracks at this I’m going to have.” He was his usual dominant self, 3 goals, 5 assists, 8 points in five games. What won’t get mentioned about his performance this series – his shooting percentage was 25%. One out of every four shots Sid took this series went in. A determined and streaking Sid with a hungry, streaking team behind him should send shockwaves through the remaining 7 teams once round two begins.

2. Matt Murray: A limited sample size, yes but in three games, Matt Murray faced 89 shots and made 85 saves, good for a .955 save percentage and a shutout thrown in there. It’s not easy being the goalie of the Pittsburgh Penguins, it’s a team that doesn’t commit much to defense, well not that you’d notice anyway. It’s also not easy to start your Stanley Cup Playoff career at Madison Square Garden and give up a grand total of one goal in two games.

Honorable Mentions:
Rick Nash – Only four points but he was one of only a handful of noticeable Rangers all series long. Nash isn’t quite what he used to be but he’s still got some juice left.

Henrik Lundqvist – The .867 save percentage says he was bad. The eye test says without a goalie in the mold of Henrik Lundqvist, the Rangers don’t win a single game this series. Even with an .867, he still made nearly 100 saves in 5 games. Hank was left on an island for a lot of this series.

Jeff Zatkoff – You know good and goddamn well why.

1. Phil Kessel: The Penguins scored 8 power play goals in this series and Phil Kessel had three and assisted on two of them. The power play belongs to Phil Kessel and when you want to win a Stanley Cup, your power play often makes the difference. Well, when it comes to the Penguins power play, they have enough difference makers. This is what GMJR brought him here for and he’s living up to his end of the bargain.

Not only did the Penguins big guns come to play, the role players were there throughout the duration of the series.

Lastly, New York couldn’t decide the type of game they wanted to play against the Pens. At times they were content to slow the pace down, clog the middle of the ice, and try to frustrate the Pens, and at times, that worked! Then they would open it up and dare the Penguins to catch them in a track meet. This, as evidenced by the clinching game, would not end well.

Get ready to hate. It’s either the Caps or Flyers. My money is we get our first Sid-Ovi matchup since 2009.