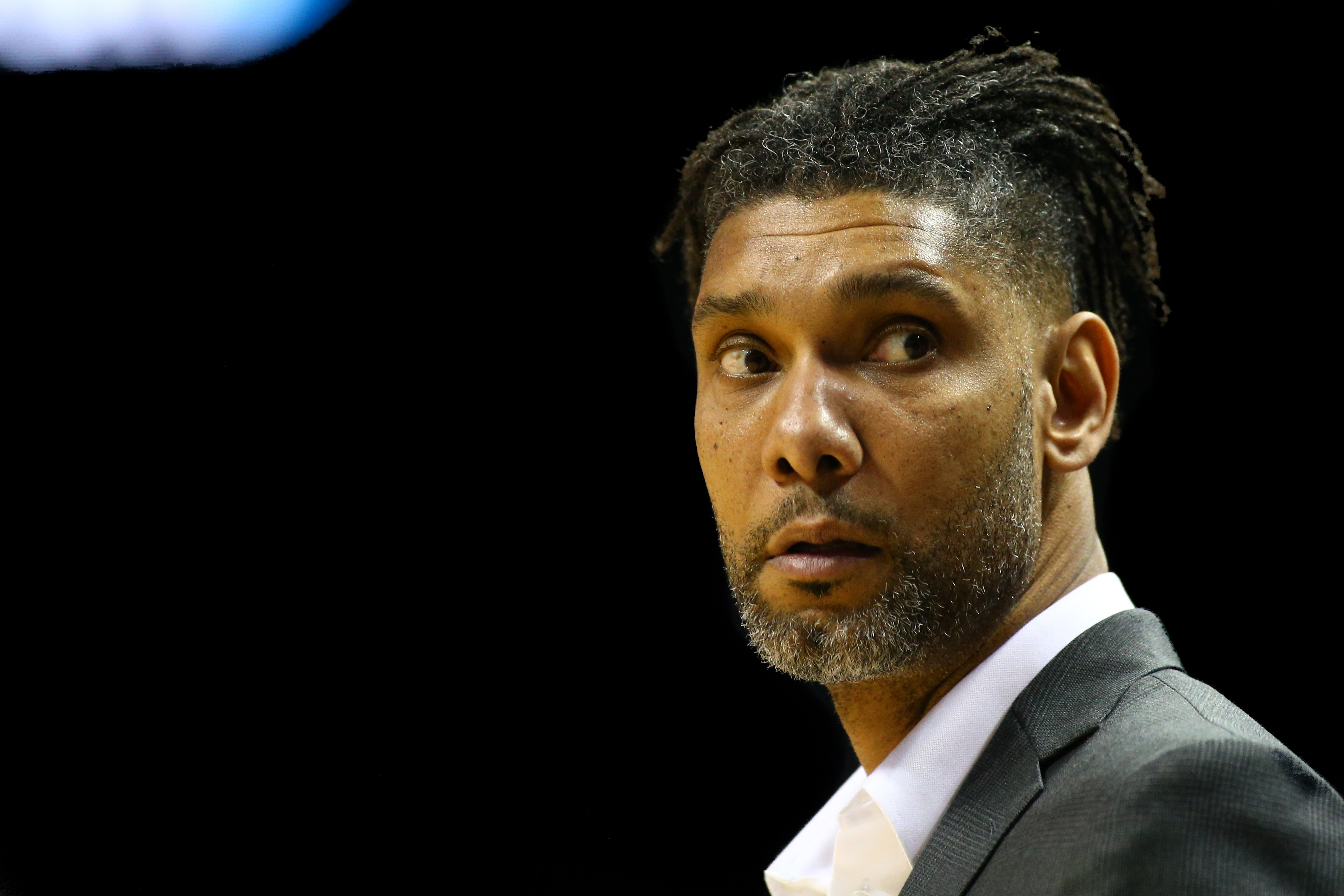 From their first matchup in 1999 to their final matchup in 2016, Dirk Nowitzki vs Tim Duncan always gave fans something to watch. Whether it was a low pressure regular season game on a Tuesday night, or a highly anticipated win or go home playoff affair, Dirk and the Mavs vs Timmy and the Spurs never left fans disappointed.

Regular Season by the Numbers

Throughout their 17 years of going back and forth on the hardwood, Nowitzki and Duncan matched up a total of 57 times in the regular season, with Duncan and the Spurs winning 35 of those games. In the 57 contests, the two were separated by a total of 12 points, 30 assists, and 12 steals. Their full per game numbers against one another can be seen in the table below.

Playoffs by the Numbers

Going back and forth on the court for 17 years no doubt leads to a good rivalry, but every rivalry needs to have historic matchups in the postseason, which Dirk vs Duncan had. The Mavericks and Spurs faced off in a total of 33 playoff games with Dirk and Duncan on the court, matching up across 6 total playoff series, with the Spurs winning 4 of those series. Just like their regular season games, their numbers against each other in the playoffs were almost identical.

Coming off a terrific rookie campaign in which Tim Duncan, the first overall selection in the 1997 NBA Draft, won NBA Rookie of the Year, his next great rival was about to enter the NBA. But, for Dirk and the Mavs, it was not a simple maneuver to get the big man to Dallas. The Mavericks had the 6th overall pick in the 1999 NBA Draft. Through a series of four moves, Dirk and Steve Nash wound up together in Texas.

Finally, it was time for Dirk and Duncan to kick off their 17-year rivalry. However, during the 1998-99 season, the rivalry did not get off to an exciting start. Their first matchup happened on March 4th, 1999. The Dallas Mavericks were playing below .500 basketball, while the San Antonio Spurs were the best team in the Western Conference.

The game ended in a 16-point win for Duncan and the Spurs. Duncan finished the game with 26 points and 12 rebounds, while Dirk came off the bench scoring 11 points and grabbing 6 boards.

The rivalry started to heat up throughout the first three years the two shared in the NBA, but it came to the forefront in the 2001 NBA Playoffs.

After the Dallas Mavericks and San Antonio Spurs got through their first round opponents in a timely manner, that set up the first of six playoff series between Tim Duncan and Dirk Nowitzki. The Spurs were heavy favorites at going into the series as the top seed in the Western Conference.

The series went as expected, with the Spurs winning in 5 games. All of San Antonio’s wins were by double digits, with Dallas getting their lone win in Game 4 in front of the Dallas faithful.

About 30 games into the 2001/02 NBA season, the Mavericks and Spurs were leading the way in the Western Conference. Going into their classic regular season matchup, Dallas was sitting at 18-9, with the Spurs leading them at 20-5.

The game was tightly contested throughout, with a total of 13 lead changes and 12 ties. Going into the fourth quarter, the Mavericks held a slim 86-82 lead. Then, Nowitzki vs Duncan took over. Dirk started the first half of the fourth quarter by scoring 11 straight points. However, right after Nowitzki’s 11th straight point, it was Duncan’s turn. Duncan turned around with his own run of 13 straight points, and it was now just a one-point game with 3 minutes remaining.

With some big buckets from Steve Nash, answered by a timely three from Terry Porter, this game was headed for overtime.

In overtime, Steve Nash and Tim Hardaway took over for the Mavericks, combining for all 10 of Dallas’ overtime points. Tim Duncan was doing all he could to keep Dirk in check and lead the Spurs on the offensive end, scoring all 7 of San Antonio’s overtime points, but with 2 seconds left, Steve Nash put a nail in the coffin.

Jumping ahead to the 2006 NBA Playoffs, one of the most iconic series in the NBA in the 2000s was about to take place. The top seeded Spurs were once again set to play the Dallas Mavericks in the second round of the Western Conference Playoffs.

However, with the way the NBA seeding was done based on divisions in 2006, this was the marquee matchup in the West. The Spurs and Mavericks were by far the two top teams in the West, the Spurs holding a 63-19 record, with Dallas close behind at 60-22.

With 3:28 left in the fourth quarter, the game was tied at 84. The Spurs went on to hold the Mavericks to one free throw the rest of the way, with Dirk getting just one shot down the stretch.

The only game the entire series with a double-digit win. The Mavericks gain home court advantage.

A total of 12 lead changes in the fourth quarter. With 17 seconds left in the game, the Spurs are up by 1, needing a defensive stop to get back home court advantage and take the series lead. They get their stop, forcing a Jerry Stackhouse missed jumper, but they cannot control the rebound. Dirk grabs the board, gets fouled, and drills two free-throws with 8 seconds left to win the game.

In the first overtime game of the series, Game 4 looked awfully similar to Game 3. With 15 seconds left in regulation, the Spurs were up 111-109, again needing just one stop to even the series going back to San Antonio. In a similar fashion, although not off of an offensive rebound, Dirk Nowitzki was fouled and sent to the line. He drilled both and sent the game to overtime, where the Mavericks never looked back.

Behind a 21-point second quarter from Tim Duncan, the Spurs were hanging on for their playoff lives on their home court in Game 5. Again going down to the wire, the Mavericks had the ball with 15 seconds remaining and the Spurs leading 98-97. Then, chaos erupted. Through a series of blocked shots, two jump balls won by Dallas, and a missed jumper by Jason Terry as time expired, San Antonio held on, forcing a Game 6 in Dallas.

Another close game going down to the wire gave the Mavericks a chance to tie the game with 12 seconds remaining. The Spurs had just taken a 89-86 lead, as Dallas called a timeout to draw up some action. The Mavs did not get the shot they were looking for as Dirk forced up a tough fadeaway three and set up a Game 7 for the ages.

Truth be told, the Mavericks were in a position to win this game the entire way. They had led the overtime affair for all but 11 seconds, but those 11 seconds is what makes this game a classic.

With 30 seconds left, and the game tied, Manu Ginobili stepped up and drilled a cold-blooded three, giving the Spurs a 104-101 lead. Then, Dirk Nowitzki came back and converted an and-one to tie the game. The Spurs called timeout, setting themselves up for a game-winning shot. Manu drived to the cup, missed, rebounded by Duncan, who put up a shot from point blank range, only to have it swatted from behind by Dirk. The Mavericks did not give the Spurs any hope in overtime, cruising to a 119-111 win in a season that would eventually lead them to the NBA Finals.

At the end of the series, the averages were off the charts.

The 2006 NBA Playoff series was the peak of Dirk vs Duncan. They would have many more classic regular season battles and three more playoff series against each other, but the back and forth action and grind it out level of play between two of the best power forwards in the game fueled a great rivalry.

While the current NBA season remains on standstill, that has not stopped media outlets keeping us in the loop. For example, SBD’s basketball betting and news is updated consistently. With NBA futures available to wager on and the NBA draft in June will truly have a major impact on the Championship odds for this and next season.

Whether or not the current NBA season continues remains to be seen. But as we wait, we begin to look back at old NBA player rivalries, foreshadowing the rivalries that were supposed to take place this year: Clippers vs Lakers, 76ers vs Celtics, and Thunder vs Rockets.