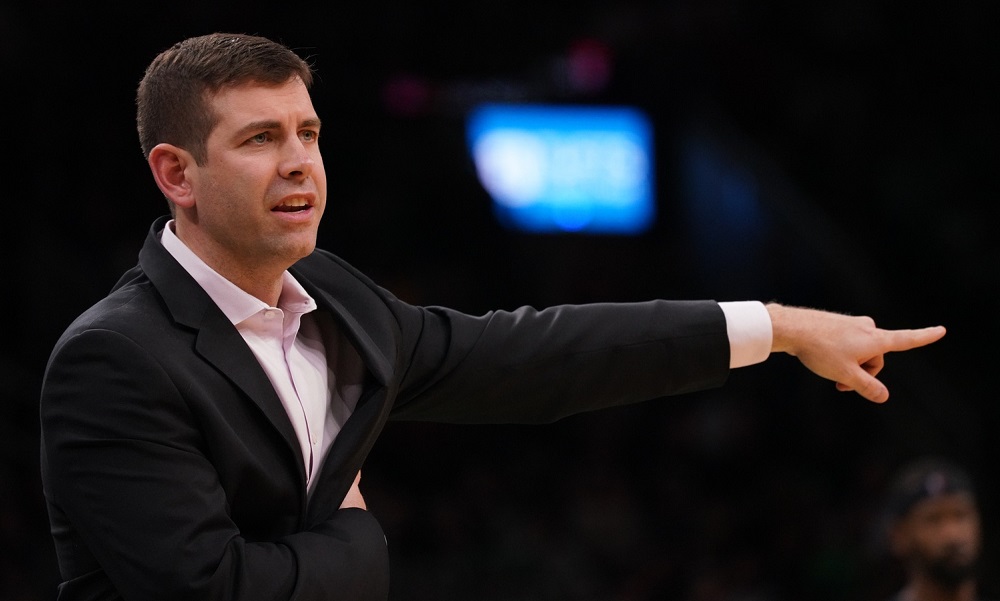 In a call with season ticket holders, Brad Stevens says games without fans would be disappointing, but could provide a unique setting for some interesting basketball.

“I guess playing without fans would be much more like a typical practice environment, and I think that the one thing about these guys is they don’t compete any less hard in practice,” Stevens said. “In fact, sometimes in those quiet gyms where you can hear everything somebody else is saying, it gets even more feisty. And so, I think that it would be great basketball if we’re able to do that.”

MassLive: Brad Stevens: NBA in empty arenas could be ‘even more feisty’

Frankly, the thought of NBA games being played in empty arenas sucks. Royally. Oh, I’m sure we’d get used to it, and the competition is obviously the most important element, but it would be forever weird.

It’s also no surprise that Brad – the coach with the wholesome image and the generally optimistic viewpoint – could find the silver lining to the situation.

Besides, if you listen to the commissioner, we’re going to have no choice. Read on for more.

On a call with the league’s players Friday afternoon, NBA commissioner Adam Silver said any restarted league season would likely be played without fans and would probably occur in one or two neutral sites instead of in team’s home arenas, according to Shams Charania of The Athletic and ESPN’s Adrian Wojnarowski. According to both reporters, Silver told players that his decision on whether or not to restart the NBA’s season could wait until June.

Wojnarowski reports the commissioner also said he hoped that the league’s playoffs would consist of best-of-seven game series in every round and would not be shortened. It’s unclear if the league will complete its regular season or advance straight to the playoffs. […]

The most likely scenario for a return appears to be in the form of neutral sites, and Wojnarowski reports that Las Vegas and Walt Disney World have emerged as the two most likely spots for the league to potentially resume play.

Good to see the league and the players association working together on this unprecedented problem. But are they on the same page? The players don’t seem to agree about the use of a single site.

“When that one was first floated,” said Roberts, the executive director of the National Basketball Players Association, “there was some consternation.”

A strict bubble where players are separated from their families, and only go to and from practices and games to a hotel, might seem attractive initially, Roberts said. But to enforce it, everyone inside would likely have to submit to some level of surveillance. And to Roberts, a former public defender and trial lawyer, that was problematic from the jump.

“Are we going to arm guards around the hotel?” Roberts wondered. “That sounds like incarceration to me.” […]

“So then the players were like, ‘Well, I don’t know that it’s worth it to be away from my family for that long,'” Roberts said. “We could do all that, and then what happens when one or two or 10 players test positive after that 28-day isolation? Do we shut it down?”

ESPN: NBA facilities are reopening, but is the season any closer?

However they work this out, we’ll probably only be able to watch on TV, not in person.

NBA commissioner Adam Silver prepared players for a potentially grim landscape amid the coronavirus pandemic, suggesting the league is preparing for the possibility of no fans in arenas through next season — which projections say would cost the league 40 percent of its revenue, sources told ESPN.

ESPN: Sources: Adam Silver preps NBA players for possibility of no fans through next season

The effects of games without fans would be severe. The league’s collective bargaining agreement stipulates that players receive between 49 and 51 percent of all basketball-related income. A season without ticket sales would drastically reduce the revenue and, unless changes are agreed upon, the salary cap.

Furthermore, the Celtics enjoy perhaps the best home court atmosphere in the NBA. Games are regularly sold out, and the fans are so intense that visiting players often remark on it. We’re proud of that reputation, too, but there’d be no more home court advantage in an empty gym.

Still, at least they’d be playing. For now, we have to believe Silver will somehow bring everyone together.

Among players on the call, there seemed to be an appreciation that Silver was trying to answer questions as candidly as he could — especially given the uncertanties facing league and country with virus. https://t.co/a47PTrWvET

Related – MassLive: Restarting NBA: Coronavirus testing allowed for asymptomatic players, staff (report)  |  The Athletic: Shams: What to know about NBA call with players on Friday about what’s next  |  Herald: NBA leans toward ‘bubble concept’ for resumption of play plans

And, finally… Tweets of the Day

How have #Celtics players kept busy during quarantine? @viinze_17P has a priceless answer for @EnesKanter & @ChrisForsberg_

Plus: Who's been the best celebrity guest on team Zoom meetings?

Mark your calendar for a look at what might have been.

For those who have heard the name Len Bias but were not familiar with his game, ESPN will re-air a Maryland vs North Carolina game from January 1984 featuring both Bias and Michael Jordan Sunday at 3pmET/12pmPT.

Take the survey (free access if you don’t have a subscription).

🗳️Vote in our inaugural Celtics fan survey. Tell @ByJayKing
& @JaredWeissNBA your thoughts on the state of the team
https://t.co/5nNJmvfO6F

The Athletic: The 10 greatest Celtics moments of the past 20 years