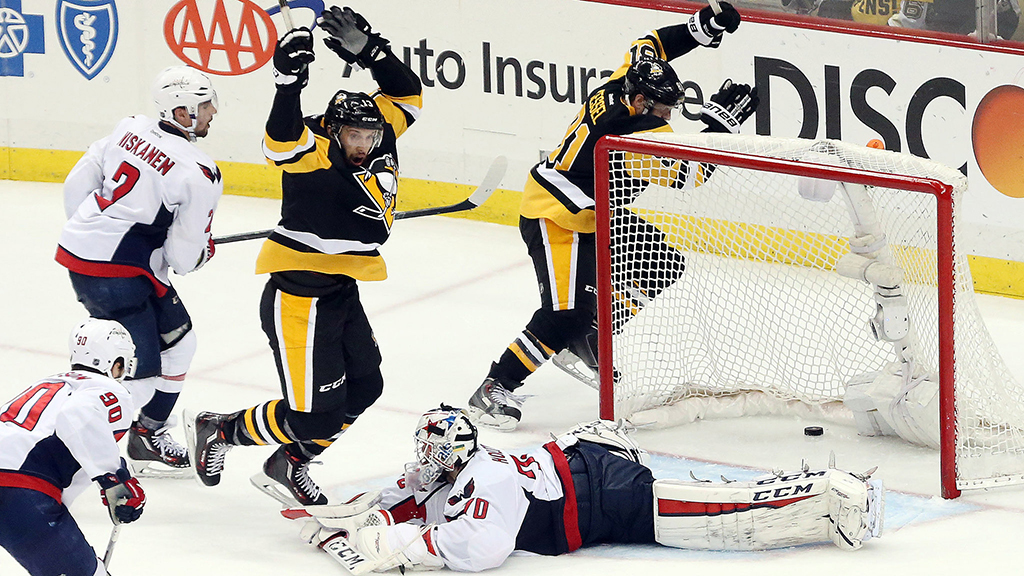 One day, we’re all going to die. Yes, even you.

If there’s one thing that’s becoming nearly as consistent as the passage of time it’s the Pittsburgh Penguins walking up to the Washington Capitals and ripping their still-beating heart out of their chest so they can see it before the Pens move on to greatness.

You figured to yourself it would be one of Sidney Crosby or Alex Ovechkin that would take this one over and declare their band of merry men the winners but no, it was the line that we have come to know, love, and cherish over these past few months: HBK.

Phil Kessel was absolutely marvelous in this one with two goals and an assist, but it was Nick Bonino who took a 120-point, President’s Trophy-winning season and rendered it completely meaningless.

Called chief, this ain’t it. Win when it matters, cowards.

Again, CONSOL Energy Center since it’s opening in 2010 had been missing a moment. There was no Lemieux against the North Stars or Francis against the Rangers.

Nick Bonino in overtime against the Capitals, regardless of how this run ends, will go down as a huge moment for a building that was missing one.

The overtime win, while dramatic, is truly only the tip of the iceberg of what was arguably one of the wildest chapters in the Penguins-Capitals rivalry.

Buckle up, this one wasn’t easy and likely shaved a few years off your life.

Similar to the ending of the Rangers series, we’ll be hitting the key moments and doing a series wrapup rather than a full game recap.

A couple of familiar faces returned to the lineup for game six, Orpik had finished serving his suspension, putting him back in and sending Schmidt to the press box. Olli Maatta was deemed healthy enough to play and Schultz was out.

I’ll never understand Trotz’s reluctance to play Schmidt. Sure, not a stud, but I’m taking him over Chorney eight days a week. Oh, well, better for my team.

The Caps came out with some jump, as expected, but the Penguins let them get punched out and it was Phil Kessel on the counter-attack that opening the scoring with what can only be described as an absolute rocket.

A good defensive play by Letang and a blazing-fast transition game leads to this goal. Letang makes the play and the Pens immediately turn defense into offense.

Edzo says Holtby wants this one back – half true. He should be able to track it better but he also gets slightly impeded by a screen through Alzner. Either way, when Phil Kessel gets everything on a shot…look out.

In another elimination game, no lead is safe and the team facing down their season being over, especially in the Caps’ case, is going to press hard. Even up 1-0, the Pens still had to withstand a barrage throughout the first.

Matt Murray was there.

Dumoulin plays this right taking away the pass, so does Johansson changing the angle. Murray plays it best keeping himself square.

In the second period, the Penguins wanted to end the illusion that the Capitals would take this seven games.

In the first five minutes, they’d generate several chances that ultimately led to a power play.

No idea how Holtby stops this.

Brooks Orpik continued to be a detriment to his team’s success, finding himself in the box for four minutes on double-minor high-sticking.

The Penguins would make him pay.

Unreal deflection. You want to beat a goalie as hot as Holtby has been? Get in his kitchen.

As expected the Caps didn’t go away. They’d add a power-play goal of their own before the end of the second to cut the lead to two.

Just a broken play all around, Cole loses his stick, the PK breaks down and Oshie finds the seam. Nothing you can do.

Right off the hop in the third, Murray would keep the lead at two, stonewalling Burakovsky on an early breakaway.

The Caps would make their push. With just over 12 minutes to go, Murray would let one in he’d want back.

A quick shot after possessing the puck behind the cage, sure, but you gotta stop those.

Then it was time for what will go down as one of the most bizarre scenes from a Penguins-Capitals playoff game you will ever see.

Kunitz after helping break up a developing odd-man rush flips the puck over the glass.

No big deal right? PK has been solid all series.

Just about a minute later, with 54 seconds remaining on the PK, Nick Bonino’s high-stick on the puck becomes much worse.

They’d kill off Kunitz’s minor, leaving just 1:04 to go until…

Murray would stand up and make several saves on Ovi from his office but it was Carlson who would flip the script and score from Ovechkin’s office.

The Penguins treated overtime like a pissed off team that finally had enough. After dominating most of the first six minutes, HBK mercifully put this one away.

Unreal awareness by Nick Bonino to see the puck past through to Kessel and get to the front as a reinforcement. Hagelin puts a shot on, Bonino sits at the doorstep and jams it home.

3. TJ Oshie: Can’t argue with five goals in six games. The dude was a force all series long. While the Penguins did a good job of keeping Ovechkin mostly silent in the goal column, Oshie filled the vacuum on that for Washington. Like I’ve been saying – he’s a great villain.

2. Trevor Daley: His game four performance alone puts him here. There’s no doubting the value of Kris Letang, when you eat up nearly 30 minutes per game, you are a key piece to team success. With his suspension, Daley was forced to step in and fill that void and did he ever. The Penguins winning game four put them in sole possession of the series and home-ice advantage. If they don’t win game four, chances are they don’t win this series.

Matt Murray/Braden Holtby – Both need mentioning. The goals and highlights will dominate the headlines but this was a good old-fashioned goaltending duel. Murray with the slight edge of .926 to .923 but both goaltenders stole a game each and kept their teams in games they really had no business being in.

Matt Niskanen/Karl Alzner – Sidney Crosby had two assists in this series, largely because of how well these two held him in check. It wasn’t for lack of trying on Crosby’s part. He had some chances he didn’t bury but these two took the lion’s share of minutes against 87 and holding him to two assists after he ran wild against the Rangers was no small feat.

Eric Fehr – Up and down and even sometimes out of the lineup, Fehr was steady all series long and had a game two game-winning goal to show for it. Utility guys go underappreciated but during a long playoff run, they help win championships.

1. Nick Bonino: Think of just about every big play of this series. Every big-time goal, defensive play, etc…chances are Nick Bonino played some part in that. Not to mention, of his five points, all came at even strength. The Penguins have been looking for a third-line center to recreate their depth from the days of Jordan Staal. They’ve got him.

This one is tough because this series existed on a razor’s edge. Three of the six games needed overtime and five of the six were decided by a single goal.

A bounce one way or a missed opportunity the other, we could be going to game seven or the Penguins could be the team getting bounced in six.

With no pun intended, it’s the capitalizing on chances. The Caps could’ve forced game seven easily in this one with the Penguins parade to the box in the third but only mustered a single goal out of it.

Game three, the Capitals nearly threw 50 shots at Matt Murray and still lost. The Penguins were opportunistic and made it count when they had chances.

Depth was again a huge factor, Ovechkin led the Capitals in points with 7 while as we said, Sid only had 2 assists. The Penguins’ role players were key in knocking off the Caps and providing what was lacking without Sid.

Well, this is it.

The journey has reached the halfway point. Eight wins down and eight more to go for the ultimate prize.

The second time since 2013 the Penguins are heading to the conference finals and waiting for them is last year’s Eastern Conference Champion Tampa Bay Lightning. Even without Stamkos, they’ve taken care of Detroit and the Islanders in a total of ten games.

Getting out of the east required beating some tremendously talented teams. Tampa is no exception.

The Pens are the second team to punch their ticket to the final four.

Enjoy this and then it’s time to go back to work.