Better in their own zone: Crosby or Malkin? 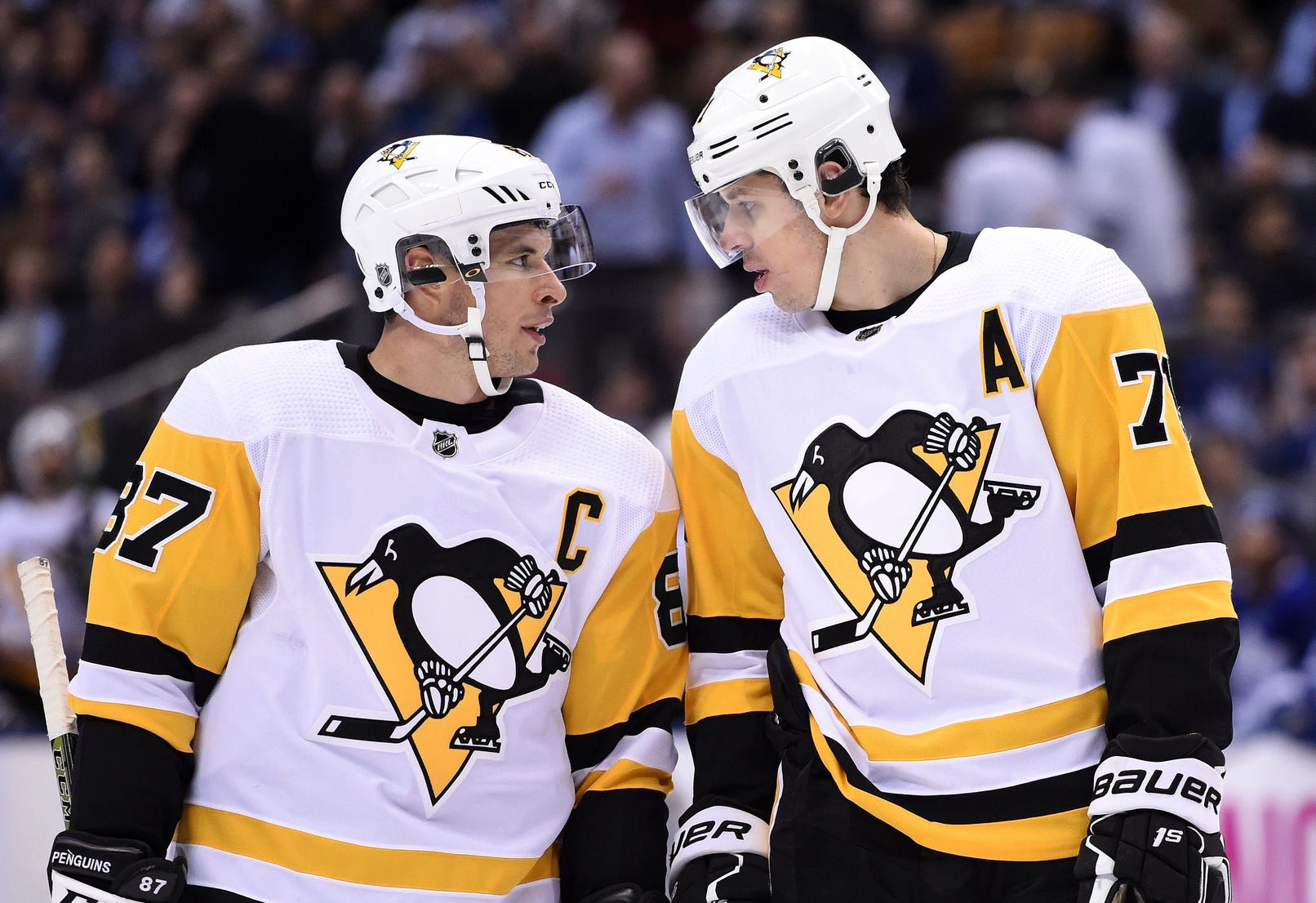 Better in their own zone: Crosby or Malkin?

Sidney Crosby has always been known for his lethal backhander and incredible edge work.

Evgeni Malkin has always been known for his dazzling dangles and ability to power his  way to the most dangerous areas of the ice.

But what about their defensive game?

Malkin has never been considered a good defensive player. Although most of this crowd has disappeared, you’ll occasionally run into someone who thinks he is lazy and doesn’t play defense at all.

That isn’t the case.

Crosby, on the other hand, turned 30 and suddenly started popping up in conversations for the Selke Trophy, an award handed out after each season to the forward who demonstrates the most skill in the defensive component of the game.

The narrative that Crosby had rounded out his game by becoming a force in his own zone was likely contrived by the media in an attempt to romanticize the legacy of the best player of the post-lockout era.

I think there is a middle ground to be found.

Using data as well as video clips, I will be analyzing the defensive play of Crosby and Malkin. The answer to which player has a better defensive impact may surprise you.

What the data says

It’s even more difficult when trying to isolate a player’s defensive impact.

The days of citing plus/minus, takeaways and blocked shots as the only benchmarks for defensive ability are a thing of the past, though if you take a look in the rear-view, you’ll find a group of angry hockey men who disagree.

If you are one of these angry hockey men, for shame. Without delving into it entirely, plus/minus sucks because it arbitrarily chooses when and when not to award a player for being on the ice for a goal or goal against.

It also sucks because skaters have no control over whether their goaltender makes a save or not. However, they do have an impact on the frequency and location of those shots, and that is where the gravy is with defensive analysis.

By taking a look at the number of shot attempts, as well as the quality of the shot attempts a team gives up when a specific player is on the ice, we get a much better view of how an individual skater is impacting his team in their own zone.

Dating back to the 2007-08 season (as far back as the NHL’s RTSS data goes), Pittsburgh Penguins goaltenders typically saw less shot attempts against with Malkin on the ice than they did with Crosby at 5v5, though their career averages are very similar.

Both players were most effective at limiting shot attempts from 2011 to 2015. As both players aged into their 30s, they became much more average.

For the most part, Crosby and Malkin followed the same trajectory from year to year.

Neither player was significantly better than the other, but the slight edge goes to Malkin.

In terms of the quality of those shot attempts, both players were comfortably better than league average from 2012 to 2015, but those days appear to be a permanent thing of the past.

Crosby turned in a strong campaign in 2018-19, then followed it up with the highest rate against of any season for either player.

Again, their career averages are nearly identical, but the edge goes to Malkin. (If you look hard enough you’ll see Malkin’s career average just slightly above the 2019-20 NHL average).

A problem with raw shot attempt and xG numbers is that they don’t isolate a player from their teammates.

Spending a significant amount of time on ice with Jack Johnson is going to result in more quality attempts against than spending that time with Brian Dumoulin.

Instead of penalizing a skater for sharing their ice time with a scrub, we can compare their shot attempts for/against per hour and xGF/xGA per hour to their teammates.

A comparison to the rest of the league is useful, but narrowing down to a skater’s teammates is a bit more practical.

During the 2012-13 season, Malkin was on the ice for over five fewer attempts against per hour relative to his teammates, which is by far the best mark for either skater.

Crosby’s best season in that regard came during the 2018-19 campaign, but the rate barely exceeds half of what Malkin’s was in 2012-13.

Of the 26 combined seasons between Crosby and Malkin since 2007-08, only eight times did they limit attempts against better than the average of their teammates.

Both players were worse at limiting the quality of those attempts relative to their teammates. There were only five seasons in which they outperformed the average.

This past season the Penguins were a strong defensive club, but that wasn’t the case with Crosby on the ice.

Malkin checks in worse than average, though he wasn’t nearly as poor as Crosby.

Crosby’s rough season defensively is only topped by his 2010-11 campaign.

Yet again, their career averages are nearly identical.

Overall, Crosby and Malkin have been average at limiting shots against over the course of their careers, and they are slightly worse at limiting the quality of those shots.

GAR (goals above replacement) is a statistic that tells us how many goals a skater added or cost his team versus a replacement level skater.

Only twice have Crosby or Malkin added (technically subtracted since we’re talking about defense) an entire goal from their defensive play in a single season.

In 2018-19 Crosby took away 2.9 goals versus a replacement level skater with his defense, the best of either player’s career.

He turned around and gave it right back this past season, costing the Penguins 2.8 goals against.

Though he had the worst season, Crosby was typically the more consistent of the two skaters from year to year.

Fascinatingly, both players have cost the Penguins exactly 1.1 goals against per season with their defense over the course of their careers.

What the video says

In this section I will be solely focusing on the 2019-20 season.

The captain has great defensive attributes, but as I mentioned earlier, that doesn’t always translate to strong defensive impacts.

Crosby has hockey IQ like none-other. His ability to see the play unfolding before it happens is unmatched. He does all the little things that make breaking the puck out and clearing the puck so much easier. This is largely due to positioning and knowing when he can hang out at the blue line for an easy exit, and knowing when he needs to hustle to the front of the net to cover Jack Johnson’s man.

He isn’t a great one-on-one defender, but he wins nearly every battle and does so swiftly. He always knows where his outlets are and promptly gets them the puck.

In the GIF below, off the opening faceoff of the third period, Crosby realizes Tampa Bay Lightning forward Brayden Point is about to blow past defenseman Marcus Pettersson and force a puck battle beyond the goal line, so he puts himself in Point’s path to the puck causing Point to lose momentum.

This gave goaltender Matt Murray just enough time to settle the puck down for defenseman Justin Schultz, who then found Crosby wide open for a clean zone exit.

The puck was in and out the Penguins’ zone in a matter of seconds thanks to Crosby.

In the next example we get a look at Crosby’s impressive stick work and strength.

Even though Florida Panthers forward Evgenii Dadonov dangles around him, Crosby is able to tie up his stick just enough to disrupt him from completing a give-and-go with Aleksander Barkov.

Crosby is the first one to retrieve the loose puck as he backhands it to his outlet Dominik Simon, and then they are up and out of the zone.

The next clip shows Crosby remaining on his feet along the boards after taking contact from Toronto Maple Leafs star Auston Matthews.

Crosby recovers a loose puck while using his back side to create separation between Matthews and the puck.

Then, he backhands a pass to Jason Zucker in the neutral zone and the puck is cleared.

None of these clips are flashy plays. They are just very little things that make a very big difference.

It was hard to find a single clip where Crosby did something overtly wrong in the defensive zone. I came across certain plays where he could have defended a little better, or plays where he blew the zone a little too soon, but nothing was worth sharing here.

Malkin’s play in the defensive zone isn’t as pretty as Crosby’s. While Crosby is typically stationed in between the faceoff circles, Malkin plays much more of a perimeter game in his own end. He uses his long reach and powerful stride to hop in and out of passing lanes looking to turn the puck over and head up ice.

I hesitate to call Malkin a rover, but that’s essentially his defensive game. Unlike Crosby, Malkin rarely stops and starts in the defensive zone. This allows him to keep momentum and exit the zone quickly if he forces a turnover.

Malkin relies heavily on his wingers and defensemen to knock attackers off the puck. He is very good at corralling loose pucks and exiting the zone.

He’s always on the strong side of the ice looking to stick check the puck carrier. This does lead to him puck-watching and puck-chasing a bit too much.

Below, Malkin loses a faceoff and doesn’t take his eye off the puck. This allows Carolina Hurricanes forward Morgan Geekie (who was making his NHL debut) to sneak to the front of the net and redirect a pass into the back of the net before Malkin even knew where he was.

One of my biggest frustrations with Malkin is that he is rarely physical in his own zone because he’s frequently looking to make a play with a stick check.

Below is an example of what happens when Malkin doesn’t apply pressure. In his defense, winger Patrick Marleau didn’t do him any favors by letting up on Buffalo Sabres defenseman Rasmus Ristolainen.

Instead of cutting down Ristolainen’s angle to the net, Malkin was presumably looking to cover Marleau at the top of the circles. Luckily the Penguins had both of their defensemen there to prevent Ristolainen from getting a quality shot off.

Defensive zone awareness is without a doubt the biggest gap Crosby has over Malkin.

There’s no doubt that Crosby plays a more sound defensive game than Malkin.

Malkin takes more risks and is occasionally punished for his mistakes. Crosby rarely makes mistakes, and when he does they aren’t nearly as glaring.

However, their on ice impacts are remarkably similar and it would be foolish to suggest one is clearly better than the other over such a small discrepancy.