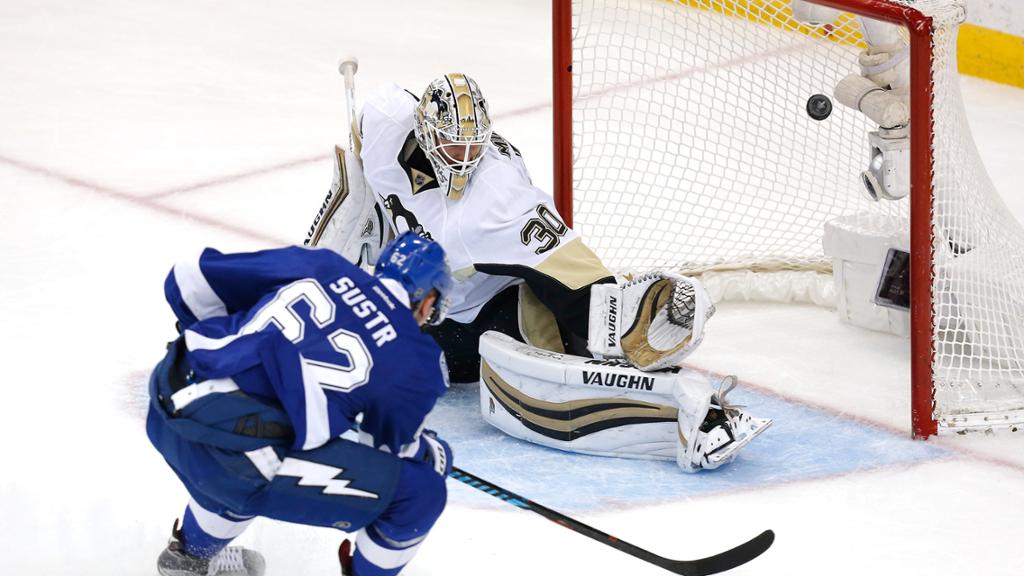 Well…I guess if nothing else you can say this Pens team is never out of it?

You give up a goal 30 seconds in and fall into a 4-0 hole, you gotta search for some positives, right?

Honestly, the 4-0 hole is more indicative of what the Lightning have been all series, and all playoffs frankly, incredibly opportunistic. The Penguins would carry play for minutes at a time and one rush down the ice it would be in the Penguins’ net.

Similar to the Capitals series, this one feels like it exists on a razor’s edge. One slip up or one off-night could spell the end of your season.

Now we’ve got a best-of-three for a chance to play for the Stanley Cup.

Please make sure your babies are in the upright and buckled up positions and get all your kidding out now, it’s real.

No need for any changes, right?

If there’s one thing you can say about Jon Cooper, dude doesn’t hesitate to put his lines in a blender.

That’s not the way you draw it up.

Tampa plays an aggressive forecheck right out of the gate and win a puck battle behind the net against Daley and Kunitz. Brown swings it up to the point to Hedman and Callahan heads to the front of the net where he gets body position and tips Hedman’s shot past Murray.

Shortly thereafter, Hagelin would take a retaliatory penalty but luckily the penalty kill stood up or this could’ve been far, far worse.

Geno Malkin, still looking like he’s poised to go off, would absolutely walk Coburn but as he’s been since Bishop’s knee exploded in game one, Vasilevskiy was there to make a save.

The penalty kill got the Penguins back on surer footing following the opening goal but they would have to go right back after having six guys on the ice.

During the PK, it was Murray’s turn to stand up.

Callahan nearly getting another deflection goal but Murray’s toe would have absolutely none of that.

When you watch hockey for so long, you develop a sixth sense of sorts. It’s not any sort of psychic ability or anything like that but for as unpredictable as hockey can be, the more things change the more they stay the same.

After watching the Penguins give up an early goal and recover from it, those that know what I mean probably felt the same way: “There’s no way in hell they make this 1-1.”

You just felt it, no?

How do you expect me to break that down? I get drunk and watch goals like that on YouTube. Dear god, that was a gorgeous passing play and display of transition offense.

As expected, the Penguins mostly carried the play the rest of the period to no avail.

The second period was more of the same. The Penguins carried the play, had two early power plays they couldn’t convert on and that feeling was back.

The feeling multiplied with just under ten minutes to go when Trevor Daley went down.

An odd collision in the corner with Callahan and Daley was unable to get up under his own weight. Looks like his ankle got caught.

Following Daley’s injury, the Penguins took a penalty. A couple of them, actually. Cullen and Boyle would have off-setting minors and Letang would be rung up for four minutes.

The PK had been solid all night, so much so that Fehr missed on breakaway and you just had that feeling again.

You just knew it…

What can you do there? Schultz and Dumoulin play this about as well as you can, stuffing Drouin’s initial attempt to work the puck to Palat and it just bounces off of every stick, skate, and leg back to Drouin and Murray is out to lunch.

Following another missed opportunity on the power play, what would ultimately be the dagger…ocurred.

Wait…there’s still an entire period of this?

Not Murray’s fault but you gotta do something.

Would’ve been easy enough to chalk this one up as an off-night and get the hell out of Tampa Bay and prepare for game five.

Not on this night.

Phil Kessel with an absolute rocket.

Fleury’s first test of the night would make or break the idea of a comeback.

Huge moment. Namestnikov scores there? Absolutely turn out the lights and get the hell outta dodge.

From there, the Penguins took over.

Just after the halfway mark of the third, there was Geno.

You give Evgeni Malkin that kind of space and time plus an open look at the net?

Nurse? I think this patient is waking up…nurse!

Right after the goal, the Lightning went to the box. Killorn trips up Letang and suddenly, you thought twice about turning this off to get caught up on Game Of Thrones.

Sheary throws the puck on net and Schultz tips it off of Vasilevskiy’s pad and Kunitz puts himself in perfect position to bury the rebound.

Oh yeah, there’s a pulse, a heartbeat, and this patient is awake.

Try as the Penguins might, they couldn’t muster the tying goal.

Turning point in the series coming up in game five.