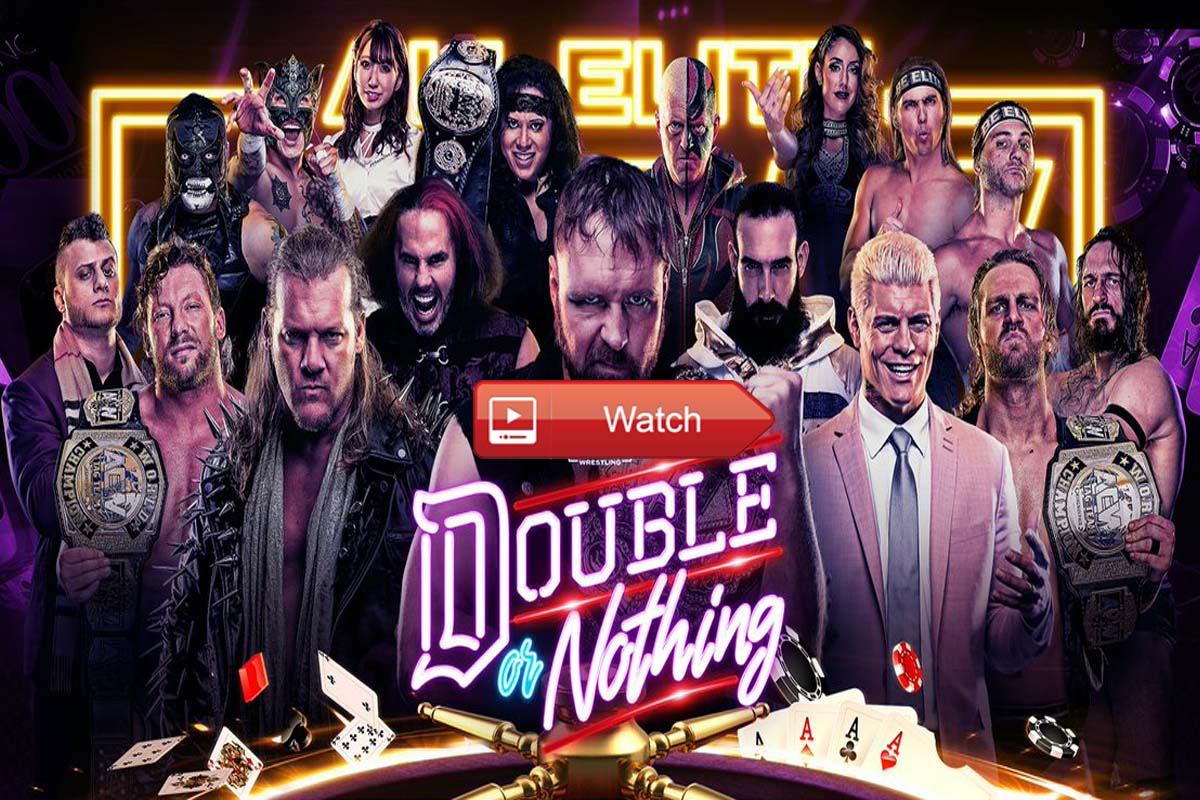 AEW Double Or Nothing took place at Daily’s Place in Jacksonville, Florida with no audience due to the current pandemic. Exciting matches scheduled were the Casino Ladder Match, Cody vs. Lance Archer to crown the first ever TNT Championship, The Elite vs. Inner Circle in a stadium stampede match and Jon Moxley vs. Brodie Lee for the AEW World Championship.

They show the opening package where they showed AEW stars thanking the first responders, doctors and nurses for all they are doing to help stop the spread of COVID-19 then showed the hype package for the scheduled matches.

Each participant in the Casino Ladder Match cut a video promo talking about why they will walk out as the winner to get the opportunity to become AEW World Champion.

.@JANELABABY cashes in with the Death Valley Driver! #AEWDoN

Dr. Michael Sampson gave an update on Britt Baker’s injury. He says her leg is broken and has a pair of torn tendons. Sampson claimed the patient was worse than the injury.  He says Britt is going to announce her return to the ring on Dynamite this Wednesday because she is a role model to her fans.

Shawn Spears came out in a suit. He says he’s here but Dustin is at home washing his tights. Dustin’s music suddenly plays but he doesn’t show. Spears laughs, trolling everyone. Shawn demands Aubrey Edwards to ring the bell and start counting. Dustin’s music plays again and Brandi came out. Her and Spears exchange words then Dustin appears behind him. He attacks Spears and the match began.

.@NylaRoseBeast is going all in! #AEWDoN

The Elite Defeated The Inner Circle In The Stadium Stampede Match

.@KennyOmegamanX and @MATTHARDYBRAND can do this all night… and YOU CAN'T ESCAPE! #AEWDoN #StadiumStampede

The Elite ended the show with a gatorade celebration on the field and fireworks going off around the stadium.

What a match, what a show. Thank you to everyone that made it possible. #AEWDoN #StadiumStampede

Overall Opinion: This show absolutely delivered. I wouldn’t say it’s the best AEW pay per view so far but it’s up there.

The Casino Ladder Match set the tone for the night. Brian Cage’s debut and his victory in the match did not really surprise me but I’m happy he’s in AEW and can’t wait to see what he does.

MJF vs. Jungle Boy was great and it was a great showing for Jungle Boy. It may have been given a lot of time than it should’ve but I enjoyed it.

Cody vs. Lance was good. I expected Cody to win it and it told a good story with Cody surviving the punishment that Lance was giving him. I feel maybe they could’ve shown a lot more brutality to Cody but what they did still worked.

Hikaru Shida becoming the champion was a shock to me. The match itself was really good and the crazy spots such as the use of the poker chips plus power bombing Shida through a table were notable spots. I’m not really sold on Shida being champion but we’ll see what they do with her title run.

The weakest match of the night was probably Kris Statlander vs. Penelope Ford. They put on a good effort but there was nothing really in the match note worthy and just felt like filler.

Moxley vs. Brodie was really good. They mostly brawled around the ring which was great since that is their strong suit. The ending was where it was getting really good when they went through the stage.

The Stadium Stampede match was without question the match of the night as I suspected it would be. The pool spot with Matt Hardy, Santana and Ortiz, changing his characters, Adam Page at the bar with Jake Hager, Sammy Guevara getting chased by Page’s horse and the golf cart, Jericho arguing with Aubrey Edwards with the replay, Matt Jackson with the Northern Light Suplexes over and over on Guevara on the field were all the most entertaining spots. I loved every minute of it.

This show was great and it was worth purchasing on Bleacher Report Live. Even though there weren’t any fans in attendance they still had AEW wrestlers and personnel as part of the audience plus Vickie Guerrero to help keep me engaged and forget there was a pandemic happening. Everyone looked like they were having fun and that is what it’s all about. Great show, overall.