The Alternate Universe: Mets at Phillies 5-26-20 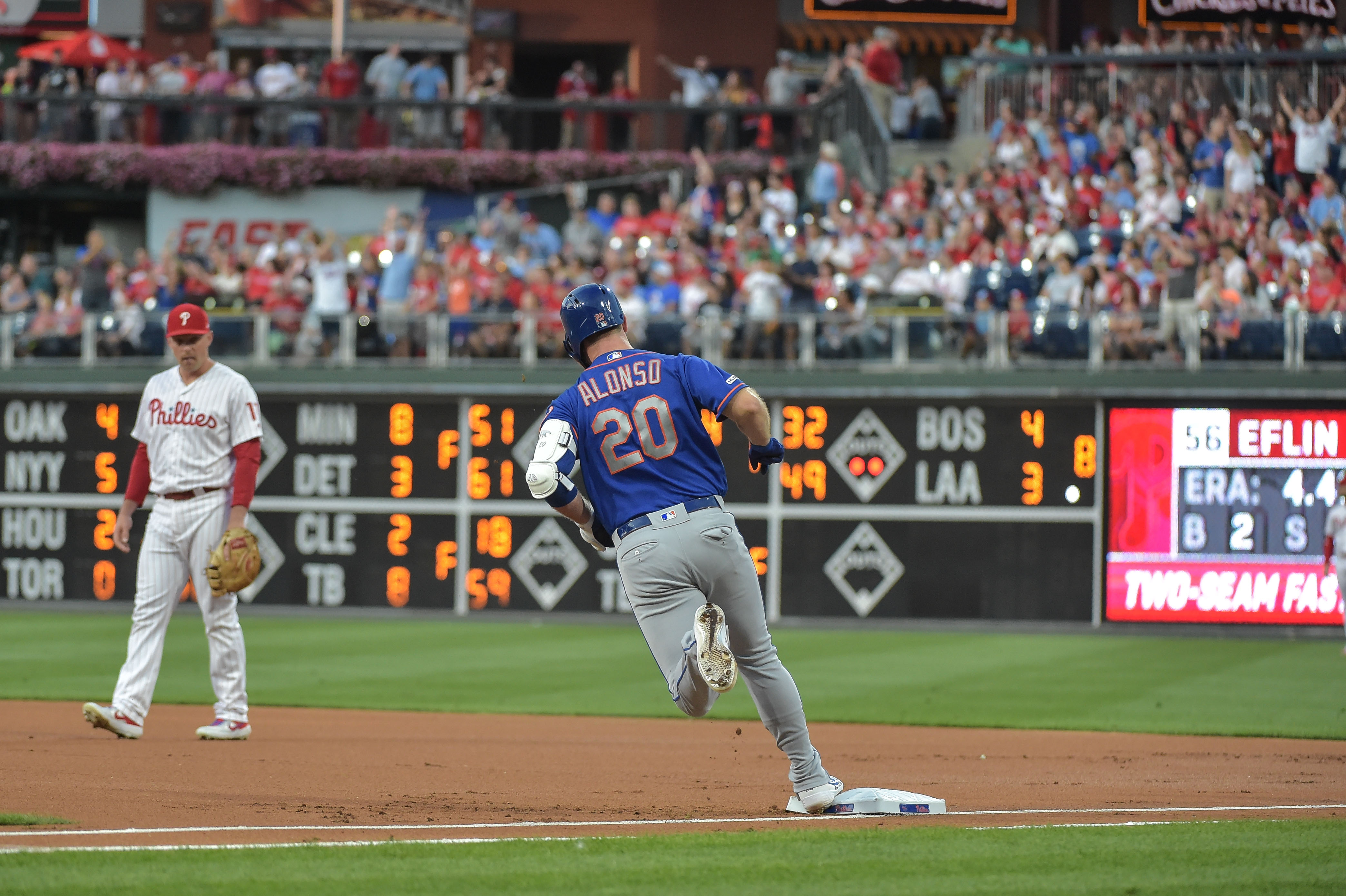 The Alternate Universe: Mets at Phillies 5-26-20

Citizens Bank Park has been the cure for what ails the Mets in the past decade or so. But the real cure is that Pete Alonso is back in the lineup after missing four games. The stat about Alonso going into this season that blew my mind is his home/road splits. How did Alonso hit only .218 at Citi Field last season? Of course, what that means is that he did really well on the road, hitting .297 with an OPS of .989 in ’19, and he returns from injury at Citizens Bank Park? Could the results here overtake the hype? It has to for the Mets to steer the ship right.

Jake Arrieta gave up singles to Brandon Nimmo and Jeff McNeil in the first inning, bringing up Alonso with two runners on right off the bat. And speaking of “off the bat”, the missile that went off his bat is on a cross country traveling expedition, and the Mets had a 3-0 lead. Feel better yet?

Well don’t get used to it, because Steven Matz started off his version of the first by giving up doubles to Andrew McCutchen and J.T. Realmuto to start the game. After striking out Bryce Harper, Matz plunked Ryhs Hoksins with a cutter to bring up Didi Gregorius. Let’s just say the ball that went off his bat is yelling “wait up” at Pete Alonso’s ball. 4-3 Phillies.

Yes, it would be that kind of night.

Matz was actually okay through the rest of his Philly experience, giving up just one more run in his subsequent five innings of work, while Arrieta gave up a two run dinger to J.D. Davis in the fourth to account for a 5-5 tie headed to the 7th. Then all hell broke loose. Pete Alonso hit a two run shot in the 7th for his second of the game to make it 7-5, but then Dellin Betances loaded the bases in the seventh to bring up Bryce Harper. Luis Rojas brought in Justin Wilson to face Harper, who smoked one to the alley in left center to give Philadelphia an 8-7 lead.

But fear not, Mets fans. Because Amed Rosario’s two run HR off Seranthony Dominguez gave the Mets a 9-8 lead. That sent us to the ninth and to Edwin Diaz, who has had his issues in Philadelphia. That trend continued as J.T. Realmuto led off the ninth with a single. Harper then laced one down the line into the left field corner. Yoenis Cespedes, in for defense for Davis, bobbled it in the corner to tempt Dusty Wathan to send home Realmuto. Cespedes unleashed a throw from heavens which Tomas Nido … also in for defense … caught on the fly just ahead of Realmuto’s spike for the out which sent the Mets dugout into a frenzy. That euphoria …

… would last one pitch as Hoskins lined one up the middle to send Harper home from third to tie the game.

Diaz struggled through the rest of the inning but escaped with his life to set up the 10th. Luis Guillorme pinch hit for Diaz and led off with a single. Rosario, who hit a big dinger in the 8th, also singled to send Guillorme to third. That brought up Cespedes against Adam Morgan.

Boom. 11-8. But that wasn’t all. Jeff McNeil doubled with two outs to bring Pete Alonso to the plate with a chance for a hattie. He sent a screaming liner to right field which landed in the first row of the stands for a seemingly insurmountable 13-8 lead. But the Mets bullpen wouldn’t be the Mets bullpen without one more scare, this time courtesy of Jeurys Familia.

Familia walked Scott Kingery and Adam Haseley to start the inning. Neil Walker singled home Kingery to make it 13-9. Then Jay Bruce, who came in for Andrew McCutchen after he fouled one off his ankle, hit a bomb to make it 13-12.

So you’re telling me that Neil Walker and Jay Bruce brought home four runs for Phillies? Oh yes I am. And at that point, I was convinced the game was over. Partly because of that 2017 karma, and partly because the Mets were down to bare bones in the bullpen. Brad Brach replaced Familia to face the heart of the lineup. Realmuto lined a single to left to bring up Bryce Harper. Now in olden times, a team would bring in a lefty to face Harper, and Luis Rojas still had Chasen Shreve in his back pocket. But Brach had to face Harper because rules is rules.

Harper worked the count to 3-2 before Brach threw him a high piece of cheese that Harper swung through for the first out. Rhys Hoskins however, singled to the right side to put runners on first and third to bring up Didi Gregorius, who had already homered off a lefty on this night which gave Rojas a little pause before thinking about Chasen Shreve for this matchup. But then he saw .091 career OBP points lower against lefties for Didi and said screw it, YOLO.

The count ran 3-2 because of course, but then Shreve got exactly what he needed, the double play ball. Cano took the grounder and flipped it to Guillorme, who had to reach down to get it, but he fired a seed to Alonso who stretched and scooped it out of the dirt while Gregorius slid, but he was called out by the skin of his teeth to prevent the Phillies from tying the game and … after a short replay review … gave the Mets a wacky 13-12 victory. It was a double play that you’re going to see a lot of in the highlights of 2020, but it happened despite so many potential pitfalls along the way. Much like this game, the denouement was a slice of beautiful imperfection.