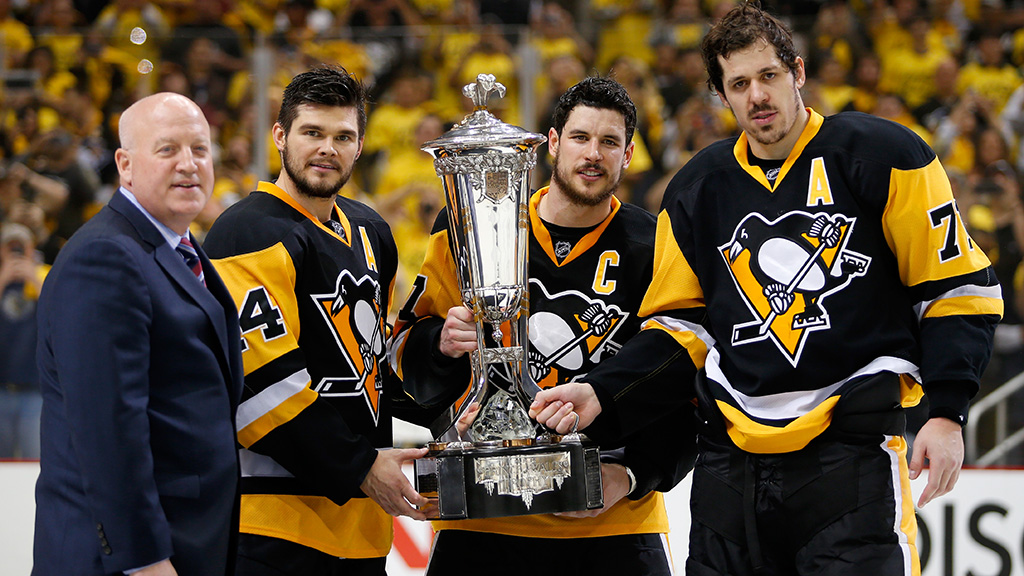 Update from present day: I took Memorial Day Weekend off from Flashback Recap.

We’re going to do two quick caps and a series breakdown today.

Shut up, I wanted cold ones.

Take it all in.

Enjoy it for a few days.

The Pittsburgh Penguins are back in the Stanley Cup Final.

With their backs against the wall in game six, the big boys showed up. Phil Kessel got the party started and then Letang and Sid joined in, building a 3-0 lead they would never relent.

Bryan Rust would extend the game six lead, putting it all but out of hand for the Lightning but that wasn’t where his heroics ended.

The Pens cruised to a 5-2 victory in game six, forcing every Penguins fan’s worst nightmare: a game seven on home ice.

That nightmare suddenly got worse when you heard one of the most prolific goal-scorers in the national hockey league was coming back, Steven Stamkos.

Bryan Rust had other plans.

Coming to a CONSOL Energy Center near you, the Jumbo Joe and San Jose Sharks.

The biggest play of the game wasn’t a goal, a hit, or a save.

It was a replay.

After Geno got stopped at one end, Tampa came right back and it looked like Drouin was poised to make Amalie Arena explode.

But wait…Andy Saucier saw a toe over the line and goddamn it, he was right. No goal.

Phil Kessel would get the Penguins on the board on a 5-on-3 late in the first.

Unreal awareness by Phil to get a stick on that.

Letang would make it 2-0 on a perfectly placed shot through a, you guessed it, Patric Hornqvist screen.

Remember a few games back I said Crosby had that look?

That, “I may never get another shot at this” motivation where he was poised to take over?

Picks up the puck after Hornqvist sweeps it away, beats Palat, Stralman, Hedman can’t catch him, and for good measure, he beats Vasilevskiy five-hole.

Brian Boyle would add two in the third to pull the Lightning to within one but with about two minutes to go, Bryan Rust delivered the dagger.

Great awareness to see he has a step on Hedman and just take off. Area pass by Kunitz springs Rust, he does a little forehand-backhand-forehand Charlie Conway and buries it.
Bonino adds the empty-netter.

This was the game the Pens had missed all series long. A four (five if you count the ENG) goal outburst while carrying the play. It never really felt in doubt even when Boyle pulled them within one.

Game sevens on home-ice are not kind to the Pittsburgh Penguins. They never have been.

Add in Stamkos’s return and a pissed off Lightning team that squandered a chance on their home ice to get to the Final, it was another recipe for heartbreak.

No goals in a tight-checking first period.

Just about two minutes into the second period, Bryan Rust eased some anxiety.

Maatta catches Tampa making a line change and stretch-passes to Malkin who drops it to Kunitz. He gains the zone and sees Rust walking right down Fifth Avenue with no one within a mile and works it to him.

The answer, Mr. Rust, is yes. You should always snipe.

Tampa would tie it before the end of the second.

Going against the grain and shooting is never a bad call but this is one you gotta figure Murray wants back. Had good sights on it, not really impeded, just a good shot by Drouin.

Not a minute later, Bryan Rust would again cement his legacy as a Penguins’ playoff legend.

(listen, you score two goals in a game seven, at home, where the Penguins constantly blow it, you get elevated, ok?)

If Murray wants the Drouin goal back, Vasilevskiy certainly wants this one back. Great tenacity to get to the cage by Rust but if you’re gonna drop down to cover it, you had better have it covered.

He wouldn’t score again but Rust probably had 4-5 chances for a hat trick.

“…and you can spit-shine your shoes, Pittsburgh. The Pens are going dancing with the lord of lords, Lord Stanley.”

3. Andrei Vasilevskiy: You face 259 shots and stop 239 of them, that’s pretty damn good for a seven-game series. The guy was under assault for pretty much seven games and he bent but surely did not break. If Tampa Bay wins game seven and moves on, there’s a legitimate case to make that it was strictly because of Vasilevskiy.

2. Phil Kessel: Once again, Phil Kessel showing the hockey world that when it matters, he shows up. Four goals, two assists, and six points in seven games is nothing to sneeze at. Not to mention, three of those four goals came at 5v5. He may run the power play but he’s effective even when we’re at full strength.

Jonathan Drouin: All he did was score this series. Four goals across seven games and all of them were big goals. For a guy that was damn near released because he refused to report to Syracuse (who could blame him) this wasn’t a bad little redemption story.

Matt Murray: The numbers are not great but rebounding to win two elimination games after getting yanked then replaced is not easy. As a rookie goalie that cannot be good for the psyche. Murray, however, saddled up and got the job done.

1. Bryan Rust: Three goals across games six and seven. Penguins had their backs against the wall for the first time this entire postseason and it’s never the hero you expect that steps up to save the day, it’s always someone you never think of, this season it’s Bryan Rust. Similar to beating the Capitals in OT was a moment that CONSOL Energy Center so sorely needed, winning the Eastern Conference on home ice in game seven, that’s a moment provided by Big Game Bryan.

Sure, the wretched Philadelphia 76ers made the whole Trust The Process thing a thing but it’s simply why the Penguins scratched their way out of this series.

Save for one game you could argue the Penguins were the better team in six of seven. They played winning hockey. They possessed the puck, they gave themselves chances to score, and eventually, they started falling.

It would’ve been very easy for Sullivan and the gang to change everything up going into game six, but there truly was no need to. Luckily, they didn’t.

In no world would the Penguins have run Tampa out of the building but outlasting them and being just a little bit better around the margins was what would give them a series win.

Pens had six players with five or more points, Tampa only had four. Once again, the Penguins’ depth was apparent and it played a role.

The series was a coin-flip. It landed on Penguins.

Can you feel it?

It’s been since May 2009 that we last had this feeling.

The days are longer, the temperatures are rising, and there are only two teams left in the NHL and the Penguins are one of those two.

In a few days, the media circus comes to Pittsburgh and the hockey world’s eyes turn to us for game one of the Stanley Cup Final.

Enjoy it, as you know, it doesn’t come around often.