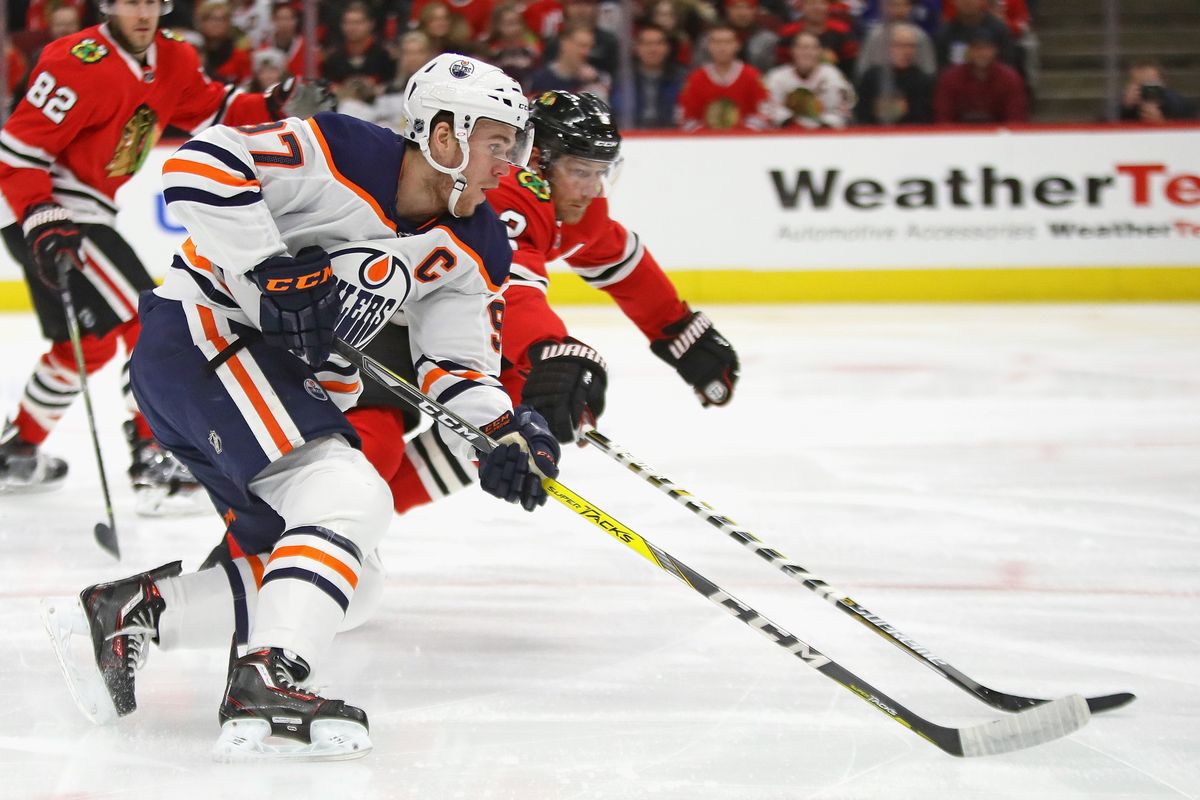 At some point this summer, the Edmonton Oilers will take the ice for a best-of-five play-in series against the Chicago Blackhawks. Should the Oilers win that series, they will advance to the Stanley Cup Playoffs for just the second time since 2006.

The Oilers finished the season fourth in the Western Conference via points, but slide to fifth behind Dallas when going by points percentage. Unfortunately for the Oilers, that’s how the NHL determined the standings for the new 24-team playoff. As a result, the Oilers were relegated from bye position to play-in position.

Their reward for a strong regular season is playing the worst defensive team left in the postseason field. The Blackhawks sold off assets at the trade deadline and had no prayer of making the field of 16 in a normal season.

This is no normal season.

This isn’t the first time that the Oilers and Blackhawks have met in the postseason. That said, it has been almost 30 years since these sides met with this kind of pressure.

The Oilers and Blackhawks met in the playoffs in 1983, 1985, 1990 and 1992. The Oilers won each of the first three series, also winning the Stanley Cup in 1985 and 1990. In 1992, the Blackhawks swept the Oilers in the Conference Finals, essentially ending the dynasty day Oilers. Edmonton would not return to the playoffs until 1997 after that sweep.

Perhaps the Oilers can deliver a death blow to the Blackhawks dynasty 28 years later. After all, the Hawks are on life support in terms of being a competitive team, having missed the playoffs in each of the last two seasons. With core guys like Patrick Kane, Jonathan Toews, Duncan Keith and Brent Seabrook getting older and less effective, perhaps history repeats itself here.

Neither of these teams are strong defensively, make no mistake. This series is going to be won on speed, skill and goaltending. If nothing else, this has the potential to be the most entertaining series in the play-in round, and it might not be close.

The Oilers had an up-and-down 2019-20 season. Although they sprinted out of the gate in October, the underlying numbers weren’t great. November was an average month, while the wheels fell off in December. Something happened on New Year’s Eve, however.

Dave Tippett put Leon Draisaitl on his own line, centering Ryan Nugent-Hopkins and Kailer Yamamoto. That gave the Oilers more depth, and as a result it made them a more potent team. In January and February, the Oilers were one of the better teams in the NHL. Not only by record, but the fancy stats backed it up. This was an actually good team.

Yes, the Oilers cooled a bit at the start of March. That said, even in a loss they played quite well against the Winnipeg Jets in the final game before the COVID-19 pause.

The stats do not tell the whole story with the Oilers. They finished with a Corsi For of 48%, good for 27th in the entire NHL. Their Fenwick For of 48.55% was better, but still not great at 23rd overall in the league.

Both of these teams struggled at five-on-five during the regular season by the numbers. There really isn’t a distinct advantage either way when looking at these numbers. (All stats via Natural Stat Trick)

Head-to-head shows the advantage is actually for Chicago. The Hawks outscored Edmonton 10-9 in the three-game regular season series, and outshot the Oilers 107-83. They took two of three games, with the home team winning all three.

When it comes to special teams, the Oilers have a massive advantage.

Edmonton’s powerplay was clicking at a historical rate, converting on a league-best 29.5% of chances. The Blackhawks, meanwhile, were just 28th in the league. They converted on 15.2% of chances during the season.

Edmonton’s massive special teams advantage extends beyond the powerplay. On the penalty kill, the Oilers finished second in the league. They killed off 84.4% of penalties taken. The Hawks were better on the PK than the PP, finishing ninth in the league with a kill rate of 82.1%.

Advantage Oilers on both counts.

The Oilers, undoubtedly, have better top-end talent than the Blackhawks. Patrick Kane and Jonathan Toews WERE the gold standard for most of the past decade. Toews has slowed down, while Kane is still a top-end player in the NHL. Neither measures up to Edmonton’s dynamic duo.

As good as Kane and Toews have been and are, they don’t match up to Draisaitl and McDavid right now.

The Blackhawks top-six forward group, at the pause, looked like this.

The Oilers, meanwhile, are likely to roll out the following top-six forward group.

The second line, meanwhile, belongs to Edmonton. Kane is still an elite player, but Nylander and Strome both have warts. Strome, in particular, is a weak defensive player.

The Draisaitl line, when put together on New Year’s Eve, became arguably the best second line in the NHL. It’s hard to argue that any line would have an advantage over them.

As for the bottom-six, it’ll be interesting to see how both coaches deploy their forwards. The Blackhawks, in their final game, used Dominik Kubalik, Kirby Dach, Brandon Hagel, Matthew Highmore, David Kampf and Ryan Carpenter.

The Oilers, on the other end, will use some combination of James Neal, Andreas Athanasiou, Riley Sheahan, Josh Archibald, Alex Chiasson, Jujhar Khaira, Joakim Nygard and Gaetan Haas.

Defensively, the slight advantage goes to Edmonton. The gap between Duncan Keith and Oscar Klefbom is NOT the mountain it used to be, and the Oilers simply have more depth at the position than the Hawks.

Chicago traded arguably their best puck-mover in Erik Gustafsson at the deadline, shipping him to Calgary.

The Oilers will be fully healthy when this series starts. Joakim Nygard and Mike Green were both on IR when the pause began, but Nygard was roughly a week away and Green was slated to miss three-to-four weeks. Both are ready to return and will be available for Dave Tippett.

The news is not as good for the Blackhawks. Brent Seabrook, dealing with shoulder issues, is done for the season. Andrew Shaw, battling a concussion, is also unlikely to return at any point during the playoffs.

Drake Caggiula (hand), Adam Boqvist (concussion), Zack Smith (back) and Calvin de Haan (shoulder) are also out injured. Both Caggiula and Boqvist are expected to be ready for a play-in series.

The Oilers are the better team when it comes to special teams, they have the better coaching and are the deeper group. Their defense is also better, and injuries should not be a factor for them. The advantage, at least on paper, belongs to the Oilers,

The one x-factor that could throw everything off is goaltending. Mikko Koskinen and Corey Crawford had similiar seasons, both finished with .917 save percentages.

Will Tippett go with Koskinen? He went with Mike Smith on opening night and rode Smith quite a bit in the second half. Although Smith brings a swagger to the team and can move the puck, his play ranged wildly between hot and cold. If Smith is slow out of the gate, the door will be wide open for the Blackhawks.

Chicago gives up the most high-danger scoring chances of any team in this 24-team playoff. The Oilers are an extremely dangerous offensive team, and have the advantage everywhere but in goal. Goal would appear to be a wash if Koskinen and Crawford were the netminders.

All that being said, Edmonton in four is the pick here for me.