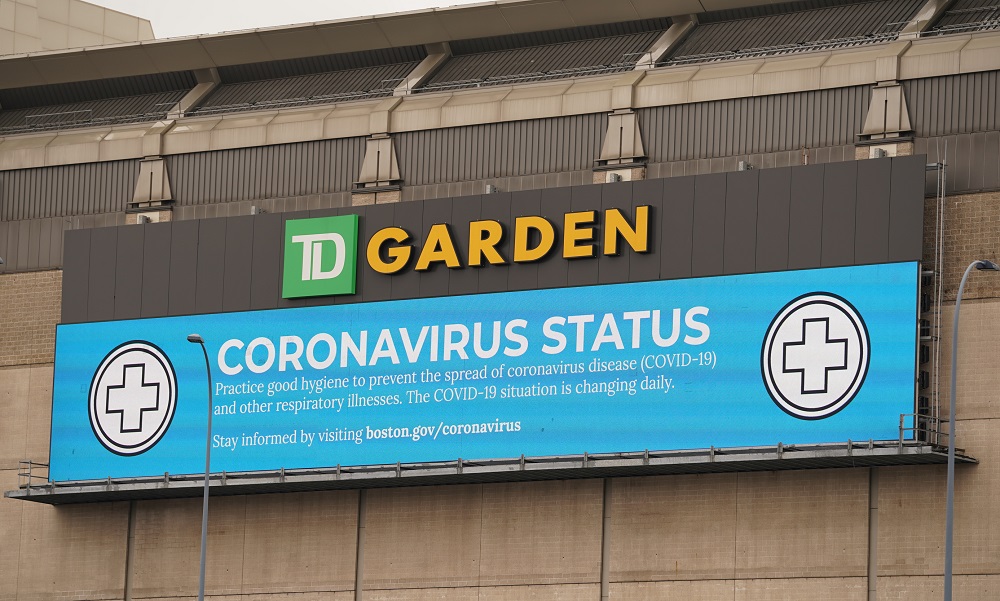 About once a week during this effing pandemic, we compile the links of the day and dump them here… highlighting the big story line. Because there’s nothing quite as satisfying as a good morning dump.

The Boston Celtics announced Friday that they will begin allowing voluntary individual workouts on Monday, June 1. In a statement, the team said it was “working in close consultation with public health authorities and infectious disease experts, and operating within requirements and guidelines set forth by the Commonwealth of Massachusetts, the City of Boston, and the NBA” in making its decision.

“We’re happy that our players will now have the option to work out individually in a safe environment at the Auerbach Center, and we hope it signals a step back towards playing basketball again,” Danny Ainge said in the statement.

The re-opening of the Celtics’ practice facility is the first step toward the return of the 2019-20 Celtics season. For this initial step, the workouts are voluntary; team medical staff will check individuals’ temperature at the door; and only four players will be allowed on the two courts (one player per half court) at any given time.

The next step can come a week from today.

“We’ve also had very positive conversations with our sports teams…” Baker said Friday. “And this order will also allow professional sports teams to begin practicing at their facilities in compliance with the health and safety rules that all the leagues are developing. Facilities are still closed to the public at this time.

These are baby steps, but they are steps. And we go one step at a time.

Which format should Boston fans be hoping for? Probably one that does not jump straight to the playoffs.

If the majority of NBA general managers have their way, the league will resume with teams playing a handful of regular season games before entering an expanded postseason.

According to Shams Charania, 60 percent of the NBA GMs surveyed by the league were in favor of a 72-game season.

Also, 83 percent supported a “playoffs plus” format that would allow teams beyond the top 16 to partake in postseason play.

An expanded regular season would afford the Celtics a chance to improve their current playoff position (No. 3 in the East) and in doing so, open the postseason with a more favorable first-round matchup.

If the playoffs started today, Boston would open up against Philadelphia, which defeated the Celtics in three of their four regular season matchups.

The Celtics’ chances of first-round success would be enhanced if they faced a Brooklyn team minus Kyrie Irving and Kevin Durant (both unlikely to play in the postseason) or possibly Orlando, rather than a Sixers team that would be led by a well-rested Joel Embiid and a healthy Ben Simmons.

The logic is sound – better to face the Nets without their stars than the Sixers with theirs. Then you remember that Caris LeVert dropped 51 in a Brooklyn win at Boston a week before the season was paused. The lesson: take nothing for granted.

My opinion: have some games that matter for seeding, in order for everyone to get themselves right for the playoffs. There’s too much at stake, too much pressure, too much anxiety for those of us who bleed green, to just start right up with the make-or-break environment of the postseason.

There are some observers who like the Celtics’ chances.

If the 2019-20 NBA season resumes, the playoffs will be unlike anything we’ve ever seen before. Might this favor a team like the Boston Celtics? It’s hard to say, of course. But ESPN’s “Get Up” crew kicked around the idea Thursday. […]

…the Celtics are young, talented and fully capable of going on a hot streak, which could serve them well when basketball returns, everyone tries to get their legs under them and unpredictability rules the day. “They have three different players on their team (Jayson Tatum, Kemba Walker and Jaylen Brown) who average 20 points a game. Two of them are very young,” Mike Greenberg reasoned Thursday. “They have 10 players on their team who average double-digit minutes per game. I love the way they’re coached, and I think that they have a superstar waiting to happen in Jayson Tatum, who if this season had played itself out I think would have played himself into significant discussion in the MVP race.”

In any event, the re-start of the season could be “just” two months away.

NBA commissioner Adam Silver and the league office informed Board of Governors that July 31 is a target date for return of season, sources tell @TheAthleticNBA @Stadium.

Silver has tried to throw a perfect game in dealing with the pandemic and he can be trusted for a quality start at least in all of his previous decisions since taking over in 2014.

In a difficult racial and social time in our country, the good news is NBA basketball is coming back and it’s been a much smoother process than baseball.

Celtics guard/forward Jaylen Brown, who earlier this week joined an NBA roundtable on the racial inequity of the response to the coronavirus pandemic, posted a video to Instagram Thursday with a message for his followers:

“Being a bystander is no longer acceptable,” he said. “If you or your friends are around, or are witnesses of cultural biases or micro aggressions, or subtle acts of racism, or actual acts of racism, and you don’t speak up, you’re part of the problem.”

Globe: Boston athletes share sadness, frustration about George Floyd: ‘I wish I could say it’s unbelievable but then I’d be lying’

Athletes are people too, and no, they will not shut up and dribble.

Boston.com: 27 little things I miss about Boston sports (Chad Finn gets it)

Globe: Having no fans in the stands won’t be all bad (Dan Shaughnessy never gets it)