A peek at Eagles' wide receivers for 2020 season 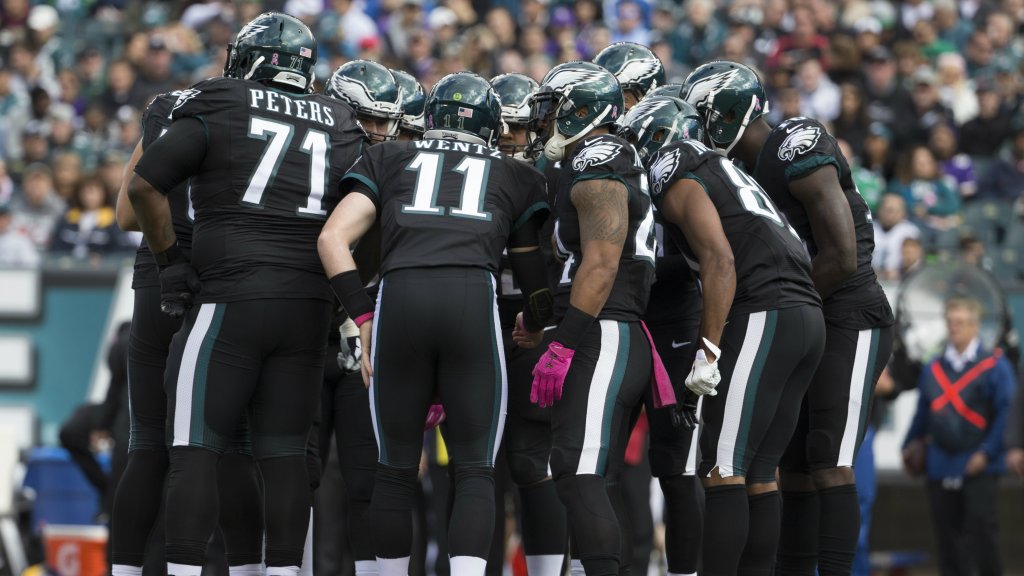 A peek at Eagles' wide receivers for 2020 season

Last season, ahead of the Week 16 match-up with the Cowboys, Colin Cowherd referred to the Eagles wide receivers as “lawn chairs and deck furniture.” While those words were harsh, he was not wrong. The team had suffered injuries to their top 3 receivers in weeks prior, and were left with a rookie and a few call-ups from the practice squad.

Coming into 2020, after an off-season focused on speed and health at the position, the Eagles must make some decisions before Week 1. Currently, there are 11 receivers on the roster, not including their recent three draft picks. I think that they’ll hold 7 receivers on their roster at the start of the season. Here are my thoughts on each players situation (in alphabetical order):

JJ Arcega-Whiteside is coming off of a disappointing rookie season. As a second round pick in 2019, he recorded 10 receptions and 169 yards in all 16 games. It also should be noted he only had 22 targets, so with more passes thrown his production should increase.

Manasseh Bailey looks to make a name for himself after going undrafted. He is an intriguing prospect out of Morgan State, where he hauled in 54 receptions for 996 yards in his senior season. He should be on the Eagles practice squad in 2020.

Deontay Burnett was activated from the practice squad before the Week 17 game against the Giants and saw action in the Wild Card Round against the Seahawks. Although he is young, 22, I don’t see him beating out any of the players the team drafted this past year.

Robert Davis was also moved from the practice squad to the active roster, after Nelson Agholor went down with an injury. I think he has the talent to be a good No. 3 receiver on some teams in the NFL, however there is just too much talent ahead of him on the Eagles.

Shelton Gibson was promoted ahead of the Wild Card match up against the Seahawks, but was only in for two snaps. With the Eagles, Gibson would struggle to get playing time, so he should be waived before this season.

Marquise Goodwin was traded to the Eagles from the 49ers during the draft. The 29 year old will look to bounce back after being placed on IR with chronic knee and ankle ailments. He should be a serious deep threat this season for the Eagles and make an instant impact.

Marcus Green signed a reserve/futures contract with the team in January. He brings an interesting skill set, having experience at receiver and running back. With OTAs and training camp pushed back, his time with the team may be limited.

John Hightower could be the Eagles “diamond in the rough” pick from this years draft. He caught 51 passes for 943 yards in his senior season at Boise State and ran a 4.43 at the combine (after putting on an additional 15 pounds of muscle). He was a productive return man in college and should look to fill that role in some capacity, as he competes for snaps early on.

DeSean Jackson looked great wearing midnight green for the first time since 2013. In Week 1 against the Redskins, he had 8 receptions for 154 yards and 2 touchdowns. Injuries shut him down one week later and he has been hard at work rehabbing all off-season. He seems eager to get back to work with Carson Wentz in 2020 and should serve as a mentor for the new draft picks.

Alshon Jeffery was the talk of the off-season and will look to prove doubters wrong this upcoming season after not being moved. Jeffery had an injury plagued 2019 season, however I believe he will return to his “bully ball” play style and put up numbers close to his 2017 season. He still has two years left on his contract, but I wouldn’t be surprised if he is moved during the season.

Jalen Reagor looks to be the young play maker the Eagles have needed at the position. He brings explosiveness, speed and elusiveness after the catch. He only recorded 43 receptions for 611 yards last season, however PFF noted that only 61.4% of passes thrown his way were “catchable.”  Reagor should look to make an immediate impact and flourish with his new quarterback.

Khalil Tate was listed as a wide receiver after playing quarterback at the University of Arizona for four seasons. He finished his college career with 2,285 rush yards. With the lack of an off-season to this point, he may struggle to make the team.

Greg Ward Jr. is the name most fans know from last year, the quarterback turned receiver off the practice squad. What he did for the team last year is hard to ignore, leading the group of “lawn chairs and deck furniture.” I think it will be hard for the Eagles to not offer him a roster spot for this season.

Quez Watkins could be the lone (drafted) rookie left off the roster come Week 1. The Eagles selected him with the 200th pick, after he ran the second fastest 40 time, 4.35, among all wide receivers. With multiple players picked at the same position before him and a return of most starters, he’ll likely start on the practice squad.

With all that being said, the team has a good mix of veterans and youth. Here is a recap of how I think it will all shake out: