Analyzing the Expected Role of Each Packers RB in 2020 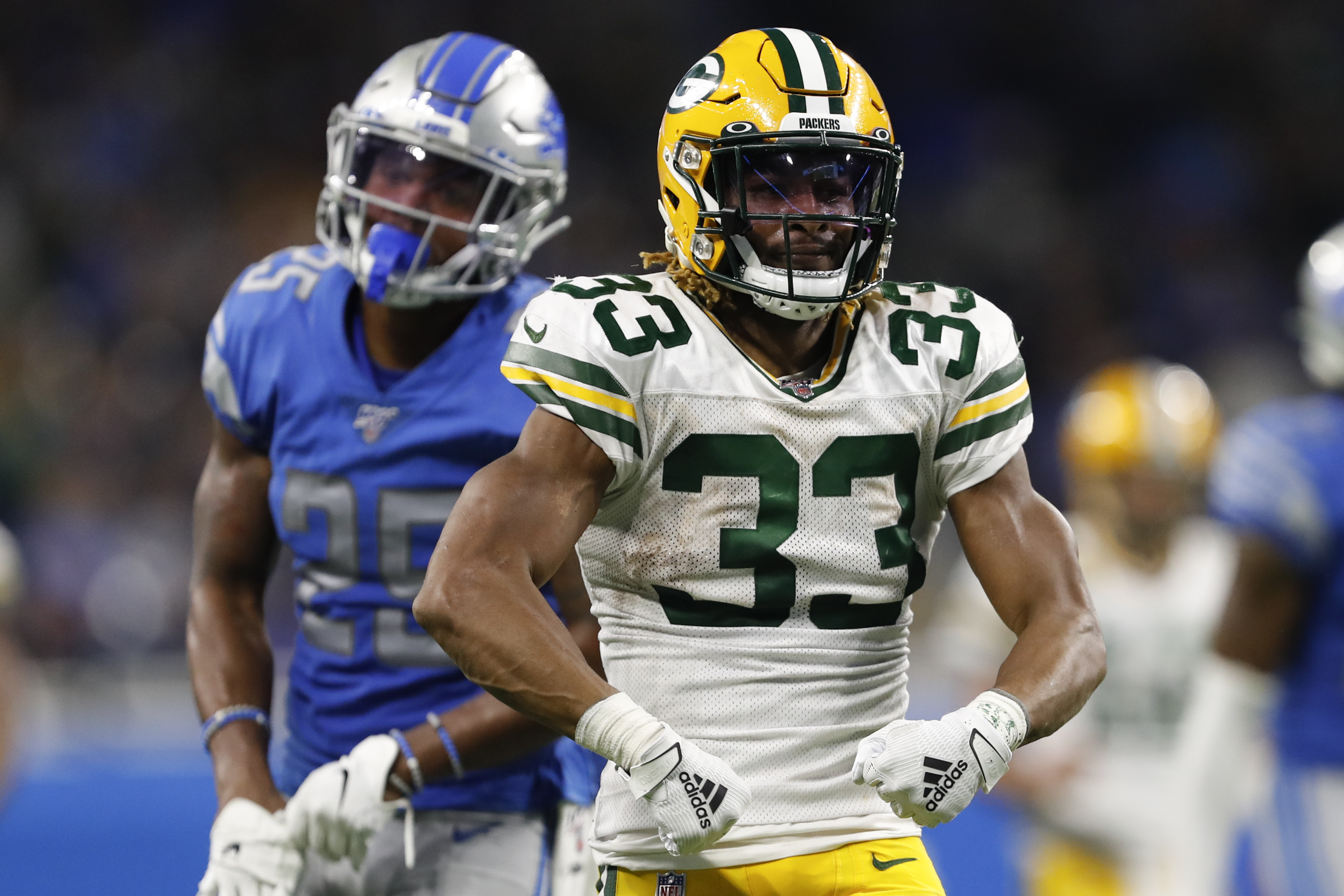 Analyzing the Expected Role of Each Packers RB in 2020

The Green Bay Packers had their first 1,000-yard rusher in five years in 2019 when Aaron Jones gained 1,084 yards. Still, the Pack drafted running back A.J. Dillion in the second round of this year’s NFL Draft. With reliable backup Jamaal Williams returning as well, how will the Packers divide the playing time at the running back position?

The Packers roster has talent and depth at this position entering training camp.

Here is an early look at Green Bay’s projected plan at running back for 2020:

Aaron Jones is in the last year of his current contract, but he remains the Packers starter and most explosive back.

Last season, Jones got roughly two-thirds of the rushing attempts by running backs and had the most productive season of his career. He gained 1,084 rushing yards and scored 16 rushing touchdowns while finishing second on the team with 49 catches for 474 yards and three more scores. His strong 4.6-yard average per carry was the lowest of his career.

Jones is a threat to score any time he touches the football. He is a quick, one-cut runner who can get to the edge and is dangerous in space.

Durability has been a question for Jones over the course of his career. 2019 was the first time Jones played all 16 games in a season although he has never played fewer than 12 contests.

Jones has worked hard to improve his receiving and pass blocking which limited his playing time early in his career.

Assuming he can remain healthy, Jones will remain the Packers primary back. His contract is up after this season so he has every incentive to have a monster campaign in 2020. Expect the percentage of carries he gets to go down slightly because of the addition of Dillon to the mix, but Jones will be a star again this season and the centerpiece of the Green Bay rushing attack.

Like Jones, Williams is entering his fourth NFL season and is in the final year of his rookie deal. He was the Packers primary backup runner in 2019, gaining 460 yards on 107 carries and scoring one touchdown rushing while catching 39 passes for 253 yards and tying for the team lead with five touchdown passes.

Williams is a very smart, hard-working player and is very coachable. He is always in the right place at the right time, knows his assignments and gets the job done. He is more of an inside runner than Jones and has some of his best games when the field conditions are wet or sloppy.

He also remains the Packers best pass blocking running back and a good receiver which means he will see the field a lot on third downs.

Williams is unlikely to see as many carries this season as he had a year ago. Dillon is likely to take away some of his workload as an inside runner as soon as his blocking and receiving skills are up to speed.

Still, barring injury, look for Williams to remain the Packers second option as a running back who will get roughly 20-25 percent of the team’s carries.

The second-round pick out of Boston College is a big load at 6’0” and 247-pounds. He was a workhorse back at Boston College, carrying the ball 845 times in his three seasons.

Scouts view Dillon as a poor man’s Derrick Henry, a back who Matt LaFleur featured when he was the offensive coordinator with the Titans.

The big question with Dillon is how quickly can he pick up the non-running parts of the game? Can he pass block well enough to stay in the lineup on passing downs? Is he a good enough receiver to be a weapon out of the backfield? He didn’t get too many chances to catch the football in college so that question remains an unknown.

Look for Dillon to take carries away from Williams and end up a close third on the team in carries. How well he does the little things and how quickly he picks up the offense will determine how much work he gets as a rookie.

Ervin was signed by the Packers in early December and played the final four games of the season for the Pack and in their two playoff games.

Ervin’s primary role will be on special teams, returning punts and kickoffs. If he doesn’t win that job in training camp, he is unlikely to make the team.

If he does win that job, however, he will likely see the field on a handful of plays each week to run gadget plays. Ervin’s speed and elusiveness make him a weapon on draw plays, jet sweeps, shovel passes and other trick plays. He can pick up extra yards once he gets into space because of his speed and ability to change directions quickly.

Expect Ervin to average a couple of touches per game if he makes the team. While he may not touch the ball often, a few of his plays could very well be memorable.

Dexter Williams showed some flashes in the preseason but his inability to pass block and run precise routes kept the coaching staff from playing him once the regular season started. The former Notre Dame star was on the field for 10 offensive plays all season, carrying the ball five times for 11 yards.

Barring injury or a big improvement in those other areas, Dexter Williams will have a fight on his hands to make the roster in 2020.

Taylor and Crockett were signed as undrafted free agents by the Packers. Taylor was a standout at Memphis. He’s coming off an injury that limited him in 2019 but if he can regain his earlier form and shows he can contribute on special teams, he may have a chance to stick on the roster or practice squad.

Crockett was signed to the Packers practice squad last October after spending time with the Texans in training camp last season and on the Raiders practice squad. Like Taylor, Crockett will need to show he can contribute on special teams to have a chance to say on the roster or practice squad.