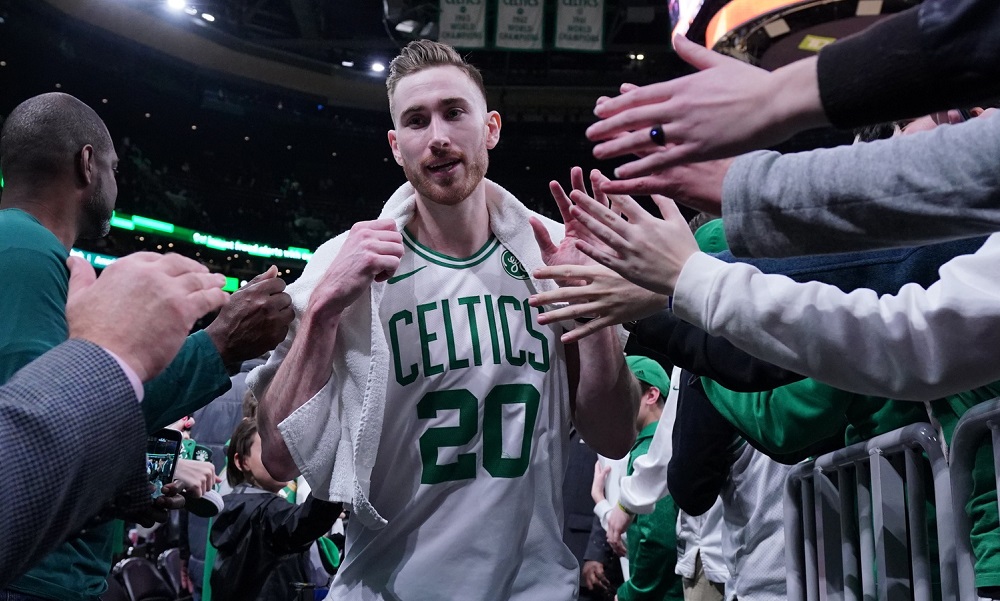 For Boston Celtics wing Gordon Hayward, this new schedule suddenly means a child who was on the way during the calm of the offseason is suddenly about to be born in the midst of a championship run. His wife, Robyn, is pregnant with their fourth child. After having three girls, the Haywards are having a boy in September, and Gordon says he’s going to be there for his son’s birth.

“It’s a pretty easy decision for me on that,” he said during a video conference with reporters on Friday. “I’ve been at the birth of every one of my children and I think there are more important things in life. So we’ll cross that bridge when we get there.”

Under the NBA protocol, a player leaving the Orlando bubble for an excused, pre-arranged event like this would have to test negative for COVID-19 every day he was gone and then return for a four-day quarantine. He would also have to test negative each of the four days in quarantine when he returns. His final test would have to be via nasopharyngeal swab, which is the deep swab up a person’s nose to the back of his nasal cavity. Only when all those steps are passed can he return to action.

MassLive: Gordon Hayward plans to leave NBA ‘bubble’ for birth of child: ‘It’s a pretty easy decision for me’

Family planning becomes yet another aspect of everyday life disrupted by COVID-19. Before March, no one expected NBA teams to be playing games in September. It looked like the best month for the Haywards to welcome the son that Gordon has yearned for (no “Daddy’s always happy” moment this time). Yet it hasn’t worked out that way.

The playoffs are scheduled to begin on August 17. If the Celtics are still playing in September, they’ll likely be in either the conference semi-finals or finals. It won’t be a good time to be without Gordon, but the good news is he probably wouldn’t miss an entire series. Let’s say he’s away for about four days, then quarantines for four more; he might miss four or five games during those eight days.

It’s not ideal from a basketball standpoint, but no one should argue about this. The birth of a child takes precedence over any career responsibilities, no matter who you are or where you work.

Boston fans should know that. In 2016, Al Horford missed a game in Miami (which the Celtics won) when his wife delivered their second child, and at least one of the usual suspects (cough, Felger, cough) slammed him for it. Most fans and sane media responded with a hearty “STFU,” and we all got back to our lives.

Bottom line for Hayward: let’s hope the Celtics are still playing when the stork comes to visit, all goes well, and Daddy returns in time to help win the Finals.

By the way, Vinnie Sex Pants is going to be a dad, too, although one with far less playing time to miss.

Additionally, Celtics center Vincent Poirier, whose partner, Assouan, is due to have their first child, a daughter, on September 17, told The Athletic he plans to do the same.

Speaking of unavailable players, news came from Indiana yesterday that directly affects the Celtics’ potential first-round playoff matchup. Pacers leader Victor Oladipo announced he won’t participate in Orlando, instead spending the time continuing to rehab the quadriceps tendon injury that has kept him off the court for all but 13 games since January 2019.

The loss of Oladipo could impact the Celtics and who they play in the first round. The Pacers and Philadelphia 76ers are both tied but the Pacers own the tiebreaker, so the third-seed Boston Celtics are currently slated to face Philly.

With Ben Simmons’ back injury back to 100% and no positive COVID-19 tests, the Sixers are poised to come out hot when the seeding games resume inside the Walt Disney World bubble. The Pacers performed well without Oladipo, but taking him out of the mix certainly hurts their chances, and could put the Celtics and Pacers on a path to a first-round matchup for the second year in a row.

The Celtics split their two games with Indiana this season, winning their last game before the NBA shut down.

When the bubble plan emerged, conversation focused on whether or not Toronto could prevent Boston from taking over the second seed. But now, assuming Indy slips to sixth, the Celts can remain in third and still avoid Philly. It’s a tough break for the Pacers, but that’s life in the NBA.

On Page 2: The sound of silence

“I played a few games overseas where we couldn’t have fans because of some violent things fans did in previous games,” Wanamaker said Friday in a video conference call. “So they banned fans because some fans got in fights before (the game). And also in high school I played a few games with no fans because the team that was our rival, the year before we played each other in the championship game and a big riot broke out after the game. So the next year we had to play with no fans. AAU basketball is very similar to this situation, too. I guess once the ball tips off it feels normal.”

What’s it like playing with no fans? Wanamaker stressed the need to bring your own energy to the court because you won’t get any boost from the crowd.

“It’s self motivation, in a way, because you don’t have the fans to get you going on a highlight play or something, so you really have to be strong within the team,” Wanamaker explained. “I think we have a good team here, and I think we have a good bond. I think that would be to our advantage.”

It’s fortunate that the Celtics have a player who’s experienced this situation. The NBA as a whole is obviously in uncharted territory, so perhaps Wanamaker’s experience will enable him to prepare his teammates. Any competitive edge, no matter how small, is helpful.

Since there’s no home court advantage for anyone, the teams that best create their own energy should be the most successful. These Celtics are a close-knit group, and being in an environment where there’s little to do but play basketball, it should be relatively easy for them to find self-motivation and focus.

And just to repeat what has been said in this space already: TV executives, please don’t add crowd noises or other BS to the telecast. Let us hear the sounds of the game, and show us pictures from some angles that aren’t available when fans are in the way. You have an opportunity to deliver some epic television. Don’t clutter it up.

And, finally… Choose your message

The list of the suggested social messages that were agreed upon by the NBPA and the NBA and then made available to players via email, per the source, are: Black Lives Matter; Say Their Names; Vote; I Can’t Breathe; Justice; Peace; Equality; Freedom; Enough; Power to the People; Justice Now; Say Her Name; Sí Se Puede (Yes We Can); Liberation; See Us; Hear Us; Respect Us; Love Us; Listen; Listen to Us; Stand Up; Ally; Anti-Racist; I Am A Man; Speak Up; How Many More; Group Economics; Education Reform; and Mentor.

The messages will be displayed above the number during the first four days of the season restart, a source told The Undefeated. Players can have a first and second choice, but they do not have to use the space for a social message, the source said. If they do not, the player’s last name would appear in that space.

After the first four nights, a player can simply go back to their last name. If they choose to continue showing a social message, their name would go below the number.

ESPN: Source: NBA, union agree to list of social messages that can be put on jerseys

Kudos to the NBA for keeping a promise to enable players to make their statements. The bubble plan was briefly delayed when some of the leaders debated if they should play or stay home to continue their social activism. This idea might be considered superficial, but it could also give each player a basis to start conversations and draw media attention to their causes.

This program should be fascinating. Enes Kanter has already said he’ll adopt “Freedom” as his message. What will others choose? Will anyone risk offending his teammates by not taking part? Will the NBA cravenly sell jerseys? We can only wait and see.

If I had a choice, give me “Ally.” As an old white guy, I’d hope to be worthy of that label.

Globe: Mass. WNBA players look to use restart as a platform for social justice initiatives