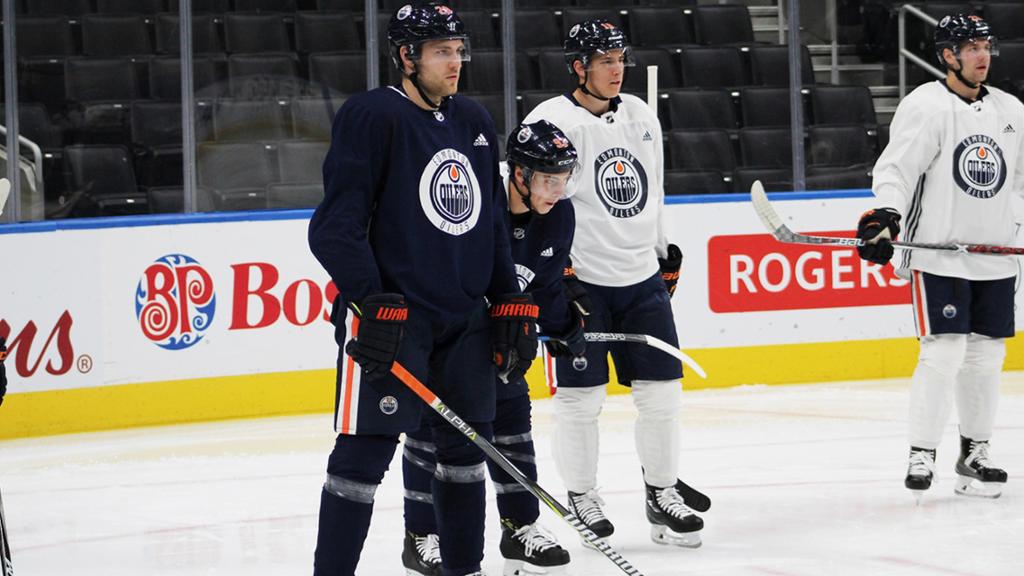 The Edmonton Oilers took the ice at Rogers Place today for day one of their 2020 ‘Return to Play’ training camp. The main group took the ice with a reminder above them, a reminder of a teammate and friend who sadly is no longer with us.

Once the Oilers got going for practice, head coach Dave Tippett wasted little time. The group was split into lines and defensive pairings, with a few surprises in the mix.

Ryan Nugent-Hopkins was not skating with linemates Leon Draisaitl and Kailer Yamamoto. Rather, the first overall pick in 2011 was seen skating with Connor McDavid and Zack Kassian.

Andreas Athanasiou, acquired from Detroit for a pair of second-round picks and forward Sam Gagner at the deadline, skated on the second line. Tyler Ennis, another trade deadline acquisition, was on a veteran third line.

Defensively, there were no surprises. The Swedish duo of Oscar Klefbom and Adam Larsson will almost certainly be the club’s top pairing when games open on August 1st.

Darnell Nurse and Ethan Bear served as the second group today, while Kris Russell and Matt Benning skated together. With Mike Green opting out on Saturday, Benning seems like a lock to be in the lineup for Game 1 against the Blackhawks.

Russell got a boost to his chances on Monday.

Many speculated on social media that Jones had tested positive for COVID-19, hence the “unfit to practice” designation. However, he has been spotted at the rink today, and is skating this afternoon as mentioned. It’s hard to imagine the Oilers would allow either to happen if Jones did in fact test positive.

It’s very possible that the young defenseman is dealing with injury or conditioning issues.

Both Mike Smith and Mikko Koskinen were on the ice for the Oilers. Olivier Rodrigue, Stuart Skinner and Dylan Wells will skate this afternoon as the extra goalies.