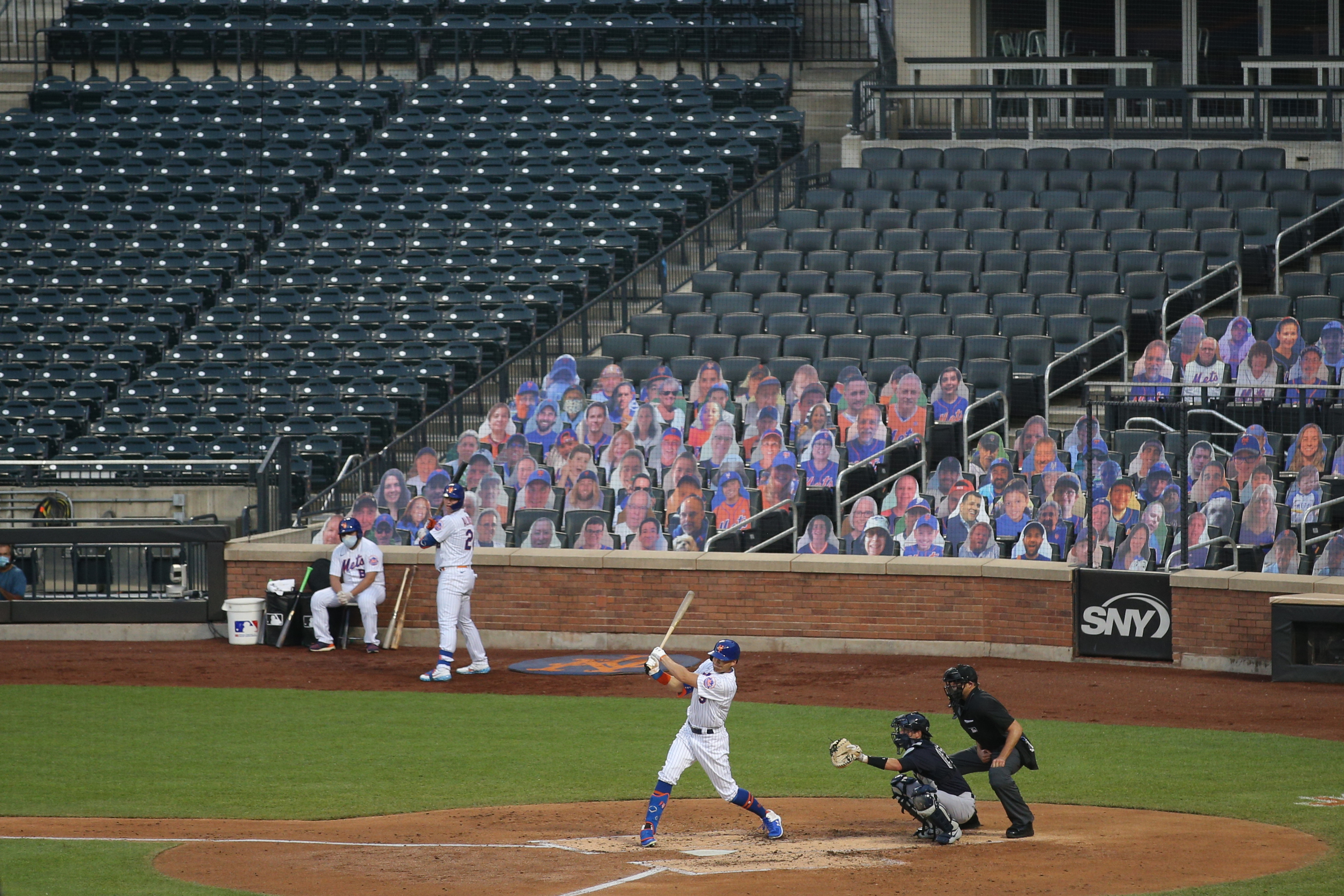 The Mets got back after it as they played a Summer Camp Training game against the Yankees at Citi Field on Saturday night. Certain things about this game and this broadcast I was used to. I watched KBO games on DVR religiously during the shutdown. (What can I say? I missed baseball.) So the cutouts and the empty stadium didn’t phase me. (The NC Dinos also had cutouts, while the Hanwha Eagles had stuffed animals in the good seats.) I thought the Mets made it a nice touch to leave some of the expensive seats empty just like in real life.

Some things, however, seemed weird. Like the pumped in crowd noise. Even with a few timing issues, it sounded okay, albeit a bit antiseptic. I mean, there’s no crowd noise button for the “Yankees suck” chant. No button to hit for all the loud-ass Yankee fans that would have been at a game like this when Clint Frazier hit a two run HR into the second deck in the fourth inning. I mean, if you want realism you’re going to have to include those things. You’re also going to have to include a button for the inevitable bad Angel Hernandez strike three calls (or bad Angel Hernandez any calls). How about the button for the heckler who would have inevitably yelled “GO BACK TO SEATTLE DIAZ” after giving up a three run home run in the ninth to JT Riddle.

Also, this was weird:

Rick Porcello was fine. Five innings, three runs, including the two run bomb to Frazier. He struggled at the start, seemed to get it together near the end. He was a central figure in the other weird thing of the night that we’re all going to have to get used to, and that’s the fact that Porcello didn’t have an at-bat. It took me until the 8th inning to realize that holy hell: There’s a DH in National League games now.

(For the record, I’m content with the DH in the N.L., and I’m a life long fan of the National League style of play. But it has infuriated me for the last 20 years to see generational talents like Edgar Martinez and David Ortiz thrive in the A.L., while players that don’t really have a position for N.L. teams have to be traded away. It’s totally frustrating that N.L. teams don’t have the same opportunity/luxury to build their teams in the same way that A.L. teams can, which is probably why the A.L. has been so dominant in regular season interleague games since it’s inception. So while I’m wistful for pitchers hitting and for the extra layer of strategy, uniformity for all teams is of greater import. and unfortunately it’s much easier to add the DH to the N.L. than to take away the DH from the American League, the minor leagues, and college and high school baseball. So bring on our new overlords: National League designated hitters.)

J.D. Davis and Pete Alonso drove in runs with a double in the fourth and a single in the fifth respectively. The Yankees scored a run in the sixth when third baseman Max Moroff threw multiple grounders away to set up an RBI ground out to Moroff that did not come with a sacrastic cheer from the crowd  … mainly because they haven’t put that button in yet. But give Jeurys Familia credit for getting a ton of ground balls in that inning.

Dellin Betances didn’t have a great inning in the 8th. He gave up a leadoff single, then a rocket to left center that Ryan Cordell made a great running catch on to bail him out, then threw a pick off throw away before Pete Alonso bailed him out by nailing the runner at third base. He then got out of the inning by getting Giancarlo Stanton on a harmless ground out. It was a circuitous route to get three outs on three batters, but whatever works at this point.

Edwin Diaz started the ninth, threw 15 pitches, got victimized by shoddy defense and a Texas leaguer, then was pulled for Daniel Zamora (yes, he’s still on the team.) Zamora promptly gave up two singles to give the Yankees a 6-2 lead which were cruelly charged to Diaz. Zamora then gave up two more runs before ceding to Ryley Gilliam, who gave up a sac fly to put the cherry on top of a five run ninth to put the game out of reach. So even though things might be weird, the Mets giving up five runs in the ninth shows us that things can be normal, too. (That, and our continued hatred of the Kars 4 Kids commercial, renewed tonight.)

Look, it’s better than the alternative.

So the Mets lead off the two game exhibition season with a 9-3 loss. The second game of the home and home against the Yankees is tomorrow night. Hopefully, some other players can take a rest without everybody trying to guess as to whether they have COVID-19 or not. Because that’s going to get old fast.