Rapid Recap: In the bubble, Celtics start slow, fall to Bucks in first game back 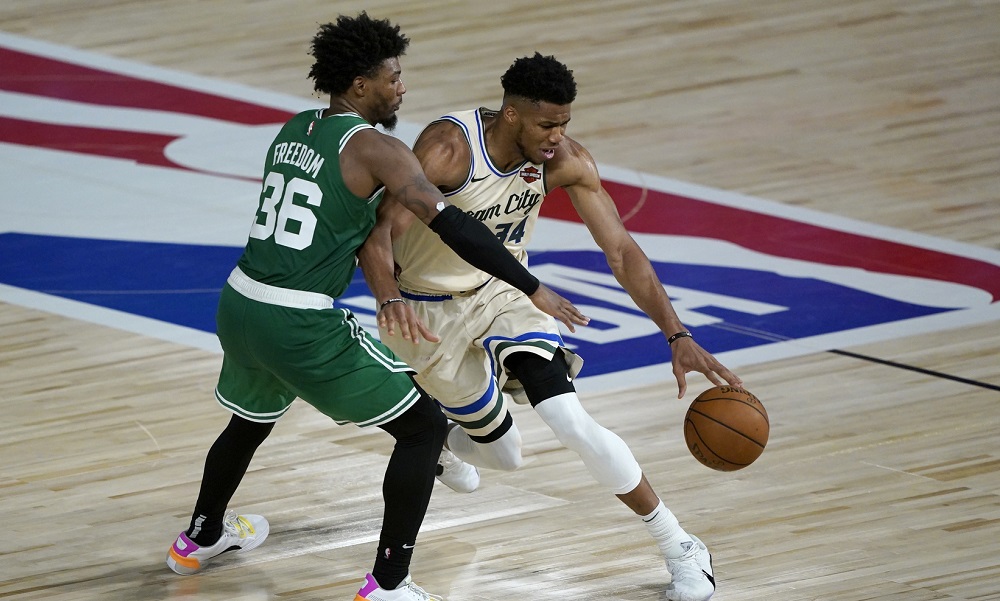 Rapid Recap: In the bubble, Celtics start slow, fall to Bucks in first game back

It was time to spread the word, the Celtics resumed their season last night in the NBA’s bubble.

The teams joined forces to kneel during the National Anthem.

All members of Bucks & Celtics, plus 2 of 3 referees kneel during National Anthem demonstration pic.twitter.com/kZP2tkMsdr

The Bucks were on fire before the Celtics even woke up. It was 17-2 after 4 minutes.

When Giannis went to the bench, the Celts began to play defense. Boston closed to within 2 points before Milwaukee stabilized it after 12 minutes.

Celts got back to within 34-33 before the Bucks got hot from three and rebuilt a double-digit lead. Smart was making plays, though.

Smart also guarded Giannis effectively, and fortunately dodged a potentially serious shoulder injury when Giannis fouled him over the back.

The Celtics struggled for the entire first half, got nothing from The Jays, and never had a lead, but somehow – largely thanks to Smart – were still hanging around.

The #Celtics should feel pretty good about being down just 64-58 at the half to a #Bucks team that has led the entire game thus far.
⬆️Giannis Antetokounmpo 16 pts, 10 reb
⬇️Jayson Tatum 3 pts (1/7 shooting)
⬆️ Marcus Smart 12 pts
⬆️ Khris Middleton 15 pts, 5 assists

Smarf is our best player and the Lord of Death

Third quarter was more of the same: Celtics would get close, Bucks would pull ahead again. Jayson was missing the rim on layups and Jaylen picked up his 5th foul with 8:30 left in the period.

Brown's foul trouble and Kemba's minutes limit putting C's in a dicey spot now on offensive end with this lineup.

Smart scored 8 straight – tip-in, layup and-one, trey – to give the Cs their first lead of the night, 83-82. And Tatum finally made a shot.

Celtics-Bucks tied at 87 after three.

The refs were erratic all night. Even sweetheart Abby couldn’t take it.

How is there no whistle on the strip of Jayson Tatum?!?

Also, how nice is it to be pissed about bad calls again?!?

Bucks crept back ahead until the Celts had a 10-2 run, capped by this.

Marcus Smart tries to draw the charge on Giannis. Was he still in the restricted area, though? (via @ESPN) pic.twitter.com/fzalEI0OyW

…but it was reviewed.

And now the call has been overturned — and Giannis both stays in the game AND gets an and-one. Huge swing.

Smart’s feet were both outside the circle, so how that wasn’t a charge was a mystery. Then, after a Celtics miss, Khris Middleton hit a 3 and that put it out of reach.

#Celtics lose to #Bucks 119-112. The play that will be discussed is the overturned charge call. But BOS has to be pleased with performance despite Kemba on a minutes limit and Tatum 2-for-18 FG