d'Arnaud Is French For "We Suck" 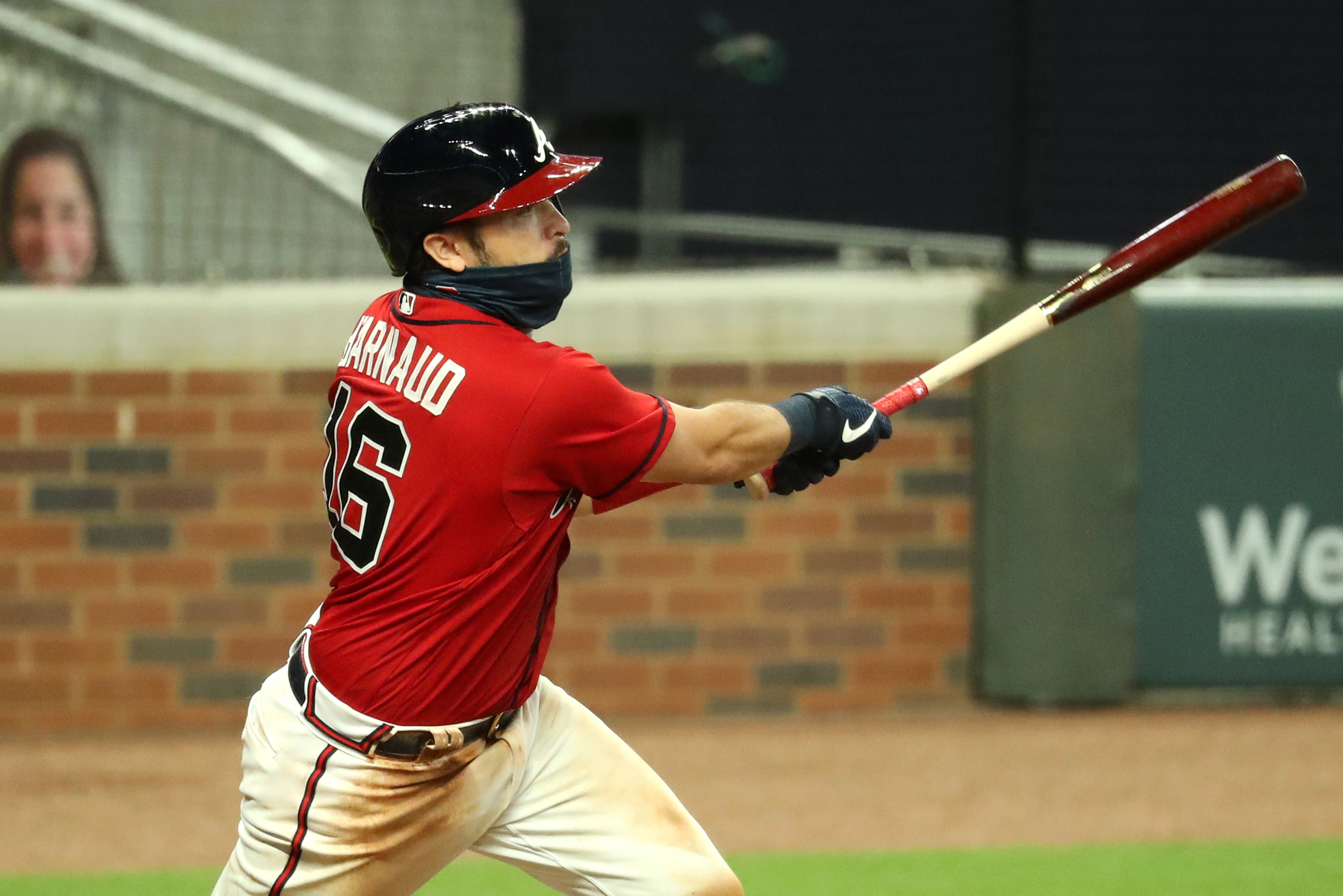 d'Arnaud Is French For "We Suck"

It might have been totally by luck and not at all by design, but when Matt Adams laid bat to ball and went against the shift to bring home a run on an opposite field single in the first inning to make it 2-0, I really should have taken that as my first hint that things were not going to go all that well on Friday.

But that thought was pushed to the recesses of my mind, tucked well behind the litany of horrible Mets losses as they scored six runs in the fifth inning to make it 8-2. Robinson Cano had two hits, including a leadoff home run, and the Mets scored four runs with two outs on a bases loaded walk to Michael Conforto, a two run double by Yoenis Cespedes, and a single by Cano. The biggest itch on the Mets was clutch hitting, and it was soothed for the moment by a good dose of calamine lotion.

But then the bottom of the fifth came, and the Mets almost gave it all back. Rick Porcello walked Dansby Swanson on four pitches, and then got Freddie Freeman to fly out to left except that J.D. Davis dropped the ball and there were runners on first and second with nobody out. Luis Rojas then replaced Porcello with Paul Sewald, and after he got a pop out from Marcel Ozuna (which Amed Rosario had some trouble with but caught it), Sewald gave up a double to Adams and a single to Travis d’Arnaud (remember him?) to make it 8-4. Then, Sewald got a 5-4-3 double play ball from Austin Riley, but Cano threw the turn away to make it 8-5, and at this point I’m thinking that nine James Hardens playing defense against Giannis, Kyrie, and Mason Plumlee might be a better option than what the Mets were throwing out there.

But the Mets came right back and got a home run from Rosario and an RBI single from Davis to make it 10-5, and Chasen Shreve gave the Mets a serviceable outing, striking out five in two innings while keeping the Braves at arm’s length only giving up a run to go into the 8th at 10-6. That’s where it all came apart.

Shreve’s two innings put the Mets in a great position with Dellin Betances and Seth Lugo set up for the 8th and 9th. But Betances has been very shaky this season, and whether Lugo pitches one inning or two, he’s probably not available on Saturday. So knowing that, Lugo has to be up throwing in the bullpen much sooner than he was. Sure enough, Betances gives up a single to Adeiny Hechavarria and walks Dansby Swanson, and Lugo has to be ready to face Acuna at that point. Porcello got pulled in the fifth inning after an error, but then you leave in Betances in that spot?

So Betances strikes out Acuna, and now Lugo is warming up. But Swanson singles off Betances to make it 10-7, and then he walks Freeman and in the process throws a wild pitch to score a run to make it 10-8. So now Lugo comes in to face the go-ahead run. Now maybe Lugo’s struggles make this whole argument moot, but having your best reliever coming in with the tying run on deck is a lot different than bringing in your best reliever with the tying run on base. Perhaps the result is a little bit different, perhaps not. But this isn’t a mistake Luis Rojas (or Brodie Van Wagenen) can make in the future … not when Betances hasn’t thrown a first pitch strike all season.

So in comes Lugo. He walks Ozuna but gets Johan Camargo to fly out for the second out. Now he faces Travis d’Arnaud, already with two RBI, with the bases loaded. He goes 1-0 on Travis, then threw a pitch right on the outside corner. A pitch in this location was called a ball when Porcello walked d’Arnaud in the 4th, which was right before he got pulled.

But that same pitch was called strike three for Jhoulys Chacin in the top of the fifth to J.D. Davis.

So look at the middle pitch to d’Arnaud:

Jesus Christ, Mark Wegner! Bad umpiring is bad enough. Inconsistent umpiring is the absolute worst. And it seemed as if every time the Mets got one of these strikes called balls on Friday, they threw a meatball on the very next pitch. It didn’t seem that way against d’Arnaud … it was that way.

I didn’t realize that this was the first time d’Arnaud ever faced the Mets. But fitting that his first game as a Mets opponent would end like this.

The Mets got the tying run to scoring position with two outs in the ninth, but Wilson Ramos flied out to right field to end it, and the latest gut punch loss, the first one in just over 24 hours, was complete. Rob Manfred could expand the playoffs to 26 teams and at this point the Mets would still finish behind the Buffalo Blue Jays, the Marlins who are currently throwing baseballs to mattresses in a Philadelphia hotel room to keep warm, and the 1949 St. Louis Browns, who are all deceased except for George Elder, who is 99 years old and could probably still work out a walk against Betances. Meanwhile, it is confirmed that the four horsemen of the 2020 apocalypse are Matt Adams, Travis d’Arnaud, Mark Wegner, and the kid in the cutout behind home plate with the “faux-hawk”. Because I’m sure he’s responsible for some of this.