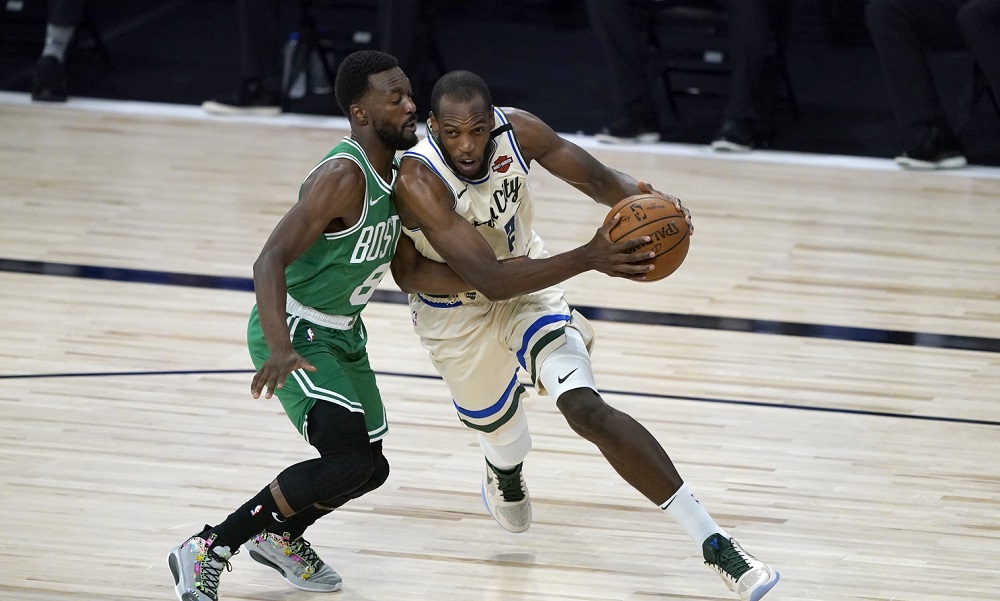 In their first game in the Orlando bubble, the Celtics trailed the Bucks for probably 90% of the 48 minutes, yet after they had lost it felt like that was the wrong outcome. As usual in a close contest, if a play or two had gone differently, we’d be in a better mood right now.

Here are some thoughts about it.

Jayson Tatum is used to points coming easy to him.

But his first “basket” in Boston’s matchup with the Milwaukee Bucks on Friday night could not have come any easier.

A Celtics miss was tipped in by a pair of Milwaukee players, with Tatum being the nearest Boston player and thus, got credit for the basket. […]

The Celtics All-Star has had plenty of memorable games this season, but this one stood out for all the wrong reasons. Tatum scored just five points while connecting on just two of his 18 shot attempts, one of which was a basket he was credited with after a pair of Bucks tipped in a Celtics miss.

Early this season, slow starts were an issue for the Celtics. That problem reemerged as the Cs missed their first 6 shots, falling behind 17-2. That’s a deep hole to put themselves in against any opponent, but especially the league’s winningest squad.

That problem persisted throughout the 48 minutes. The team stats were remarkably even in all categories except shooting: the Bucks made 46.4% and the Celts only 40.7%. If Jayson had made even 5 or 6 of his 18 shots, that could’ve made the difference. It’s a shame because Khris Middleton was not his usual Celtics-killer self – he scored just 18 points on 6-of-20 shooting and missed several wide open looks.

You may have forgotten (because it seems like years ago now) that Tatum had a 1-for-18 stinker for 5 points in a home win over Dallas in November. But JT had scored in double figures every game since, and after his breakout month following the All-Star Game, our expectations soared. He’s not to blame individually for the loss last night, but the Celtics can’t be elite unless Tatum is too.

Marcus Smart vs. Giannis Antetokounmpo might be something to try.

As always, we need a caveat here: The goal against Antetokounmpo is to guard him with one player without giving up a 50-point night, not to stop him entirely. Antetokounmpo can’t be stopped entirely.

Smart will always give it his best shot, however, and he pesters Antetokounmpo better than just about anyone else in the league. Additionally, having Smart guard Antetokounmpo could allow the Celtics to play their Best Five lineup against Milwaukee — Brook Lopez can post up, but he can’t really be asked to do it all game and keep the Bucks’ offense efficient.

The only counter: Smart is always willing to give up his body for charges, which only happen when he is the help defense. Still, the Celtics would probably trade those charges for all the other benefits.

Marcus was easily the best Celtic on the floor, despite being physically pounded: he was crushed to the floor on a rebound and might’ve separated his shoulder; was kicked in the balls; drew a charge on Giannis; and took a shoulder to the jaw while setting a pick. Yet he scored a team-high 23 on 7-of-11 from the floor. Among those were 8 straight Boston points late in the third to give the Celtics their first lead of the night.

In three meetings this season, Smart has guarded Giannis on 42 possessions and allowed 18 points. He makes the MVP work hard for his points, not an easy task when Smart gives up 8 inches and 20 pounds.

The biggest development from this game was that Kemba Walker seemed to have his usual burst and was moving quite well on his troublesome left knee. He showed off step-backs and stop-and-go moves and did not appear to be limited or in any pain. Stevens said before the game that the All-Star would be limited to 14-20 minutes, and he ultimately played 19, finishing with 16 points on 5 of 9 shooting. He sat for the entire fourth quarter.

Globe: Observations from the Celtics’ loss to the Bucks in their first game of restarted season

A healthy Kemba is crucial to Boston’s playoff hopes. Best to manage his playing time, even though he was unhappy about it. Smart picked up the slack in scoring, and Brad Wanamaker did too, with 14 points and 6 rebounds.

Jaylen Brown was just 1-of-4 from the floor in the first half, and then got his 5th foul early in the 3rd quarter. But he bounced back and finished with 22 points.

Despite Kemba’s low minutes and JB’s fouls, Brad Stevens used what amounted to a 7-man rotation. Enes Kanter, Semi Ojeleye and Grant Williams played only a combined 30 minutes and scored 2 points total. Semi did have this one nice effort on the save.

Brook Lopez scored 14 with 6 blocks for the Bucks, but Daniel Theis offset that with 13 points and 12 rebounds. Gordon Hayward had 17 points, 9 boards and 6 assists, a solid performance, although with Kemba sitting and Tatum clanging shots, it’s too bad Utah Hayward didn’t show up.

On Page 2: Who let the refs in the bubble?

The turning point last night was with 1:28 remaining and the score tied. It looked like Smart had drawn a charge on Giannis, which would’ve been his sixth foul. Not so fast, kids. On replay review, the call was overturned, Giannis completed the 3-point play, and when Middleton followed with a triple, the game belonged to the Bucks.

The officiating for the game was almost even; each team shot 34 free throws, and Boston was called for 28 fouls to Milwaukee’s 26. But the Celtics felt they got a bad whistle because they shot just 5 FTs after halftime and several crucial calls down the stretch went to the MVP. If any one of them had gone the Celtics’ way, they might’ve come out with the win, but that’s just not how the NBA works. Superstars get the calls, and everyone knows it.

Below are three disputed plays that happened in the final 6 minutes:

Video review but no call made (Giannis now with 5 fouls).

This was not viewed as a hostile act nor was it called a common foul on the floor. Between the no calls of @Giannis_An34 jumping on top of @smart_MS3 in the first half and this, it is clear the @NBA has issues officiating its stars. pic.twitter.com/yJIpO3NRok

Marcus Smart tries to draw the charge on Giannis. Was he still in the restricted area, though? (via @ESPN) pic.twitter.com/fzalEI0OyW

This is a little bit of a ref show and no one like this.

Celtics take five free throws in the second half and Giannis gets two overturns to stay in the game.

Giannis has 36 points, six coming after he fouled out for the second time.

It’s truly remarkable that the NBA can move all its teams to one city, eliminate fans, basically overhaul standard operating procedure yet officials still know their role and that’s to protect the best player on the court. It’s embarrassing.

He just got his 7th foul

Afterward, Marcus and Giannis both had their positions staked out.

Marcus Smart on overturned Giannis foul: “Their excuse was I was late. … Frankly, I think we all know what that was about — Giannis” would have picked up his sixth foul.

Informed of Marcus Smart's postgame comments about Giannis staying in the game because the refs didn't want him to foul out, Giannis said that's his opinion and then went on to praise Smart and speak at length about how much he respects him and his game.

This could be a great playoff series.

There are two sides to every story, especially concerning referees’ calls. Here’s a mid-game tweet from a random Bucks fan.

This is an incredibly dirty play by Marcus Smart grabbing Giannis’ arm and yanking him to the ground. This could have caused serious injury and he should be suspended. pic.twitter.com/l0TwkaBK02

What? On the play, Giannis was called for an over-the-back foul, and Smart said later he feared he’d broken his shoulder when he hit the floor. Everyone walked away from the wreckage, but this tweeter – and numerous other Bucks fans who replied – looked at this video and decided that actually Smart had committed the foul, and he’s the dirtiest player alive. Their MVP wouldn’t hurt a fly.

I wonder what flavor is the Kool-Aid they drink in Milwaukee?