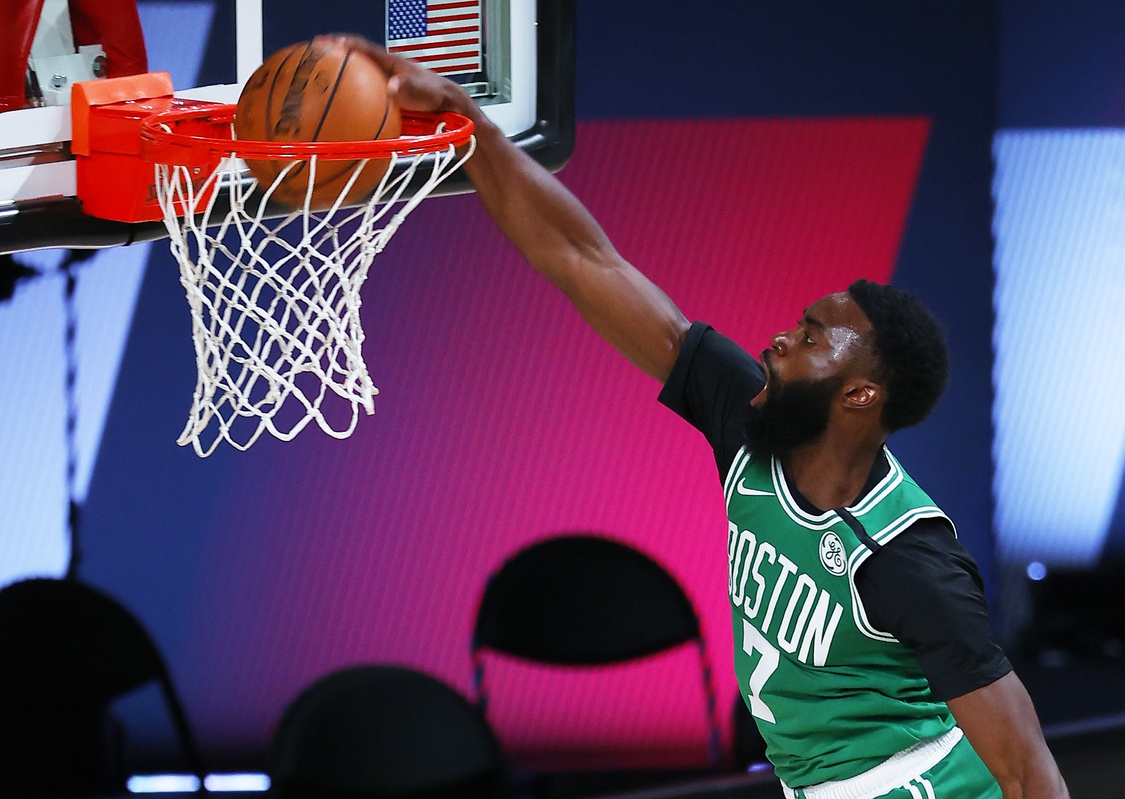 After the sour ending of Friday’s game against Milwaukee, the Boston Celtics were certainly hungry for a win. The Portland Trail Blazers were ravenous for one, given how precarious their playoff chances are. So it wasn’t surprising that the Celtics started the game white-hot or that the Blazers stormed back from a 24-point deficit and almost won. Boston narrowly sealed the 128-124 W with clutch buckets and free throws in a drawn-out-to-all-hell final minute.

Jayson Tatum looked like his old self with a massive 34-4-8-2-1 final line, putting in work to build the big lead and bring it back from the dead. Jaylen Brown was solid for the first three quarters and monumental in the fourth, getting buckets when nobody else could and ending with 30-6-1-2. And while Gordon Hayward didn’t shoot a ton, he was efficient (6-10 FG) and kept driving and picking up free throws to rack up 22 points alongside 8 boards, 3 assists and a steal.

Kemba is a godsend

Portland came out swinging with their chief advantage over Boston—size, in the form of the resurgent Jusuf Nurkic. But Kemba and Hayward quickly roared to life and established control over the proceedings.

Kemba looks so good I can't stand it pic.twitter.com/XK91CBNXd8

75 percent shooting (9-of-12 FG) for Celtics over first eight minutes of this game. Just getting whatever they want right now.

That was pretty much the story for the rest of Q1 as well, which the Celtics closed out 37-24 in their favor. (And it was truly relieving that Tatum scored more points in the frame than he did in the entire Milwaukee game.)

It helped that in addition to not shooting well in general, the Blazers were taking bad shots:

Difference in the #Celtics game right now – check out how many midrange 2s Portland took compared to how many the Cs took. pic.twitter.com/f99unjgebb

Within just four minutes of the second quarter, continued hot shooting from Tatum—who wanted to burn the memory of his Friday woes out of his head as much as fans did—and the team as a whole turned the Cs’ existing lead into a 20-point advantage.

JT's not messing around 🔥 pic.twitter.com/HKpLK8HVsK

The Blazers, meanwhile, couldn’t manage with the Celtics collapsing on Lillard and McCollum and subsisting only on the scoring Nurkic provided, and their size didn’t mean much with Carmelo Anthony unprepared to defend Tatum and Hassan Whiteside unable to keep up with Enes Kanter. (I wouldn’t have put that last bit on my bingo card a few years ago. How times change.)

The dynamic established in Q1 didn’t look likely to change early in the second half. Who was a big part of that? Three guesses and the first two don’t count:

my understanding is that, jayson tatum.

Tatum is going off 🔥 pic.twitter.com/1heCe0bXdK

Tatum, Hayward and Kemba a combined 11 for 13 on three-pointers. That'll generally be OK.

And Jaylen gave us this gem in the third quarter:

Things got out of hand toward the end of the frame, in the sense that the Celtics’ 20-ish point lead shrank to 10, and then into the high single digits.

Now Damian Lillard draws a four-point play on Marcus Smart, and the Blazers are within six. Wild turn of events here.

Celtics really have stopped moving the ball. They're settling a lot and all those easy baskets from the first half are basically gone

This is why you never rest on your laurels, fellas!

Lillard is a superstar for a reason, and his wretched first-half performance was, unsurprisingly, an aberration. In the final 12 minutes he decided to make life really difficult for the Celtics:

Three triples to open the fourth quarter for Portland and the Celtics 24-point lead is down to 1.

And then the lead was kaput. I will take being beaten by Lillard, McCollum and Nurkic. When you start ceding the three-point line to random dudes like Gary Trent Jr., then I get mad. Dude finished the game with 21 points! (Lillard ultimately racked up 30, as did Nurkic; McCollum only got to 17.)

Persistent aggressiveness from Tatum, Hayward and Brown brought back the lead for the Celtics and ultimately put them in position to win. But it was on a razor-thin margin and never should’ve been. That in itself is alarming.