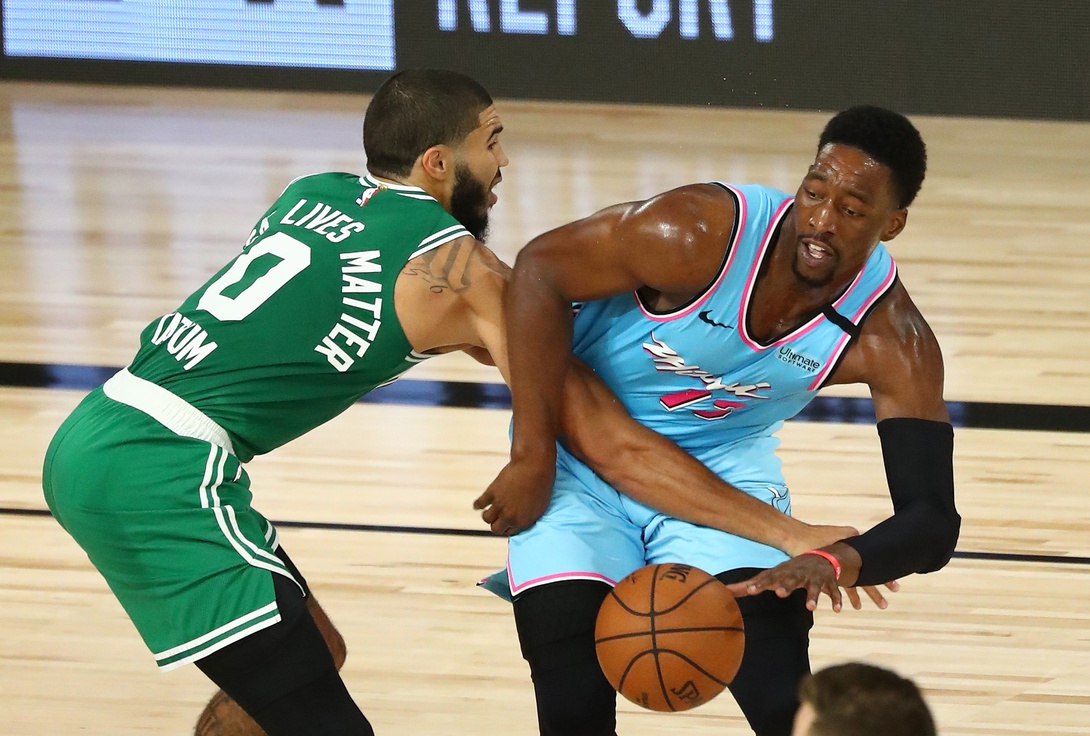 If you have to play a well-rounded team like the Heat, always best to do so when they’re down Jimmy Butler…right? Not so for the Celtics tonight. Unable to get in an overall offensive groove, a combination of eagle-eyed Heat shooting, arbitrarily intense officiating (39 free throws to Boston’s 27) and the Cs own less-than-sterling defense put them in a hole they couldn’t escape. Mini-rallies in the third and fourth quarters got things close but that early damage was indelible, allowing Miami to triumph 112-106.

Jayson Tatum, one of the only Celtics to make no major mistakes this game, led all scorers with 23 points and added 7 rebounds, a dime, a steal and a block. Jaylen Brown nearly matched that strength with an 18 point, 10 rebound performance. Gordon Hayward and the still-minutes restricted Kemba Walker dropped 15 apiece, and centers Daniel Theis and Enes Kanter had 11 and 10. That was pretty much all of the scoring; Miami beat it by spreading it around evenly.

No one scored for over 2 minutes, until Heat rookie Kendrick Nunn opened things up with a jumper.

Just gonna leave that there. The Celtics’ overall offense didn’t look particularly spry, though there were still dynamic moments:.

Substantial off-ball screen by Kemba to set up Jaylen with an advantage to attack pic.twitter.com/f55cMCTJQL

We like 'stache Gordon. 👨#Celtics Rewind is Presented by @TMobile
Watch on @NBCSBoston or stream: https://t.co/Xmx7Whh8Zt pic.twitter.com/6CGb2wmzt2

(I will use your video tweets, NBC Sports Boston; that doesn’t mean I will forgive you for laying off Abby Chin today.)

Strong three-point shooting kept Miami ahead for much of the first quarter—unsurprising; they lead the league at that, by percentage—though Hayward, Tatum and Brown made sure Boston stayed close on their heels.

The Heat, in this iteration, aren’t what you’d call a defensive powerhouse (11th and 12th in points allowed per game and per 100 possessions, respectively), but showed an uncanny knack for locking up the Celtics during the early Q2 minutes. Guard play from the Cs was especially meh, but if we’re being honest, only Tatum seemed to be scoring with any ease.

Heat are running their offense to perfection. Robinson/Herro through a maze of screens. If that's not there, immediately into PnR as Boston scrambles.

Boston outpaces Miami in points scored and opponent points allowed, per game and per 100. But you’d never know it by the look of this contest.

Celtics continue to take years off my life pic.twitter.com/P88sONVK6o

The deficit in the first half’s final minutes was far from insurmountable, but it was still discouraging, given that a Cs-Sixers first-round playoff matchup seems quite likely at the moment. (Then again Philly’s defense appears to have morphed into a garbage fire in the bubble, so who the hell knows?)

Jayson Tatum leads the C's with 10 points followed by Gordon Hayward with 9 points and 4 rebounds. pic.twitter.com/dYqsfUDOf2

As a halftime aside: I don’t think Tony Brothers actively makes officiating decisions to shape the narrative of games the way that Scott Foster does (yes I’ve said that before; no I will not stop saying it anytime soon, so stop asking), but his rigidity is legendary, and often seems to surface in Celtics games. It certainly surfaced tonight. Just look at Bam Adebayo’s number of trips to the line. So yeah…he deserves the slander below.

Tony Brothers got so much Beijing in his hair, he’s about to get a letter from a Senator. pic.twitter.com/6FzbR9hsyC

Things started to look something more like “insurmountable” with Boston seeming to show no adjustments when they returned to the court in Q3 and Miami creating more and more of a deficit. The Cs offense just couldn’t get itself unstuck…until Jaylen Brown decided to unstick it.

Jaylen Brown turned the energy way up and it's made all the difference to get the Celtics back in the game.

Jaylen is playing to topple the police state

no one wants to meet JB at the rim 🔥🔥 pic.twitter.com/ICVUxDNHca

And then Miami widened its gap again after Boston had cut it as low as one point, and…yeah, the Cs were definitely making a handful of dumb fouls here and there (with Marcus Smart making some of the dumbest), but officiating definitely played a role.

At that time the Heat as a team had gotten to the line 25 times.

remember when the Celtics cut it to one and the refs decided to give Miami 3 points and the ball? me too. that was fun

Uncharacteristic brain farts by Brad Wanaker didn’t help. Specifically, it was an absurd succession of events—turnover, Wanamaker completely looking gobsmacked, and then fouling Adebayo in an obvious and dumb way.

Wanamaker should be benched for that 20 seconds

The refs might be making the game worse with too many whistles, but they also play pickleball together. Makes you think

Officiating throughout all of these restart games has been overly aggressive; if you put both teams in the bonus with ample time on the clock, as this crew did, it motivates the players to flop, which Miami players did with particular enthusiasm. Smart, so often called a flopper by people outside of Celticsland, was not part of this, considering he’d fouled out.

Smart fouled out. Tatum has 5 fouls. Walker has about 6-7 minutes left.

Boston is going to need a lot from Brown and Hayward the rest of the way.

But there were signs of life going into the final frame, with Kemba sticking a halfcourt triple to beat the buzzer and Tatum continuing to look like the team’s best player.

At long last the Cs, had started to look like the team we recognized from much of the regular season. Jaylen Brown led the charge for a long stretch to start Q4 while Tatum and Hayward rested, assisted by Enes Kanter on the offensive end and a melange of bench players.

None of it was enough to overcome earlier mistakes. Officiating frustrates and annoys, but it’s rarely the sole reason games are lost, and for this one, almost every player who saw the court made one or more notable mistakes. And sometimes a bunch of goofy-looking white dudes named Tyler and Duncan come along and bomb a ton of threes, and that’s that.

The Edmonton Oilers have just 14 games remaining in this truncated 2020-21 season. Two of them, against the Vancouver Canucks and (…)